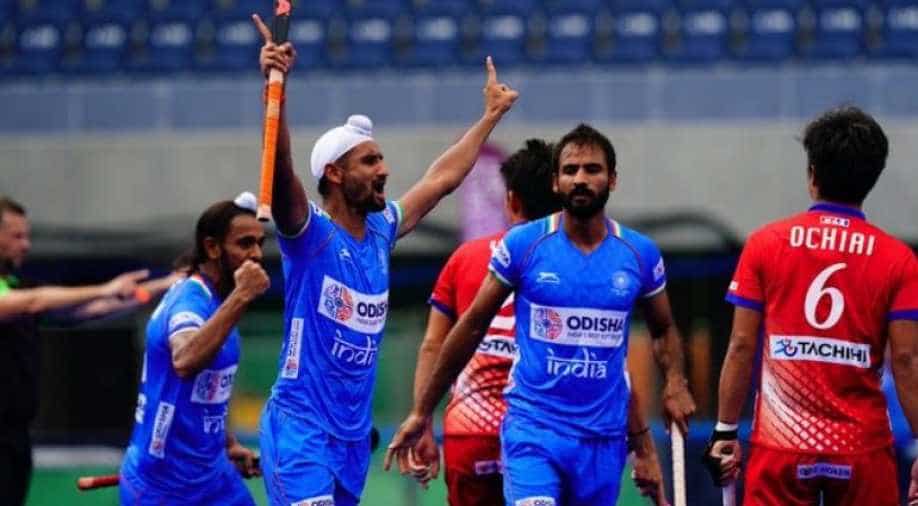 The Indian men's hockey team registered a 6-3 win over Japan in their third match of the Olympic Test Event at the Oi Hockey Stadium here on Tuesday to reach the final of the tournament.

Mandeep Singh displayed a brilliant form as he scored thrice in the game. Nilakanta Sharma found the target first through a field goal in the third minute.

India were awarded a penalty corner four minutes after Sharma's goal and Nilam Sanjeep Xess made no mistake, taking lead to 2-0. Mandeep Singh did not take much time to consolidate the position as he netted in the ninth minute.

Kentaro Fukuda opened the account for Japan striking in the 25th minute. However, impeccable goals by Mandeep Singh in the 29th and 30th minute took the tally to 5-1.

Japan's Kenta Tanaka fought back and scored in the 36th minute. India registered their sixth goal through Gurjant Singh in the 41st minute.

After a hiccup in the previous game, #TeamIndia are back to winning ways as they book their berth in the FINALS. 💪 🇮🇳#IndiaKaGame #ReadySteadyTokyo #Tokyo2020 #INDvJPN @WeAreTeamIndia pic.twitter.com/flOg7JAJbE

Japan launched an attack in the fourth quarter and succeded in the 52nd minute.

#TeamIndia are back on track as they defeated the hosts 6-3, that included a hat-trick by star Striker @mandeepsingh995, powering 🇮🇳 into the Finals against New Zealand on 21st August: https://t.co/bQhZel7QSb#IndiaKaGame #ReadySteadyTokyo #Tokyo2020 #INDvJPN @weareteamindia pic.twitter.com/Q9Y9pBnOos

Shortly before the final whistle, India saved a penalty corner. India will play against New Zealand in the final tomorrow.