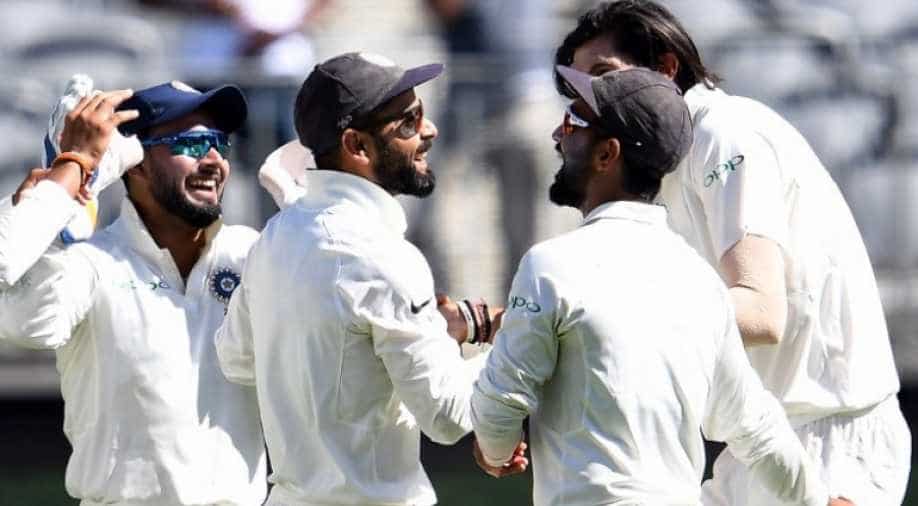 Here is the scoreboard of first Test.

U. Khawaja c Pant b Yadav 5

Australia were at 277 after losing six wickets on the first day of second Test in Perth on Friday.

A crucial wicket for team India.

Pat Cummins in at number eight.

Vihari strikes again. Picks up the wicket of Shaun Marsh.

The second session belongs to India as they got three crucial wickets, as the bowling prove their mettle.

India's bowlers fought back with three quick wickets after lunch to curb Australia's promising start to the second Test in Perth on Friday.

At tea in the inaugural Test at the new Perth Stadium, Australia were 145 for three after winning the toss. Shaun Marsh was batting on eight and Peter Handscomb was on four.

Finch lived dangerously at times and narrowly survived successive lbw appeals early in his innings, one of which cost India a DRS review, to notch his second Test half-century.

Harris looked composed and the pair added 112 on a wicket with a distinctly green tinge that appealed to the four-pronged Indian pace attack, before Finch's luck ran out and he was trapped in front by paceman Jasprit Bumrah (1-29) for 50.

He had survived a confident appeal from the previous delivery and also faced a similar scenario on 20, when he was struck on the pad by the first ball bowled by seamer Mohammed Shami.

Umpire Chris Gaffaney felt the ball was going over the stumps and a review confirmed his decision, with ball tracking having it passing clearly over the bails.

Finch’s dismissal brought out-of-form left-hander Usman Khawaja to the wicket and he made just five, sparring at a short ball from Umesh Yadav and getting a thick edge to wicketkeeper Rishabh Pant.

Harris had been dropped at second slip from the bowling of Mohammed Shami on 60, he but added just 10 more before falling to the part-time spin of the recalled Hanuma Vihari.

Vihari got a ball to rise sharply off the pitch and it followed Harris as he recoiled, fending it to Ajinkya Rahane at first slip.

Harris had been there for 141 balls, but his dismissal meant Australia had lost three wickets for just 22 runs and surrendered their early advantage.

India won the first Test in Adelaide by 31 runs as they seek their first series victory on Australian soil.

They were unable to consider star spinner Ravi Ashwin and batsman Rohit Sharma, with both injured.

Ashwin, who took six wickets in the 31-run win in the first Test in Adelaide, has a side problem, while Sharma has a back injury.

They were replaced by batsman Vihari and paceman Umesh Yadav.

Hanuma Vihari strikes and got wicket of a set batsman Marcus Harris.

Paceman Umesh Yadav sends back Usman Khawaja as Australia were at 130-2 after 46 overs.

In this session so far:

In 17 overs, Australia scored 55 runs and lost one wicket.

Mohammed Shami back in attack at the place of Ishant Sharma.

The run rate has been slow down after Finch's wicket.

Usman Khawaja in at number three.

A much-needed breakthrough for India is delivered by Bumrah.

Australia are at a score of 87 without losing any wicket after 30 overs.

An excellent first session from Australia! Aaron Finch and Marcus Harris have dug in to take them to 66/0. The all-pace attack from India hasn't got much out of the Perth strip.

Under-pressure Aaron Finch not out 28 and Marcus Harris on 36.

On a pitch with a distinct greenish tinge, Harris looked solid throughout in only his second Test, smashing six fours in his 76-ball knock.

Finch, who failed in the opening Test at Adelaide, lived more dangerously and survived a review decision and mix-up between the wickets that saw him diving back into the crease to avoid being run out.

With the score on 45 and his own tally on 20, Finch was struck on the pad by the first ball bowled by seamer Mohammed Shami.

Umpire Chris Gaffaney felt the ball was going over the stumps and a review confirmed his decision, with ball tracking having it passing clearly over the bails.

The next ball Finch was also struck on the pad and again Gaffaney turned down the vocal Indian appeal. They didn't review this one but replays showed ball tracking had it clipping the top of the stumps.

India were unable to consider star spinner Ravi Ashwin and batsman Rohit Sharma for Perth, with both injured.

They were replaced by batsman Hanuma Vihari and fast bowler Umesh Yadav, with India opting for an all-pace attack.

Australia were 66 for no loss at lunch on day one of the second Test against India.

The first session belongs to Australia in the second Test at Perth.

What is so special about Perth's drop-in pitch?

India and Australia will play their second Test match of a four-match series at the brand new in Perth's Optus Stadium, which has a drop-in pitch.

Perth Stadium, which has a sitting capacity of 60,000, has succeeded the WACA as the city's premier venue for internationals.

A drop-in pitch is a pitch that is prepared away from the ground or venue in which it is used, and "dropped" into place for a match to take place.

This allows multi-purpose venues to host other sports and events with more versatility than a dedicated cricket ground would allow.

Pitch's curator Brett Sipthorpe is trying to produce the 'bounciest' pitch he can and that could very well work in India's favour.

Weighing around 30 tons, the depth of a drop-in pitch is 20-cm. It is maintained and prepared in a steel frame.

Not everyone is a drop-in fan. Purists warn such pitches -- which some grounds now favour so they can host multiple sports - remove the characteristics of different fields that made matches more unpredictable, and therefore exciting.

"With the drop-in pitch, there's more of the sameness about things from city to city, and place to place," Australian cricket historian Bernard Whimpress told AFP.

"Which makes me sort of think, why don't they just forget about the drop-in pitch and put in artificial turf or something."

The Australian openers have got them off to a good start! Finch and Harris holding steady, they're 47/0 after the first hour.

Almost same delivery as previous one, and again a LBW shout.

Shami shouts for LBW, umpire did not give.

Virat refers the decision but India lose their review.

Australia were at a score of 37 runs without losing any wicket after 10 overs.

After five overs, Australia were at a score of nine runs without any loss.

Stay tuned for quick score updates and other related news.

Both the teams are coming on the ground, it's time for the national anthem.

Australia win the toss and bat first. Umesh in for Ashwin, Vihari in for Rohit #TeamIndia #AUSvIND pic.twitter.com/OYHaub6fXG

Tim Paine won the toss and opted to bat first.

No spinner in India squad as Virat goes with four pacers.

Here is the Playing XI:

"We encourage all our players to back their strengths."

Tim Paine has backed the under-fire Aaron Finch and Mitchell Starc ahead of the second #AUSvIND Test in Perth.

Australian skipper Paine shares his view ahead of the first Test.

First Test hero Cheteshwar Pujara practices ahead of the clash.

Pujara smashed a brilliant century in first innings and a crucial half-century in the second innings of the first Test match.

.@cheteshwar1 getting a feel of things ahead of the 2nd Test #TeamIndia #AUSvIND pic.twitter.com/WUQkPIoEEX

Here is the Probable XI:

Indian pacers are sweating out at the Perth stadium during their final training sessions.

An exciting contest awaits at Perth with a lot on offer for the quicks 🔥🔥 #TeamIndia #AUSvIND pic.twitter.com/k3Y7CQ8DQF

Also watch, Ishant Sharma speaks on his fiery spell against Ricky Pointing at Perth in 2008.

Ishant Sharma vs Ricky Ponting relived@ImIshant relives his fiery spell against Ricky Pointing at Perth in 2008. Get the archives out, jog down memory lane, this one's going to give you some serious flashbacks.

India suffered a big setback on the eve of the second Test against Australia when ace spinner Ravichandran Ashwin and experienced batsman Rohit Sharma were ruled out on Thursday.

Also missing, as expected, will be young opener Prithvi Shaw, who was not considered for the opening Test in Adelaide after suffering ligament damage in a warm-up match.

"Ravi Ashwin has a left-sided abdominal strain. He is receiving treatment at the moment. He has been ruled out of the second Test," India's governing body, the BCCI, said.

"Rohit Sharma jarred his lower back while fielding in the first Test at Adelaide. He is undergoing treatment, he too is ruled out of the second Test."

Ashwin took six wickets in the first Test, which India won by 31 runs, while Sharma hit 37 and one.

Indian cricket captain Virat Kohli has said his team is "more excited than nervous" by the lively Perth pitch as the team held its final training sessions.

"We certainly get more excited than nervous looking at lively pitches now because we understand that we do have a bowling attack which can, you know, bowl the opposition out. As much as they are convinced about their attack," Reuters quoted Kohli as saying at the pre-match press conference.

The beautiful Perth stadium readies itself for its first Test 🤙🏻✌🏻😎 #AUSvIND pic.twitter.com/zaeIpmv67p

Australia skipper Tim Paine declared himself fit and ready to go for the second Test, with the hosts naming an unchanged side for the clash.

Paine suffered a finger injury in the first Test but the 34-year-old wicketkeeper confirmed he would line up in an unchanged batting order.

"Yeah, no I'm fine. I've got a few niggles everywhere but I'm not alone there, I don't think, at my age. Finger is fine, yeah," Paine told a news conference.

The two captains with the Border-Gavaskar Trophy at the Adelaide Oval 😎📸📸 #TeamIndia #AUSvIND pic.twitter.com/k0av3MzcnJ

Virat Kohli-led team India will take on Australia in the second Test of a four match series on Friday at Perth.

By virtue of that win, Kohli-led side has become the first Indian team to win the first Test match of the series on Australian soil.