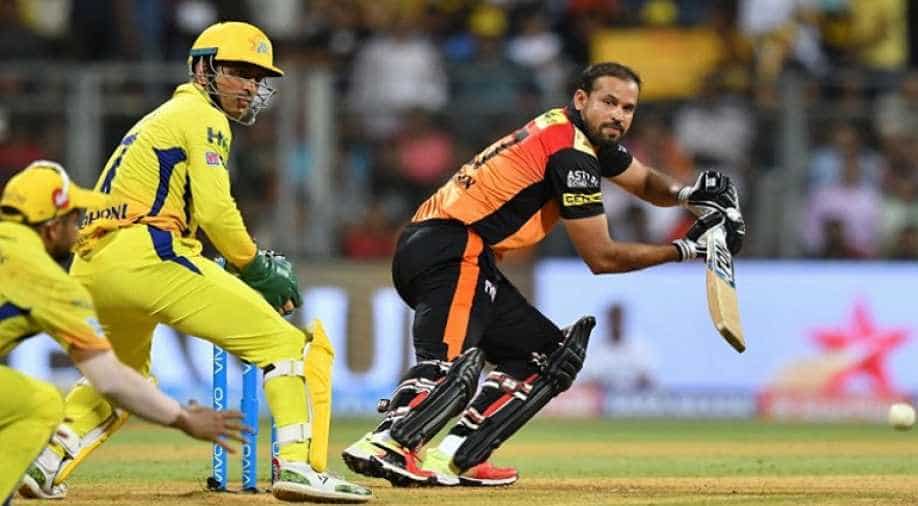 Hyderabad scored a decent 178 for six against Chennai in the Indian Premier League final at Wankhede Stadium on Sunday.

Skipper Kane Williamson left behind his poor form and played a captain's knock to settle the team.

Unlike other games, Kane took few balls to settle and then went for big shots. He made 47 runs in 36 balls which included five fours and two sixes.

He fell just three runs short to reach his 9th IPL half-century and gave away his wicket to Karn Sharma.

Later it was Yusuf Pathan and Carlos Brathwaite's cameos which helped Hyderabad cross the 150 runs mark. Pathan remained unbeaten and made 45 runs in just 25 balls. His inning included four boundaries and two sixes.

Brathwaite, on the other hand, smashed three sixes to reach 21 runs in 11 balls.

However, he gave away his wicket on the last ball of Hyderabad's innings while trying to hit another six for the team.

For Chennai, apart from Deepak Chahar, every other bowler took one wicket apiece. While it was Bravo who turned out to be the costliest today, as he gave 46 runs in his four overs.

Earlier, MS Dhoni won the toss and opted to field bowl against Hyderabad in the final of the eleventh edition of the Indian Premier League (IPL) 2018, at the Wankhede stadium.

The two teams are facing each other for the fourth time in this year's edition.

This is Chennai's seventh final in the 11 years of IPL and will be eying to clinch the title third time.

Speaking after the toss, Dhoni said, "We will bowl first. Looking at our bowling and batting, our batting will have to look to take extra pressure. The journey has been good. It is not something that you can always predict."

"There were challenges thrown at us. We had a core group of players with us but other than that it was a fresh squad. We have one change. Karn Sharma comes in for Harbhajan Singh," he added.

Kane Williamson-led Hyderabad will also be hoping to repeat their 2016 heroics.

Talking about their strategy for today, Kane said,"We would have bowled first as well. It is a fresh wicket. Finals cricket and we will look to do the job. Get a competitive total and then assess the conditions. We are looking forward to the occasion."

"Fairly new franchise squad and all the boys are raring to go. We have two changes. Sandeep Sharma comes in for Khaleel Ahmed. Unfortunately, Saha is injured and Goswami comes in," he added.