Haaland, the star product of an unlikely football factory 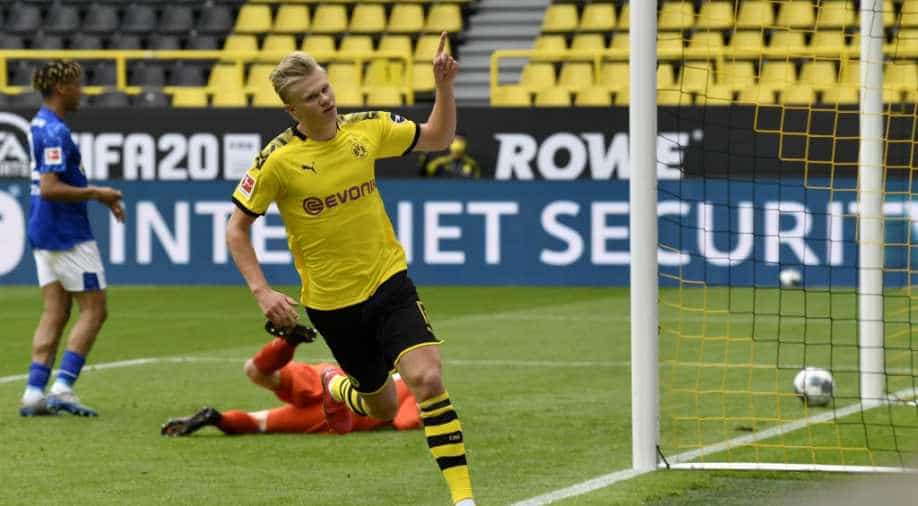 "When he was 12, he started playing with the 13-year-olds and kept scoring. When he was selected for the regional team, he scored again. Then, when he was 15, he was called up to the (youth) national team and... he scored.

The sports hall doors in the quiet Norwegian town of Bryne were always open, a welcome escape for the local children. Many football talents emerged, but one in particular stuck out: Erling Braut Haaland.

It was in this town of some 12,000 inhabitants in a country obsessed with winter sports that possibly the most exciting young footballer in the world first stepped onto the pitch.

"He always scored a lot," Alf Ingve Berntsen, a physical education teacher at the local high school who coached Haaland as a child, tells AFP.

"When he was 12, he started playing with the 13-year-olds and kept scoring. When he was selected for the regional team, he scored again. Then, when he was 15, he was called up to the (youth) national team and... he scored.

"We saw quite quickly that he could become a very big name. But we didn't think it would happen so quickly, that he would be a top scorer in the Champions League at the age of 19-20."

A tour of the town leaves little doubt about the 20-year-old's roots in the region, once the scene of an epic Viking battle.

The area around Bryne, which boasts the highest concentration of tractors in Norway, encompasses a rural hamlet called "Braut". A few kilometres away, an industrial zone bears the name "Haaland".

39 boys and one girl

Haaland was born on July 21, 2000 in the English city of Leeds, where his father Alf-Inge played until just before the arrival of his son and a transfer to Manchester City.

Haaland senior was an international midfielder who made 34 appearances for Norway and played in the Premier League for the majority of his career until his retirement through injury in 2003, aged just 30 and still a City player.

The following year he moved his family to Bryne, which is where he had broken through as a youth product in the early 1990s.

Following in his father's footsteps, the young Haaland favoured football over athletics, the favourite sport of his mother Gry Marita Braut, a former heptathlon champion for Norway.

It was here the seeds were sown for Haaland's future career, and where he met Alf Ingve Berntsen, who coached a group of 40 youngsters, 39 boys and one talented girl -- Norway youth international Andrea Norheim.

Following the philosophy of not leaving anyone behind and keeping all players engaged, everyone got the same amount of time on the pitch regardless of skills.

"Erling was small and rather lightweight, but given his genes we knew he would probably grow up to be a big guy," Berntsen remembers.

"Even though he was physically a bit inferior to the others, he scored so many goals that we thought 'Wow, imagine when he's big and strong'."

It was only years later, around the age of 15, that Haaland hit a growth spurt, soaring to 194 centimetres (6 feet 4 inches).

Throughout his youth, he and his friends supplemented their weekly or twice-weekly club practices with countless improvised sessions at the local covered 'Jaerhallen' stadium -- a rudimentary facility, but open to all.

"There wasn't much else to do in Bryne but play football, you know," says Haaland's former teammate Norheim.

"On weekends we would go out on the pitch, we didn't have to plan anything, we knew there was always someone to play with," she recalls.

Although the building wasn't heated, the roof provided a welcome respite from the winter snow or frost that ruled out street games.

"Jaerhallen gave birth to a lot of talent in Bryne that would not have been born if the hall had not existed," Andrea's father Stig Norheim, himself a former player, tells AFP.

"You could go and train there at any time. On weekends, young people would go there at nine or 10 in the morning with their packed lunch and stay there until eight in the evening," he says.

Jaerhallen may not be an eye-catching facility, but it boasts a pretty impressive record -- and the hours the kids invested in organising their own training sessions paid off.

Of the 40 youngsters, five of them -- including Haaland and Norheim -- ended up playing for Norway's national squads.

On this sunny day, high school students are kicking the ball around on the open-air field next door. Their local pride is evident, albeit subtle.

Asked who the best footballer in the world is, they answer "Messi" and "Ronaldo". But who's most promising? "Erling!"

"The fact that he comes from such a small place and plays for such a big club shows that everything is possible."