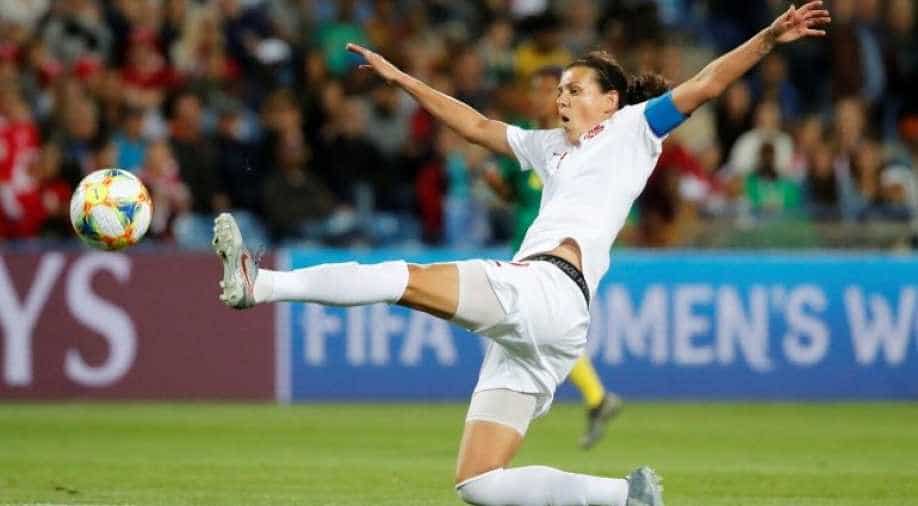 Sinclair left the game in the 47th minute and Canada ran out comfortable winners 11-0.

Canadian forward Christine Sinclair became the all-time top scorer in international soccer, breaking the mark held by American Abby Wambach when she netted her 185th goal against St. Kitts and Nevis in south Texas on Wednesday.

Sinclair, playing her 290th international, scored the milestone goal from close range in the 23rd minute of Canada's opening game at the CONCACAF Olympic qualifiers at H-E-B Park in Edinburg after tying the record with a seventh-minute penalty.

"Just unbelievable," Sinclair said on what it means to be soccer's most prolific goal scorer. "When I first started with the national team I could never have imagined standing here with the number of goals I've scored."

The 36-year-old Canadian captain opened the scoring when she scored from the spot and later tucked away an Adriana Leon cross with a right-footed shot from inside the box to make it 4-0 and take the record.

Sinclair left the game in the 47th minute and Canada ran out comfortable winners 11-0.

A #TeamCanada ⚽️ game where Christine Sinclair joined the history 📚🙌

"Christine: History is made. Your victory is our victory. We celebrate with you," Wambach, who amassed her 184 goals over 255 games, posted on her Twitter account shortly after Sinclair surpassed her total.

"And to every girl coming up in the Pack with a dream to achieve that which doesn't yet even exist: We believe in you. Your Pack is with you. And history awaits you."

Wambach, who retired in 2015 after a 15-year career, had sole possession of the goalscoring mark since 2013 when she broke fellow American Mia Hamm's record of 158.

Sinclair has been the backbone of the Canadian team since making her debut as a 16-year-old at the 2000 Algarve Cup where she scored her first international goal.

She has established herself as one of the best players in the women's game and has competed at two Olympics, including in 2012 where she was the tournament's leading scorer with six of Canada's 12 goals.

"We have watched her grow from a teenage star on the local grounds to an international superstar who is adored around the world," said Canada Soccer President Steven Reed.

CONCACAF President and FIFA Vice-President Victor Montagliani also offered congratulations and thanked Sinclair for her contribution to the sport.

"To have scored an all-time international record goal haul, and to still be going strong, is truly outstanding. Christine's achievements have made her an icon in Canada," said Montagliani.

"She transcends the sport and is a wonderful role model for people across the country."