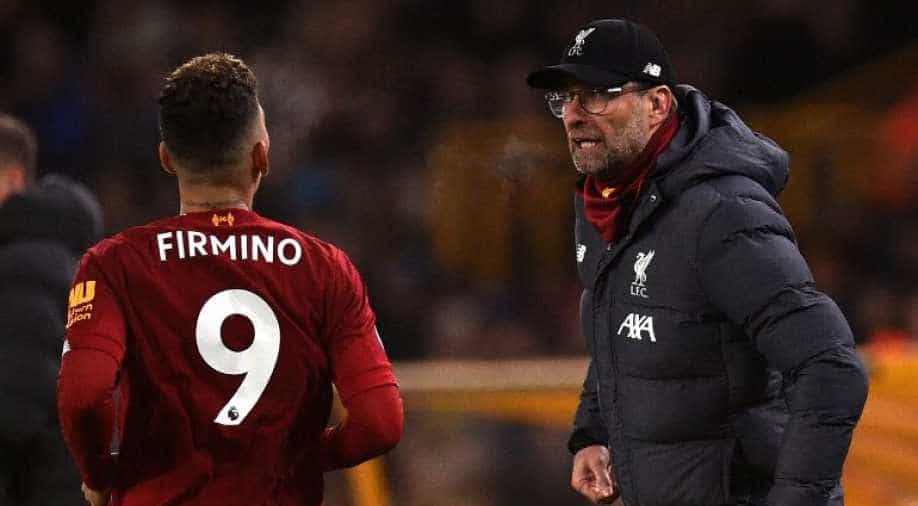 Set-pieces have been one of the keys to Liverpool's success and a well-worked corner got the visitors off to a flying start as Henderson headed home.

Liverpool manager Jurgen Klopp hailed another moment of magic from Roberto Firmino as the Brazilian's late winner opened up a 16-point lead at the top of the Premier League with a 2-1 victory at Wolves on Thursday.

Liverpool were even grateful to goalkeeper Alisson Becker for not falling behind in the second half.

However, like crucial victories against Leicester, Aston Villa and Crystal Palace earlier in the campaign, Liverpool left it late to snatch another vital three points in their quest to end a 30-year wait to win the title as Firmino smashed home six minutes from time.

"You just have to find a way to win and have someone who makes the perfect decision and that was Bobby again," said Klopp.

"A worldie I would say from Bobby, a super goal."

Liverpool, who now have 22 wins in 23 league games this season, also have a game in hand over second-placed Manchester City to come.

However, victory could still come at a cost as Mane hobbled off with a hamstring injury in the first half.

"We don't know exactly (the severity of the injury). He felt something in the hamstring," added Klopp, whose side are also still in the hunt for the FA Cup and Champions League.

Defeat leaves Wolves still six points off the top four in seventh, but Nuno Espirito Santo's side showed why they are on form the most likely challengers to fourth-placed Chelsea for a place in next season's Champions League.

"It was a fantastic game of football," said Nuno. "We have to keep going and keep getting stronger."

Nuno's one regret from his side's display was the manner of the opening goal.

Set-pieces have been one of the keys to Liverpool's success and a well-worked corner got the visitors off to a flying start as Henderson headed home.

Matt Doherty should have levelled shortly afterwards before Liverpool's threat on the counter-attack was curtailed when Mane pulled up.

The Senegalese's absence for a few weeks is unlikely to sway the momentum of the title race, but he could now be a doubt for the first leg of Liverpool's Champions League last 16 tie at Atletico Madrid next month.

Jimenez and Adama Traore were left on the bench when the sides met in late December just two days after they had scored in a thrilling 3-2 win over Manchester City and Wolves' two most dangerous attacking weapons made a huge difference.

"Not only on the wing any more, but he keeps the ball, holds the ball and sets up goals."

The Spaniard's pace was too much for a Liverpool defence that had kept seven consecutive Premier League clean sheets to handle six minutes after the break.

Traore's run down the right pulled Van Dijk out of the centre of the defence and his pinpoint cross found Jimenez to bullet home his 20th goal of the season.

That was the first goal Alisson had conceded in the league for two months and the Brazilian had to be at his best to then turn a Traore drive to safety and stand up bravely to block from Jimenez.

Firmino looked to have missed the chance to claim all three points when he fired into Patricio's legs with just the Portuguese number one to beat.

But he quickly made amends with a thumping finish from Henderson's pass.