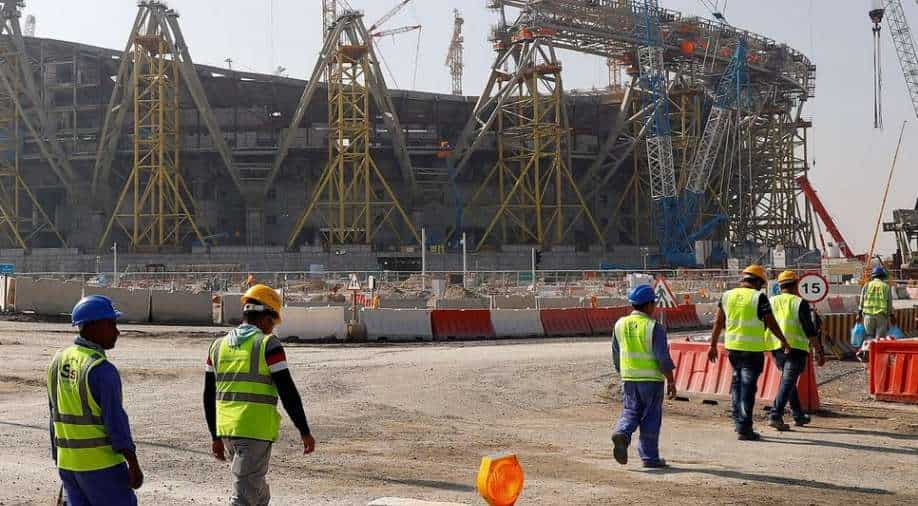 File photo: Workers walk towards the construction site of the Lusail stadium which will be build for the upcoming 2022 Fifa soccer World Cup during a stadium tour in Doha, Qatar. Photograph:( Reuters )

"This report has led to a broad discussion in Dutch society and in parliament," said Dutch foreign ministry spokesman Jeroen van Dommelen.

The Dutch government has postponed a trade mission to Qatar this month, citing concern over living conditions of migrant workers helping the tiny Gulf state to prepare for next year`s soccer World Cup.

Britain`s Guardian newspaper last week reported that its calculations showed that at least 6,500 migrant workers who worked on the stadiums and other infrastructure for the World Cup have died in Qatar in the past 10 years.

"This report has led to a broad discussion in Dutch society and in parliament," said Dutch foreign ministry spokesman Jeroen van Dommelen.

"We have talked before with Qatar about the poor conditions for these workers, but these numbers give the discussion a new meaning. We want to hear Qatar`s response before we can think of a new date for the mission."

The trade mission, which was to be held as a video conference due to coronavirus related travel restrictions, was scheduled for March 22 to April 1.

Qatar had not responded yet to the Dutch government`s decision, Van Dommelen said.

A majority of parties in Dutch parliament last week called on the government and King Willem-Alexander to stay away from the World Cup next year in protest against the treatment of migrant workers.

Qatar announced changes to its labour laws last August, raising the minimum wage by 25% to 1,000 riyals ($275) a month and scrapping a requirement for workers to obtain permission from their employers to change jobs.

Dutch trade minister Sigrid Kaag, who is running as leader of the medium-sized centre-left D66 party in Dutch elections this month, last week said she wanted the Netherlands to boycott the World Cup, though foreign minister Stef Blok said he preferred to keep an open dialogue with Qatar.