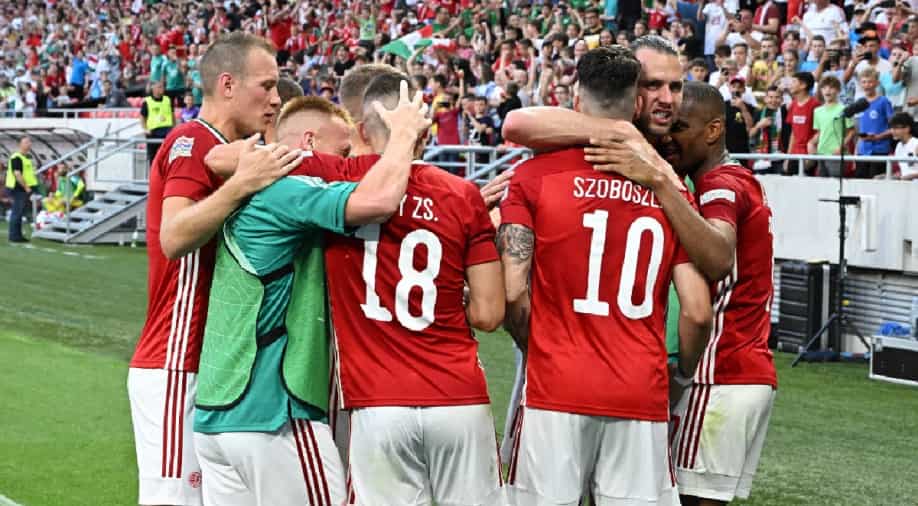 Hungary pulled off a shock 1-0 win against England in Nations League. Photograph:( AFP )

Dominik Szoboszlai scored a match-winning penalty in the second half to help Hungary pull off an upset against England in the Nations League on Saturday.

A second-half penalty from Dominik Szoboszlai earned Hungary a shock 1-0 win over England in the Nations League on Saturday - their first victory against Gareth Southgate's side in 60 years. Looking to get their preparations for the Qatar World Cup, which begins later this year, up and running, England were surprisingly second best from the off in Budapest, and were fortunate to go into the break all square.

The hosts kept coming and made their pressure count as Szoboszlai converted from the penalty spot in the 66th minute after Zsolt Nagy was fouled by Chelsea defender Reece James - a decision which incensed the England players.

England pressed as they looked for a leveller, but they could not create that killer chance as their Nations League campaign got off to a disappointing start. The tests keep coming with Germany England`s next League A, Group Three opponents on Tuesday, while Hungary will look to make it five wins in six when they face European champions Italy.

"We`ve got a massive game coming up on Tuesday," England defender Conor Coady told Channel 4. "We need to look at this performance and learn from it very quickly.

"I thought we started off quite well. We need to tidy up and bounce back. We need to look at how we performed and how we move forward because these are big games for us."

Hungary were forced to host England `behind closed doors` after being disciplined by both FIFA and UEFA for repeated racist behaviour from their fans, but the Hungarian FA said last month that children could attend the match at the Puskas Arena.

Under Article 73 of UEFA`s disciplinary regulations, children up to the age of 14 from schools and/or football academies can be invited to a `behind closed doors` match free of charge, provided they are accompanied by an adult, meaning the stadium could be half full, mostly with children.

Some of those in attendance chose to boo the England players as they took the knee in protest against racial injustice before kick-off. The most unfancied team in Nations League League A, Group Three, Hungary almost gave their youthful support something to shout about early on as Coady was forced to clear off the line after Szoboszlai had bundled the ball towards goal.

England, who handed debuts to West Ham United`s Jarrod Bowen and Leicester City defender James Justin, failed to make any inroads in the first half, as Adam Szalai almost scored a sensational opener from the halfway line.

The visitors improved after the break, with substitute Bukayo Saka seeing an effort well saved, before Hungary did take a deserved lead, but the decision from the Portuguese referee was one that did not sit well with England.
James seemed to lead with his arm, which did catch Nagy, who went down very easily. Szoboszlai`s finish from the spot was emphatic.

England committed more forward after falling behind, with Coady glancing a header agonisingly wide from a free kick. Otherwise, the hosts were comfortable, seeing out their victory, a first in 15 attempts since a win at the 1962 World Cup in Chile, with ease.