Doesn't matter if you're the second-best team in the world, you've still got to defend 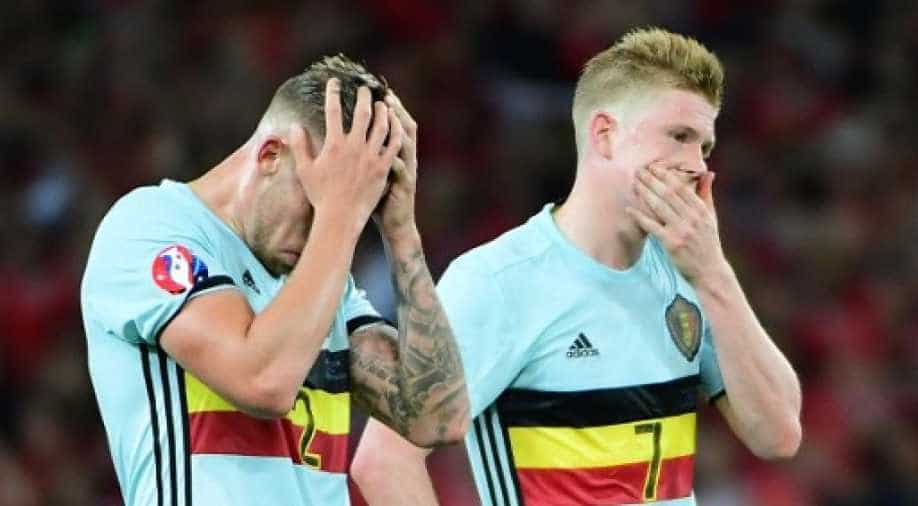 Belgium had come into the tournament without Manchester City's injured Vincent Kompany, possibly the most accomplished centre-back in the English Premier League, but then also lost Thomas Vermaelen to suspension and Jan Vertonghen to injury. Photograph:(AFP)
Follow Us
Wales's Euro 2016 victory over Belgium, officially the second-best team in football, showed again that you can have all the attacking talent in the world -- but you will be found out if you are weak at the back.

Injuries and a suspension forced Belgium coach Marc Wilmots to start Friday's quarter-final with Jason Denayer at centre-back and the inexperienced 21-year-old had a horror night that is likely to haunt him for the rest of his career.

Belgium had come into the tournament without Manchester City's injured Vincent Kompany, possibly the most accomplished centre-back in the English Premier League, but then also lost Thomas Vermaelen to suspension and Jan Vertonghen to injury, for the last eight clash.

Belgium has strong attacking and creative talents but even as they dominated the early stages and led through Radja Nainggolan's long-range strike, Denayer and stand-in left-back Jordan Lukaku looked ill at ease which gave huge encouragement to the Welsh.

Denayer spent last season on loan from Manchester City to Turkey's Galatasaray, following another loan year at Scotland's Celtic, but Friday's performance showed that he would have been better off staying with his parent club and learning from Kompany.

With the four defenders barely on first-name familiarity, it was perhaps no surprise that they were left scattered and confused by Wales's 'conga' approach to a corner as captain Ashley Williams easily escaped Denayer to head in the equaliser.

The Welsh captain should have got a second soon afterwards when they performed the same trick, with the same confused response from their supposed markers.

The low point for Belgium defence, and the moment that ultimately ended their interest in the tournament, came in the 55th minute when Hal Robson-Kanu, a player without a club having just been released by English second-tier side Reading, collected the ball with his back to goal just inside the box.

One clever turn shrugged off the attention of Thomas Meunier and Marouane Fellaini, while Denayer seemed to have spotted the ghost of another player entirely as he inexplicably flew past and far beyond the action, giving Robson-Kanu all the time and space he needed to smash the ball home.

Belgium were still in the game and cranking up the pressure when Denayer's final blunder, another shocking wander into a defensive no-man's land allowed Chris Gunter's cross to sail over his head and straight onto that of substitute Sam Vokes, who powered home for Wales to wrap up a 3-1 win.

"We came up against a very good team and it was very difficult to compensate for the loss of Vermaelen and Vertonghen, really experienced, talented players, it was very hard to do without them," said Wilmots.

"You sometimes have to take risks and play the youngsters. You learn from tough times so it is not all lost."

Not all, but this match, and Belgium's best chance of lifting a major trophy for the first time is lost, certainly with Wales now looking forward to facing Portugal in the semi-finals.