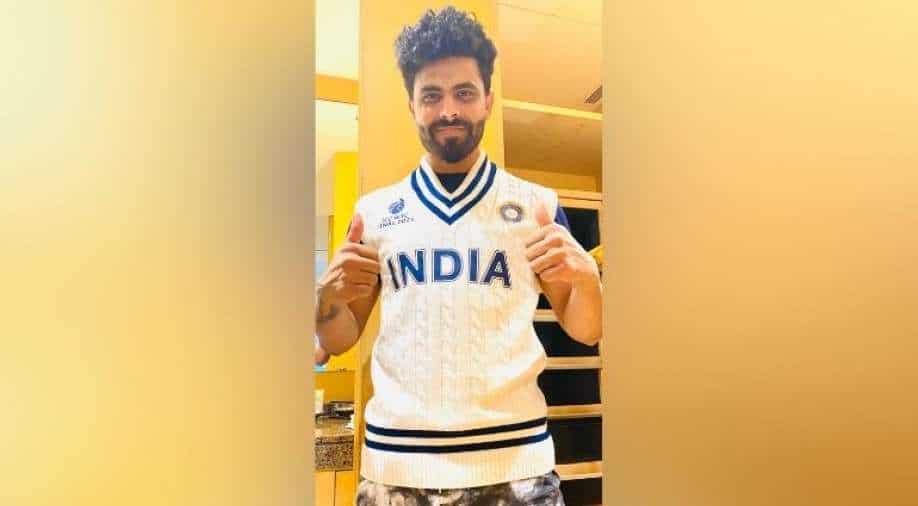 The brand new jersey is India's retro Test uniform. The sweater has a blue V-neck border, which used to be a regular feature in Test cricket of till the 90s.

India's star all-rounder Ravindra Jadeja took to social media on Saturday and revealed a brand new jersey that Team India will don as they take to pitch when they face New Zealand in the World Test Championship finals which is scheduled to be played at the Ageas Bowl in Southampton from June 18.

The brand new jersey is India's retro Test uniform. The sweater has a blue V-neck border, which used to be a regular feature in Test cricket of till the 90s.

“Rewind to 90’s #lovingit #india ,” Jadeja captioned the photo he tweeted on Twitter.

With less than a month away from the juggernaut clash between New Zealand and India, several players and cricketing experts have predicted which team will win the inaugural World Test Championship.

The event has now been granted an exemption by the UK government as outlined in The Health Protection (Corona Virus, International Travel, and Operator Liability) Regulations 2021, released on 17 May 2021.

As per the bio-safety protocols established for the event, in line with UK government and Public Health England requirements, the Indian Men’s team will arrive in the UK on 3 June 2021 via a charter flight and carrying evidence of a negative PCR Test. Prior to traveling, the party will have spent 14 days in a bio-secure environment in India during which regular testing will have taken place. Upon landing, they will proceed directly to the on-site hotel at the Hampshire Bowl where they will be tested again before commencing a period of managed isolation.

Both teams have duelled with each other, where New Zealand came out as winners. However, Team India, who fought all odds to book their place in the finals, will be looking to redeem themselves from these losses and settle the score.