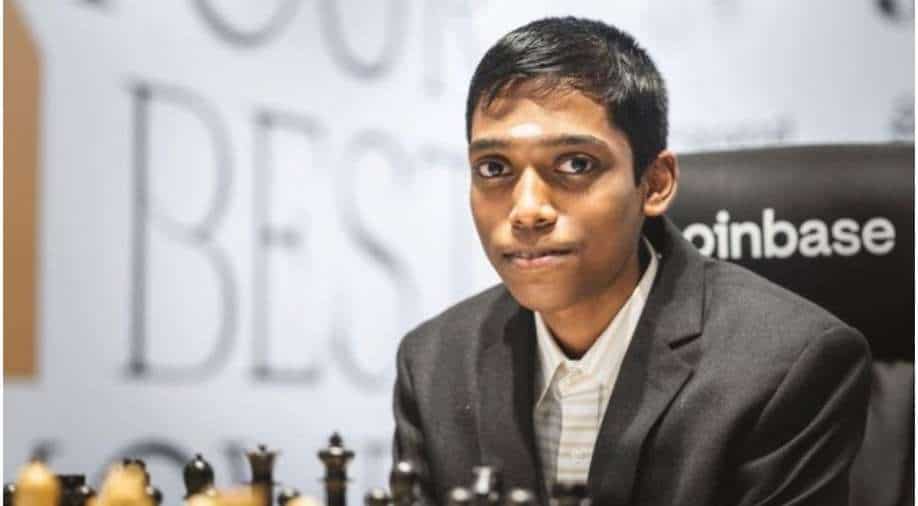 The 16-year-old from Chennai showed off all his skills as he simply overpowered the super-strong Dutch No.1 Giri to set up a summit clash with China`s World No. 2 Ding Liren, who stunned World No. 1 Magnus Carlsen in the other semifinal.

India`s boy wonder Rameshbabu Praggnanandhaa came up with another sensational performance as he defeated Dutch Grandmaster Anish Giri to storm into the final of the Chessable Masters, the fourth leg of the USD1.6 million Champions Chess Tour.

The 16-year-old from Chennai showed off all his skills as he simply overpowered the super-strong Dutch No.1 Giri to set up a summit clash with China`s World No. 2 Ding Liren, who stunned World No. 1 Magnus Carlsen in the other semifinal.

Praggnanandhaa took lead with a checkmate in the second game of the best-of-four games semifinal encounter. But after two draws, Giri, a Dutch GM of Nepalese origin, returned the favour in the must-win fourth game to draw level at 2-2.

However, he blundered in the first tiebreak game and Pragg capitalised on it to win 2-2, 1.5-0.5. With this win, Praggnanandhaa also sealed his place in the season finale of the Champions Chess Tour, which will be played in November this year.

Giri had gone into the match unbeaten and in red-hot form having topped the USD150,000 event`s Prelim stage leaderboard. But the 29-year-old ran into one of the world`s top talents truly coming of age. Incredibly, schoolboy Pragg has something equally important to do first on Wednesday -- he has to tackle his class 11th exams.

"I have to be at school around 8:45am. And now it`s 2am," he was quoted as saying by the organisers, the Play Magnus Group. And then after the exams a few hours of rest, he will be back at his computer for the final clash with Ding Liren.

Tuesday`s semifinal clashes delivered incredible drama as they involved the four top players from the Prelim stage, all in great form. Pragg`s match with Giri caught fire in the second game after a tame first encounter ended in a draw.

The youngster set Giri a deadly trap in the endgame and the 29-year-old missed the only defence. Checkmate was guaranteed and Pragg took the lead. Giri had lost his first game of the tournament, the organisers said in a release.

The third game was another cracker. With Giri needing a win, the advantage switched several times. As Giri looked set to break through in the endgame, Pragg found a way to dig in and force a draw. The youngster was 2-1 in front with one game to go.

An astonishingly tricky game that followed let Giri back in. Pragg defended brilliantly but one slip when the position was on a knife`s edge and Giri was onto it. The game ended with a beautiful checkmate on the board and the match locked at 2-2 and heading to tiebreaks.

Then it all went wrong for Giri. He blundered badly in the first blitz game of the play-off with a queen move (32. Qc2), handing Pragg double attack that led to a piece capture. Giri resigned in a hopeless position and looked despondent.

But the Dutchman wasn`t out yet. The second blitz game saw Giri on top before another slip gifted Pragg a pawn. There was no way back. A draw was agreed, but it was the same as a win for Pragg who was through to the final.

In contrast, Carlsen vs Ding was a match of extreme, slow-burning pressure. To add to the intensity, Carlsen found himself plagued early on by internet connection problems at his base for this event in Skagen, Denmark.

After three tense draws, where both players probed but couldn`t crack their opponents` defences, it all came down to the fourth and final game.

And then, a moment no one expected: Carlsen cracked. Ding broke through and went on to win. Carlsen had failed to make the final for the first time in the 2022 Tour.

Carlsen, however, presented a brave front. "I`m ok. I`m really disappointed with my play in the last game, but I think overall this match could have gone either way. I`ve played a lot of close matches with Ding and this one went his way which is disappointing but, yeah, that`s what it is," Carlsen was quoted s saying by the organisers.

A triumphant Ding, playing from Wengzhou in China, said he was "very happy" and the result was "unbelievable".

Ding added, "I`ve played him so many times and I haven`t beaten him in any of the knockout stage in the Champions Chess Tour. It`s my first time."