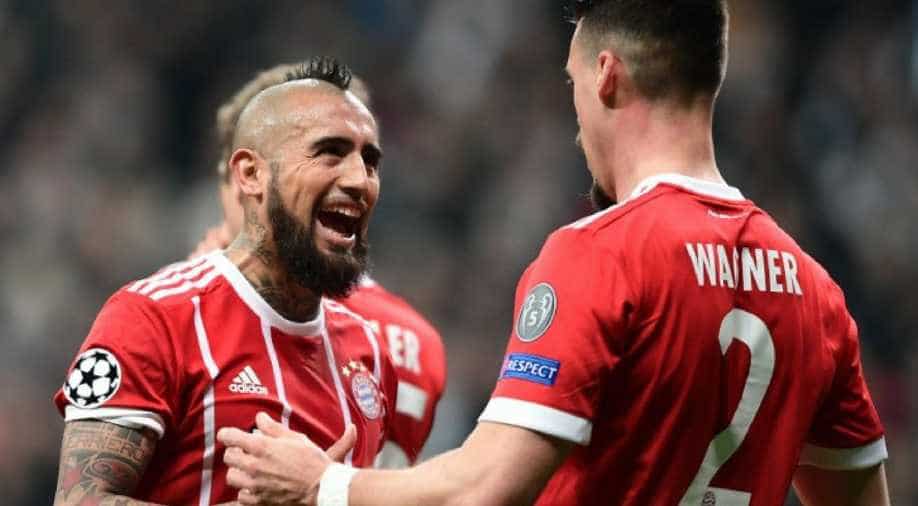 A Thiago Alcantara strike and Sandro Wagner's first Champions League goal capped Bayern Munich's 3-1 win at Besiktas on Wednesday as the German giants cruised into the quarter-finals for the seventh year in a row.

Bayern completed a comprehensive 8-1 aggregate victory in Istanbul, having effectively clinched the last-16 tie following a 5-0 rout last month in the first leg in Munich.

For Bayern coach Jupp Heynckes, who replaced Carlo Ancelotti in October, this was his 11th straight win in the Champions League which set a new competition record.

"It was a convincing result," said Heynckes. "Besiktas hadn’t lost here in the Champions League, so it wasn’t easy.

"We scored at the right times and it's normal that we dropped off a little -- losing some focus after winning 5-0 is just human.

"The only negative today is that we picked up too many yellow cards," he added after defenders Jerome Boateng, Mats Hummels and Rafinha all earned bookings.

After Thiago fired home early on, an own goal by Besiktas right-back Gokhan Gonul put Bayern 2-0 up right at the start of the second half.

With their team 7-0 down overall, Besiktas finally came to life, grabbing a consolation goal by Vagner Love.

But Bayern notched their third of the evening when backup striker Sandro Wagner came off the bench to mark his Champions League debut with his first goal at this level.

"We lost the ball a lot, especially in the second half and we didn’t have the structure in our game that we had wanted."

Having resisted the urge to name a weakened team after their first-leg romp, Bayern wasted little time taking the lead against the Turkish champions.

It was a surprise move by Heynckes with tough Bundesliga games against RB Leipzig and Borussia Dortmund to come this month.

Nevertheless, Lewandowski played until the 67th minute but failed to add to his 32 goals this season in all competitions.

Thiago, back after injury, celebrated his first Champions League goal since netting in the 3-0 win at home to Anderlecht last September.

With 18 minutes gone, Bayern captain Thomas Mueller swung in a cross and the Spain international thumped the ball home from close range.

After claiming Bayern's 100th goal this season, Thiago was forced off on 35 minutes -- attacking midfielder James Rodriguez replaced him as the Colombian made his return from a calf injury.

Hummels, who along Jerome Boateng was booked in the first half, was replaced by Niklas Suele at the break before Bayern extended their lead thanks to a Besiktas own goal.

Right-back Rafinha whipped in a cross, but with the Besiktas defence focused on preventing the ball reaching the lurking Lewandowski, Gonul turned the ball into his own net.

Besiktas pulled a goal back on 59 minutes when David Alaba lost possession deep in his own half, allowing Gonul to supply Love who did just enough to roll the ball over the line.

Alaba atoned with a crucial block to deny Besiktas forward Mustafa Pektemek soon after, and the Austrian setup Wagner on 84 minutes as his deflected cross was chested over the line by the substitute.