'Brothers from across the border': Pritam Kotal lends a helping hand to Bangladesh striker Jibon 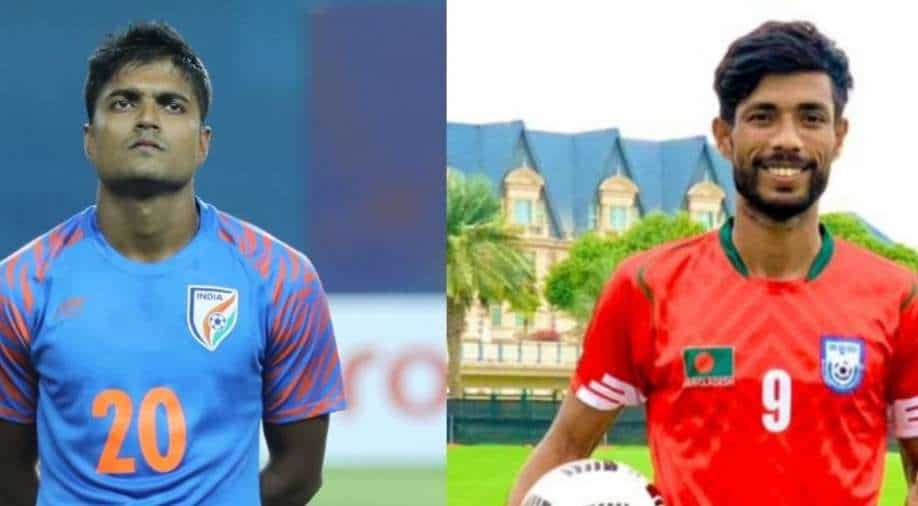 'Brothers from across the border': Pritam Kotal lends a helping hand to Bangladesh striker Jibon Photograph:( Others )

Many footballers face rather difficult times when they need to go under the knife to correct injuries sustained on the pitch. It is not only the physical recovery that they have to deal with, but they are also constantly mindful of the uncertainty of the recovery process, and how long it could take.

Many footballers face rather difficult times when they need to go under the knife to correct injuries sustained on the pitch. It is not only the physical recovery that they have to deal with, but they are also constantly mindful of the uncertainty of the recovery process, and how long it could take.

However, even in such trying times, the ‘Beautiful Game’ has its own way of bringing people together. Bangladesh National Football Team striker Nabib Newaj Jibon had come across the border to Kolkata for surgery earlier in April, only to find a guardian angel in someone who he barely knew prior to this trip to the ‘City of Joy.’

"Yes, I had heard about him. I have played against him for my National Team. But we were never properly acquainted.”

In fact, it was one of Jibon’s teammates from the National Team, Raihan Hasan, who introduced the Bangladesh striker with the Blue Tigers defender.

“I’ve been well acquainted with Mamunul-bhai (Islam) and Raihan. In fact, it was Raihan, who took a lot of initiative and approached me about Jibon. I was told that he was coming to Kolkata, and requested me to look after him during his stay here,” said Pritam.

Once Jibon was in Kolkata, he had set up at a hotel that was quite close to Pritam’s house, and the latter, along with his girlfriend Sonela Paul left no stone unturned to help Jibon.

“Pritam-da and Sonela-di both provided so much support when I was there in Kolkata,” Jibon mentioned. “The main thing that they provided me was the mental support. That was very important -- especially because I was in a city where I did not know anybody.”

“They used to visit me every day at the hospital, and at my hotel. I could not move around much after my surgery. But they would often come around and get different things for me – whatever I’d require. They’d even check on whether I’ve had my meals properly every day, and that meant a lot,” Jibon continued.

While Pritam could not go visit Jibon towards the end of the latter’s stay due to certain COVID-safety protocols in his locality, it was Sonela who stepped up and made sure that the Bangladesh striker was able to get back across the border, despite the fact that his flight was cancelled.

Pritam sent his driver and his car along with Sonela, to pick up Jibon and take him all the way to the India-Bangladesh border in Benapole, near the town of Bongaon.

“We also contacted the Petrapole immigration authorities and, got a permission from them. The BSF at Benapol also helped a lot. They reached in the morning, but there was a long wait till the evening, and finally he was allowed to cross the border,” said Pritam. “There were some difficulties, but the good thing is that the surgery was successful, and that he was able to get back across the border without much hassle.”

Jibon’s club Basundhara Kings are set to play against Pritam’s side ATK Mohun Bagan in the AFC Cup in May, whereas Bangladesh are set to play India in the World Cup Qualifier in Qatar, later this year. While the now recovering Jibon may be out of contention for both the matches, the two footballers who had forged a strong friendship in this short period of time, are looking forward to face each other on the pitch once again.

“Since his operation was successful, I’d very much like to see him return to the pitch soon. Even if he can’t return in time for the AFC Cup matches, it’s not that big a deal. I just hope that he gets well soon and can return to the pitch. It will be great to play against him. I pray to God for his speedy recovery,” said Pritam.