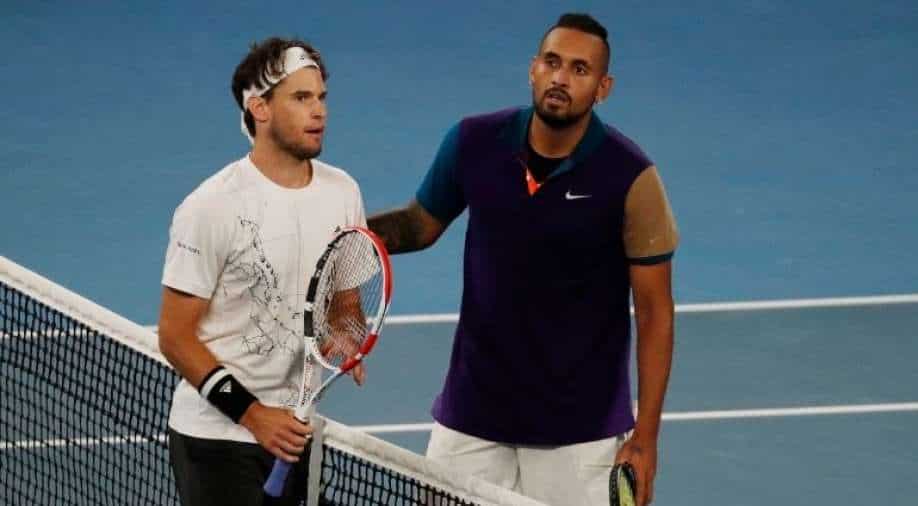 "Tonight was epic and a good last match before the lock-down, it's really sad to say."

Dominic Thiem produced a comeback for the ages to overhaul a fired-up Nick Kyrgios in a five-set classic at the Australian Open on Friday to send a baying crowd home in disappointment on the last night before a five-day lockdown in Melbourne.

In the bear-pit atmosphere of Kyrgios's favourite John Cain Arena, U.S. Open champion Thiem dragged himself off the canvas to secure a thrilling 4-6 4-6 6-3 6-4 6-4 win over the Australian showman to reach the fourth round.

"That first match against Nick here on his favourite court with an amazing crowd, there are easier things to do," said the Austrian third seed, who sealed the victory with a majestic backhand winner down the line.

"Surely that's one of the toughest challenges in our sport.

"Tonight was epic and a good last match before the lock-down, it's really sad to say."

A cluster of COVID-19 cases in Melbourne means there will be no more crowds at the Australian Open for at least five days but the home crowd got their money's worth, if not the desired winner.

Thiem was shell-shocked for the first two sets, barely able to lay a glove on Kyrgios who channelled the crowd's energy to produce some electrifying tennis.

While the tension in the stadium was relentless, it was also on a knife-edge outside the arena as police on horse-back dispersed a crowd of several hundred anti-lockdown demonstrators about an hour into the match.

Inside the arena, Kyrgios stormed to a two-set lead with an impish underarm ace.

Yet from there Thiem dug in grimly, and stole the momentum from the Australian's hands by serving like a machine.

A frustrated Kyrgios smashed his racket into the court before surrendering the third set with a bungled 'tweener'.

Suddenly it was the Australian's back against the wall as a resurgent Thiem began wielding his racket like a wand.

In a moment of madness, Kyrgios bungled another 'tweener' rather than volley into an open court, squandering the chance for a 5-4 lead in the fourth set.

Thiem made him pay with three booming returns to break and at the change of ends an angst-filled Kyrgios fired a ball high into the terraces to lose an automatic point for a second code of conduct violation.

Moments later the match was level, as Kyrgios fired wide to concede the set.

Thiem bided his time before breaking Kyrgios at 3-3 in a nerve-shredding decider.

"That's ridiculous," Kyrgios said, after watching another Thiem winner sail past him before the Austrian knuckled down to serve out the match.