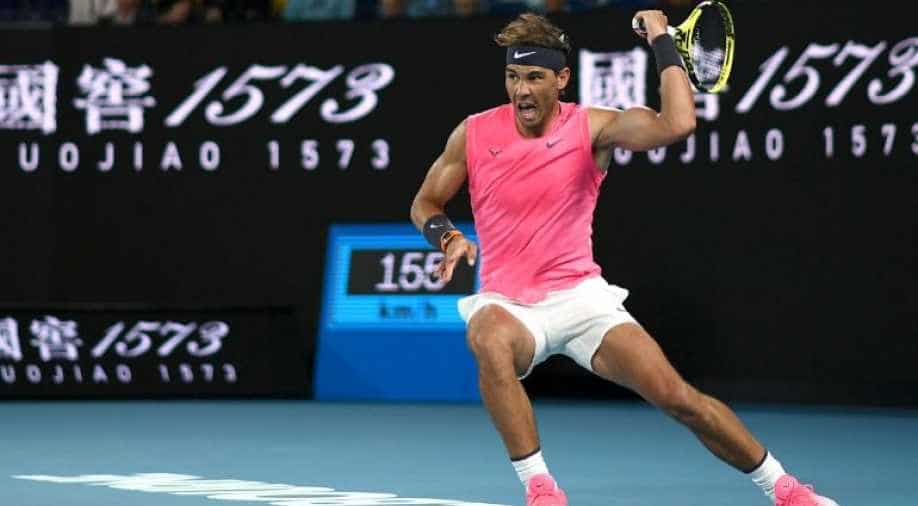 Spain's Rafael Nadal hits a return against Argentina's Federico Delbonis during their men's singles match on day four of the Australian Open tennis tournament in Melbourne on January 23, 2020. Photograph:( AFP )

Second seed Rafa Nadal overcame some stiff early resistance from Britain`s Cameron Norrie before easing into the fourth round of the Australian Open with a 7-5 6-2 7-5 victory on Saturday.

After being heckled by a loud-mouthed fan in his previous round win against Michael Mmoh, Nadal enjoyed an incident-free evening in an empty Rod Laver Arena to reach the round of 16 at a Grand Slam for the 49th time in his career.

Nadal won the opening six points, but 69th-ranked Norrie was not intimidated in his first meeting with the Spaniard and claimed the first break of the match to lead 3-2.

He was immediately broken to love though and folded at 5-6 to drop serve again and hand Nadal the first set in 48 minutes.

Thereafter it was a routine day at the office for Nadal, who dominated without ever needing to find top gear, showing no sign of the lower back injury that dogged him in the warmup.

"All the matches are tough, he came here winning a couple of very good matches. I didn`t convert the opportunities I had early in each set so the situation became a bit more difficult," Nadal, who is yet to drop a set, said.

"I`m happy, I had a few good feelings, of course I have to keep improving and tomorrow is another day to practice but into the second week and that`s the main thing for me."

Nadal`s only title in Melbourne was in 2009 but with eight-time champion Nova Djokovic suffering an injury in his third-round win over Taylor Fritz the Mallorcan might not ever have a better chance to double his tally.

He was not at his dazzling best against Norrie in a eerily flat atmosphere, a result of Melbourne`s five-day COVID lockdown forcing organisers to close the doors to fans.

But it was enough to post a 16th successive win against a fellow left-hander - a run stretching back to 2017.

A bigger test awaits on Monday when Fognini, who dispatched Australian Alex de Minaur in straight sets on Saturday.

"We`ve played a lot of times and he has beaten me before," Nadal said. "He will be hungry to play well and has had a very impressive win today so he will come with plenty of confidence.

"You don`t expect an easy round in the round of 16 so it will be tough and I have to be ready for it."