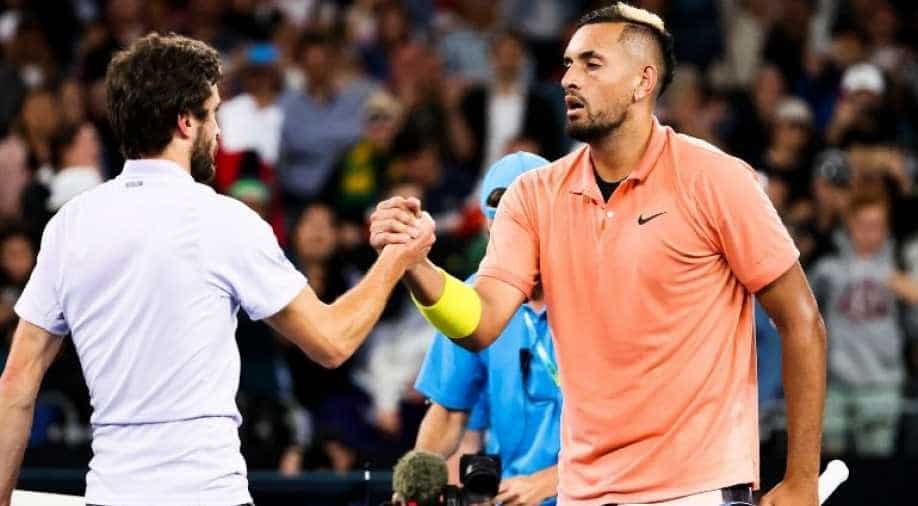 Australia's Nick Kyrgios (R) shakes hands with France's Gilles Simon at the end of their men's singles match on day four of the Australian Open tennis tournament in Melbourne on January 23, 2020. Photograph:(AFP)
Follow Us

Kyrgios has spoken of how the bushfire crisis in his homeland has given him perspective and focus, and that he felt he was playing for the nation rather than just himself.

Showman Nick Kyrgios admitted Thursday he was on the verge of going "to a very dark place", but he put his head down to pull off a confidence-boosting win over Frenchman Gilles Simon at the Australian Open.

The 24-year-old had the measure of the veteran early on then lost concentration and became agitated before refocusing to win 6-2, 6-4, 4-6, 7-5 on his favoured Melbourne Arena.

It set up a third-round clash with Russian 16th seed Karen Khachanov who beat Sweden's Mikael Ymer in five sets, with the winner on course to meet world number one Rafael Nadal in round four.

"I definitely lost my way a little bit... but I decided to refocus," Kyrgios said of his mini-meltdown in the third set. "I could have gone to a very dark place in the fourth set.

"I put my head down, I told myself, 'Just cut the bullshit and just get to work'. I got the break at 5-all. It was a good feeling to get through that."

And in a sign of a new-found maturity, he apologised to his player box after admonishing them when he was under pressure in the third set.

"I apologised as soon as I went back into the locker room. They don't deserve that," he said.

"The whole tennis world is behind it now... everyone deserves a bit of praise." @NickKyrgios leading from the front for the #Aces4BushfireRelief fund 👏

"They do a lot of things for me on and off the court. No, it's not acceptable from me. Nothing to do with them."

Kyrgios has spoken of how the bushfire crisis in his homeland has given him perspective and focus, and that he felt he was playing for the nation rather than just himself.

Nick reigns supreme 🙌@NickKyrgios holds firm against Gilles Simon, def. the Frenchman 6-2 6-4 4-6 7-5 and reaching the third round at the #AusOpen for the fourth time.#AO2020 pic.twitter.com/LsSeFKzPDf

And with the roars of the crowd ringing in his ears, he broke the Frenchman in the first game and consolidated by holding serve.

Kyrgios looked sharp and broke again for 5-2 then served out the set, sending down five aces and, crucially, making only two unforced errors.

Simon was struggling with his serve and the Australian broke again for a 1-0 lead in the second set, making some big shots when it counted.

It went with serve before Kyrgios, watched again by his ATP Cup captain Lleyton Hewitt, won the set with another rocket serve.

He broke Simon again early in the third set, letting out a huge "C'mon!"

But the Frenchman broke back as Kyrgios started to lose concentration in game eight, berating himself and gesturing to his box as frustrations kicked in.

He lost the set as his focus drifted and he yelled at his box: "Of all the things you could say, 'Stay tough'. Thanks, man, thanks. That's what I get, every breakpoint, 'Stay tough'. Wow."

But the Australian conquered his mental demons to regroup, getting a crucial break to go 6-5 up in the fourth and completing victory with a big ace, his 28th of the match.

"I feel good physically. That's probably the positive I take out of today," said Kyrgios.

"Long rallies, long match... I feel fine at the moment."