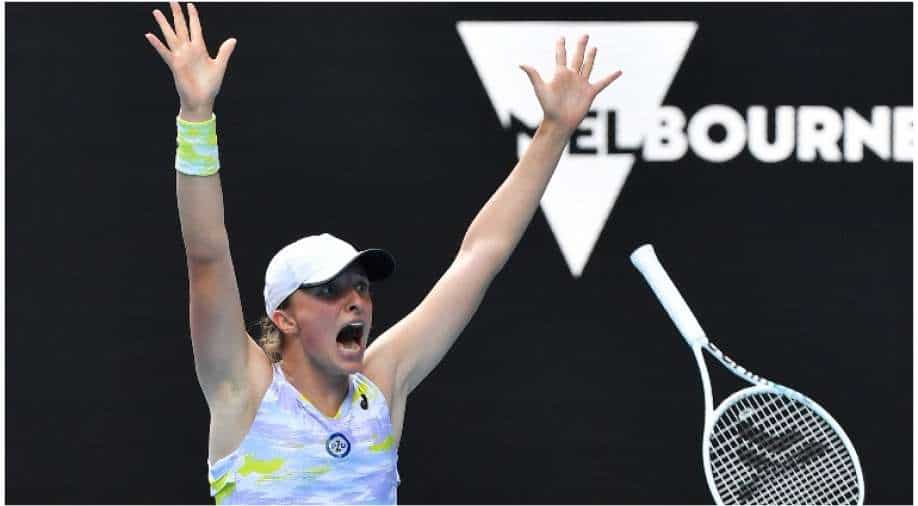 French Open winner Iga Swiatek managed to temper her frustrations and rally from a set and a break down in brutal heat to overpower Estonian Kaia Kanepi 4-6 7-6(2) 6-3 on Wednesday to reach her first Australian Open semi-final.

In their first career meeting, Swiatek wasted breakpoint chances in each of Kanepi`s first three service games and it was the Estonian who converted her first chance in the seventh game to nose ahead.

Swiatek saved four setpoints in the ninth game that lasted 16 minutes but could not stop Kanepi from taking the opener on her ninth opportunity after another lengthy game.

"In the first set I had so many breakpoints, I felt like I missed my chances because she broke me on her first breakpoint," Swiatek said on court.

"I was pretty annoyed. That was a mistake because I should have been focused on the future, on the next ball."

Kanepi, 36, appeared set to progress beyond the last eight at a Grand Slam for the first time when she broke early in the second, with a frustrated Swiatek slapping herself and slamming her racquet on court.

The Estonian did most of the damage with her powerful double-handed backhand, leaving Swiatek rooted to the spot and watching helplessly as the winners screamed past.

But the 2020 Roland Garros champion, who committed 12 double faults in the match, regained her composure and raised her level in a second set tiebreaker to level the contest at 1-1.

Swiatek suffered two more breaks in the decider but managed to break 115th-ranked Kanepi four times. She showed some incredible defence on her second match point, sealing the three-hour contest when Kanepi sent a backhand wide for her 62nd unforced error.

"I`m really glad that I have my voice because I was shouting so loud," Swiatek said.
"This match was crazy and without the energy in the stadium, I think it would`ve been really hard to win it."

While Kanepi admitted to feeling a "bit heavy" in her legs in the third set, Swiatek was unflustered in the sweltering conditions and said she would be ready for the last-four clash against Collins on Thursday.

"My main concern is if the sun is going to be bothering me during the serve," Swiatek told reporters. "So I didn`t really care that it`s hot and humid.

"I know that I`m physically really prepared, and I hoped that she`s going to be more tired in the end. I actually wanted to prolong some ... rallies to make her more tired because I have big trust in myself in terms of my physical shape."