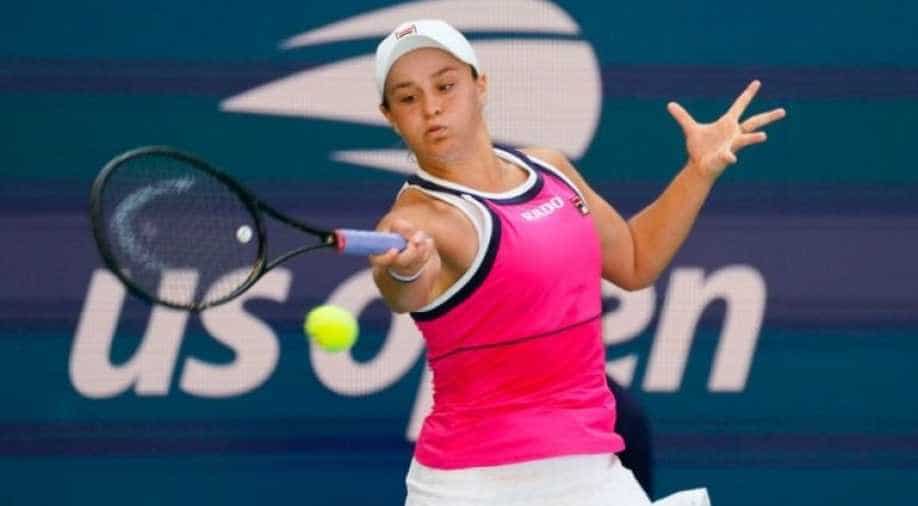 Ashleigh Barty of Australia hits to Zarina Diyas of Kazakhstan in the first round. Photograph:( Reuters )

Barty was able to stop the pain midway through the second set, converting on a crucial break-point opportunity to take a 5-3 lead and reverse the momentum in what had been a one-sided match

French Open champion Ashleigh Barty survived a first-round scare at the US Open on Monday, staving off Kazakhstan's Zarina Diyas 1-6, 6-3 6-2 after struggling to find her footing as the action kicked off at Arthur Ashe Stadium.

The 25-year-old Diyas took five straight games in the first set, as the world No.2 committed a string of unforced errors and got in just 25 per cent of her first serves.

Barty was able to stop the pain midway through the second set, converting on a crucial break-point opportunity to take a 5-3 lead and reverse the momentum in what had been a one-sided match.

"Not the ideal start, not the perfect start, but it is what it is. We were able to find a way after that to get into the match and be more patient and really just kind of lock down and wait until I got the right balls and right patterns that I wanted," Barty told reporters.

"Particularly in that first set, (Diyas) was able to put the ball in an awkward position for me, in a position where I couldn't attack."

The 23-year-old Australian, who reached the fourth round here last year, appeared to be back on form by the third set, getting in nearly two-thirds of her first serves and firing off 12 winners.

Barty skyrocketed to fame in June when she became the first Australian woman in 46 years to win the French Open singles title after downing Czech teenager Marketa Vondrousova in straight sets.

She followed up that performance with a win at the Birmingham Classic and also enjoyed a brief stint atop the WTA singles rankings.