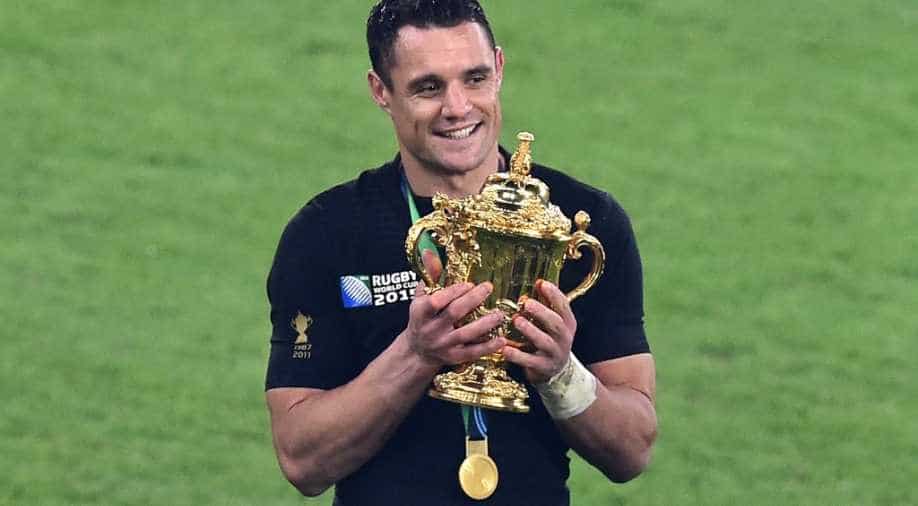 Two-time All Blacks World Cup winner Dan Carter announced a shock Super Rugby comeback with Auckland Blues on Thursday at the age of 38, saying he realised during coronavirus lockdown how much he missed the game.

Two-time All Blacks World Cup winner Dan Carter announced a shock Super Rugby comeback with Auckland Blues on Thursday at the age of 38, saying he realised during coronavirus lockdown how much he missed the game.

Carter, a three-time world player of the year, has been a free agent since returning to New Zealand in March from Japan, where a virus-enforced shutdown ended his lucrative stint with Kobe Steelers.

"Two things from the lockdown that I realised was that I really enjoyed spending more time with my family and that I miss rugby," Carter said.

"For me it is a chance to mentor some young players and to give back to New Zealand rugby," he added.

The signing comes as New Zealand's Super Rugby teams prepare to start a domestic tournament next week, after COVID-19 halted the southern hemisphere championship in March.

Carter has not played in his homeland since his international retirement in 2015, when he helped the All Blacks seal back-to-back World Cup titles at Twickenham.

As a replacement player, Carter will reportedly be on a minimum contract worth NZ$1,800 (US$1,155) a week, a huge cut from the millions he earned playing club rugby in France and Japan.

"It definitely not about money, he's not getting rich doing it," MacDonald said.

As the Blues already have Barrett -- himself a two-time world player of the year -- Carter may fill the role of supersub off the bench.

"I have not played for several months so it will take me a little bit of time to get game-ready," he said.

Former All Blacks coach Graham Henry had no doubt Carter still had the ability to play at the top level, despite his age.

All Blacks halfback and former teammate Aaron Smith tweeted: "The goat (greatest of all time) is back in Super rugby!"

MacDonald indicated Carter would be behind Barrett and rising star Otare Black in the pecking order.

"If he gets back into playing form that warrants selection, then he could help us as a utility back in midfield or fullback," he said.

He played for French club Racing 92 after retiring from Test rugby following the 2015 World Cup, before signing a two-year deal with Kobe Steelers in 2018.

The South Island native already has three Super Rugby titles from his 13-year stint with the Canterbury Crusaders and remains the competition's top points-scorer with 1,708.

Often described as the best fly-half to play the game, Carter revealed in his autobiography that he turned down an approach from the Blues in 2009 after his Crusaders-supporting grandmother Pam Carter opposed the move.

However, Nanna Carter said on Thursday that she had no problems with the latest deal and would support the Blues over the Crusaders when her grandson was playing for the Aucklanders.

"I don't care where he plays as long as he plays," she told stuff.co.nz.

"I miss him playing. I'm thrilled. I heard it on the news this morning and I thought 'Good on you Dan'."

The Blues claimed the last of their three Super Rugby titles in 2003 and have not made the playoffs since 2011.

Once regarded as a regional powerhouse, they have been the worst performing New Zealand Super Rugby team since 2014.