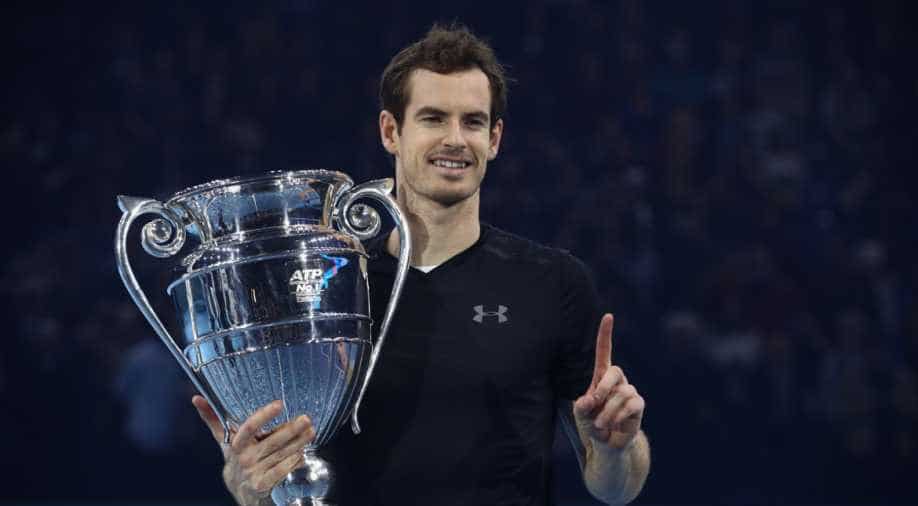 Murray is sitting on an unbeaten 24-match winning streak, after his victories in the Shanghai Masters, Paris Masters and the year-ending ATP World Tour Finals in London. Photograph:( Getty )

Roger Federer whipping a forehand down-the-line off Pete Sampras' famous serve during Wimbledon 2001 and sinking to the ground in jubilation will go down as a momentous occasion in tennis folklore for more reasons than one. Even though it took the Swiss a couple of years after that to consolidate his big arrival, the world knew only too well that the game's next grand daddy was here.

From 2004 to 2007, Federer showcased a type of dominance similar to the one achieved by the great Rod Laver in the 1960s. Notching up a staggering 11 Grand Slams through that period of four years, the genius from Basel was arguably the greatest active sportsperson at that time.

However, for all his success on grass and hard courts, Federer was never quite able to stamp his authority on clay. And the reason for that, of course, was tennis' next big thing Rafael Nadal. The Spaniard's victories in nine out of the ten French Opens from 2005 to 2014 is testament to his supremacy on the slow, dusty surface. The passing of the baton from Federer to Nadal, though, happened after the latter's victory in the 2008 Wimbledon final, probably the greatest match in tennis history.

From that year on, through to 2010, the Mallorcan won six Majors and an Olympic singles Gold medal, along with ending Federer's record four-and-a-half year reign at the top of the rankings.

A physically brutal game, leading to a damning knee injury, spelt doom for Nadal's stay at the top of the rankings. And that paved the way for Novak Djokovic to take centre-stage. The Serbian had already made a mark by winning the Australian Open in 2008, but 2011 was the year when he truly came into his own. Winning all the Grand Slams, apart from the French Open, Djokovic stitched together an astonishing 41-match winning streak at the beginning of the season.

In the years to come, the Serb raced to the top of the rankings, stocking up a tally of 12 Majors, and opened up a sizable gap between him and the rest of the field. What he also did was establish himself as the single dominant force in the, now prevalent, 'Big Four' of the men's game.

This was possible partly because of the fact that, up until then, the fourth wheel of this club hadn't really done much to stake his claim at the top in the first place.

Andy Murray, who was born a week before Djokovic, came on to the stage with the hopes of an entire nation riding on his shoulders. Great Britain hadn't seen a Grand Slam champion since Fred Perry in 1936, but had seen enough potential in Murray to pin all their hopes on him. But their expectations weren't matched until Murray's 100th career Grand Slam match, when he finally broke through the shackles and laid his hands on the US Open trophy in 2012. The Scot backed that up with a memorable Wimbledon triumph in 2013, followed by an Olympic Gold medal on the same hallowed grass the next month.

However, those victories proved to be a flash in the pan as Murray failed to win a single Major for the next three years. Having turned pro in 2005, he spent the better part of his career living in the shadows of Federer, Nadal and Djokovic. No one ever doubted his abilities, but the results never matched up to the talent. Was it the simple case of Murray's peers being better than him, or was his infamous temperament getting the better of him?

The year 2016, though, has finally given real hope to his supporters. After bulldozing through the first half of the season, Djokovic's form took a sudden turn for the worst during Wimbledon where he was blasted off the court by American Sam Querry, paving the way for Murray to claim his second All England title. The Brit carried that form through to Rio, where he became the first tennis player, male of female, to win a second Olympic singles Gold medal. As of today, Murray is sitting on an unbeaten 24-match winning streak, after his victories in the Shanghai Masters, Paris Masters and the year-ending ATP World Tour Finals in London.

Murray's domination of Djokovic in Sunday's ATP Finals is hugely significant. The two right-handers, having grown up playing together in the junior circuit, share one of modern tennis' biggest rivalries, albeit, one-sided. The duo have contested 35 times in their careers and the Serbian leads the head-to-head by 24-11. Be it the ATP 1000 Masters or the Grand Slams, Djokovic has largely had the measure of Murray. Sunday's lop-sided result, thus, could be an important mental victory for the Scot and a sign of things to come.

If one glances through the annals, one will find that most great players, including, Federer, have sustained sudden, inexplicable falls from sovereignty. Just when you start believing that they're untouchable, something snaps. Is it Djokovic's turn now?

"If you had told me six months ago that this would even be an issue, I would have said you're crazy," American legend John McEnroe said of Djokovic's sudden vulnerability to BBC.

With Federer making a comeback in 2017 after sitting out the second half of this season with an injury, Nadal struggling to find lost form since returning from injury, young guns like Milos Raonic and Dominic Thiem not quite arriving yet, and Djokovic's career entering an uncharted territory, now is the time for Murray's era to finally arrive.

(This articlle first appeared on DNA)