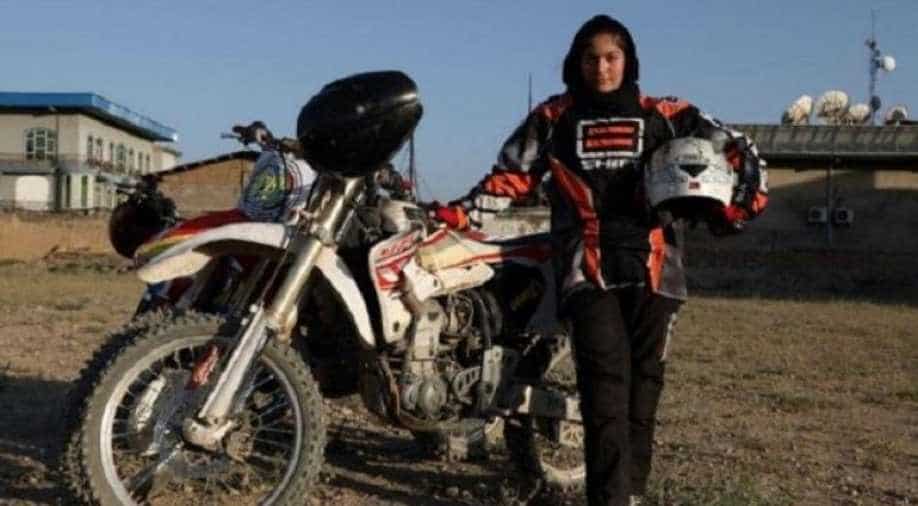 Encouraged by her parents, Afshar took up motocross about a year ago after having competed for Afghanistan in athletics when she was younger.

For 16-year-old Negin Afshar, riding a motorbike around a dirt track in Kabul isn't just about the excitement. It is also a way to show that Afghan women can be tough too in a country where concerns are growing that hard-earned rights might be lost.

Encouraged by her parents, Afshar took up motocross about a year ago after having competed for Afghanistan in athletics when she was younger.

Wearing a white helmet and black and red motorbike suit, she trains with male riders on a barren lot surrounded by warehouses and private homes.

"When I saw the men motorcycling here, I decided to pursue motocross to inspire Afghan women and show that they can do this tough sport as well," Afshar said during a break from practice.

"I tried to be one of the first women to take this path, and I hope we can encourage others as well."

She and her mother worry that pursuing her passion may not be so easy in future, with the hardline Islamist Taliban movement bidding for a share of power in a country where it has led a ruthless insurgency since 2001.

When the group ruled Afghanistan in the late 1990s, girls were not allowed to attend school, women could not work and they had to wear all-enveloping burqas when they left their homes.

In recent months the Taliban has projected itself as more moderate, as it seeks to turn battlefield gains into formal recognition. Talks with a government-mandated committee remain stalled amid violence and mutual suspicion.

Asked whether she was concerned about the rights of girls and women being eroded should the Taliban return to power, Afshar replied:

"God willing, this will not happen, because our government will not allow the Taliban to do so ... If they want to violate our rights, we will stand against them and resist. I will not leave my country, and I want to stay here and serve my country."

Her mother, Frishta Afshar, head of the women's committee of the National Motorcycling Federation of Afghanistan, agreed.

"Some people do not agree with this, and they have a negative view, while others agree and encourage," she said. "In any case, my husband and I will support her as much as we can, and we want to take Negin to the highest peaks of success."

For the time being, such dreams are on hold.

Sayed Nabiullah Sadat, the motorcycling federation's president, said the motocross team had been invited to competitions in Iran and Malaysia, but the coronavirus pandemic had disrupted those plans.