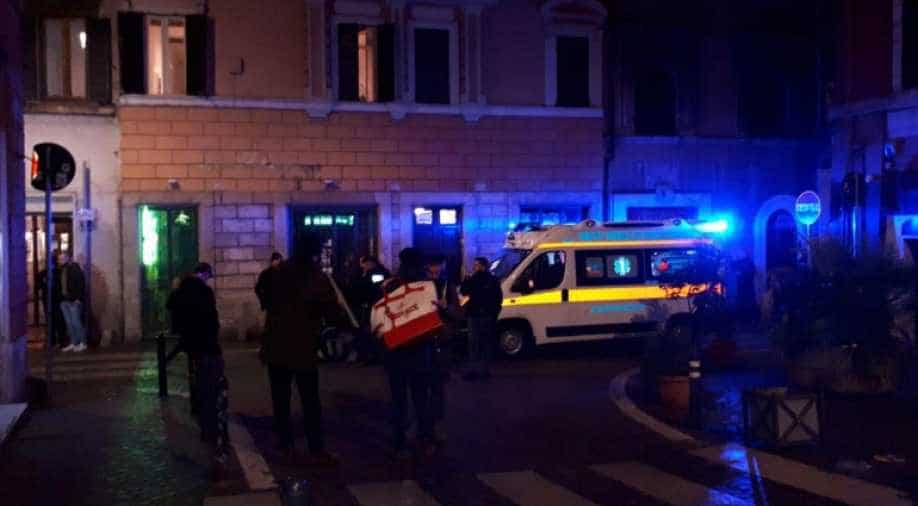 Italian police and medical personnel attend to people at the scene of a brawl. Photograph:( Agencia EFE )

The violence erupted around 9:30 pm on Leonina Street, near the Coliseum, where four people - the two Spaniards, plus an American and a Briton - were shot and seriously injured.

Four people, two of the Spaniards, were injured on Wednesday in a brawl between fans of Lazio and Sevilla in downtown Rome, where the two squads will face off on Thursday in the first of two round-of-32 UEFA Europa League playoff matches, local media reported.

The violence erupted around 9:30 pm on Leonina Street, near the Coliseum, where four people - the two Spaniards, plus an American and a Briton - were shot and seriously injured, according to local sources.

The wounded were quickly taken to Spirito Santo Hospital, where one of them is said to be in particularly bad shape.

The fight involved more than 40 people and some of them took refuge in nearby bars and restaurants when the gunfire broke out.

Police are on the scene and are investigating the incident, interviewing witnesses and looking for the shooter or shooters.

According to initial reports, a group of Lazio fans wearing masks and armed with truncheons and knives attacked some young people and Sevilla fans who were on Leonina Street, wounding some of them in the legs.

More than 2,000 Sevilla fans traveled to the Italian capital to attend the match scheduled to begin at 6:55 pm Thursday at Olimpico Stadium.

The Spanish fans will have to gather on Thursday on Piazzale delle Canestre, from where public bus service will be provided to Olimpico Stadium at 4 pm, according to security announcements published by Italian police.

"Remember that in the central areas on Piazzale delle Canestre and in the streets adjacent to the Olimpico Stadium the sale of bottled beverages is prohibited, as is the transport of beverages in glass containers," the Sevilla football squad said recently in a communique.

"In addition, traveling to the stadium by other means is prohibited as is the use of pyrotechnical items. Those who violate any of these rules will be subject to police measures. In addition, any problem must be communicated to the proper authorities by calling the toll-free emergency number 112. The only (stadium entrance) reserved for visiting fans is the 'DISTINTI SUD' - 'SETTORE SUD MONTE MARIO,'" the Sevilla statement added.