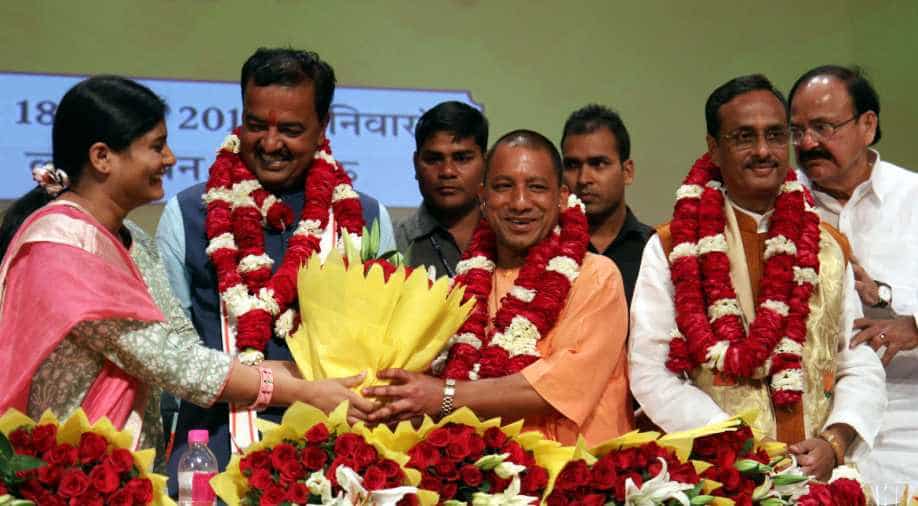 Officials did not say what sort of slaughter houses would be shut. Adityanath has also ordered a blanket ban on the smuggling of cows. Photograph:( AFP )

Yogi Adityanath, a firebrand lawmaker from Gorakhpur, took today oath as the 32nd chief minister of India's most populous state of Uttar Pradesh in the state capital Lucknow.

In his first interaction with media persons after taking over, Adityanath said his government will follow the 'sabka saath sabka vikas' (With all, development for all) agenda in serving the people.

The Uttar Pradesh chief minister said his government would work for all sections of the society without any discrimination.

He also said the government would work towards bettering the law and order situation and tackle the unemployment problem.

"The people have borne a heavy loss due to the deteriorated situation of law and order and corruption. Our Government will work for the welfare of the people," he said. "We will surely work to improve job crisis".

He said that in the last 15 years, Uttar Pradesh had been left behind in all respects, and vowed to take the state on the path of growth and development.

The Muslim face of the Cabinet, former cricketer Mohsin Raza, was sworn in as the Minister of State.

Yogi Adityanath was chosen as the next chief minister of Uttar Pradesh on Saturday ending days of speculation.

Samajwadi Party patriarch Mulayam Singh Yadav was also invited for the ceremony and could be seen interacting with PM Modi.

The decision was made after a high-power meeting at Lok Bhawan in Lucknow. The meeting was attended by Union minister Venkaiah Naidu and BJP vice-president Om Mathur.

Adityanath is known to be a Hindu hardliner, with his incendiary comments often creating controversies.

The five-time MP has compared Pakistan to Satan and Bollywood actor Shah Rukh Khan to Hafiz Saeed, the alleged mastermind of the 26/11 Mumbai attacks.

In 2002, he formed a right-wing outfit named Hindu Yuva Vahini. The group has been known for enforcing cow protection and love jihad (inter-religious marriages) campaigns.

The 44-year-old has also been accused of converting Christians to Hinduism in 2005.

Most recently, he lauded US President Trump's travel ban that aimed to halt immigrants from a handful of Muslim-majority countries from entering America, saying India needed similar action to check terrorism.

Deputy CM Keshav Prasad Maurya was instrumental in the BJP securing over 300 seats in these elections as he helped the saffron party get the non-Yadav OBC votes. And like Modi, he worked at several tea stalls when he was a young boy.

Maurya's colleague Dinesh Sharma, the national vice-president of the BJP, is believed to be close to Modi. Sharma, also the mayor of Lucknow, played a key role in boosting the party's membership from 10 million to 110 million before this year's elections.

Adityanath's appointment removed the shroud of uncertainty about the identity of the state's next chief minister.

Besides Adityanath, Union minister Manoj Sinha, BJP leader Shrikant Sharma and Maurya were in the reckoning to be the head of India's northern state.

Till a few hours ago, it was Manoj Sinha who was believed to be in the inside lane of the chief ministerial race. But minutes before the Lok Bhawan meeting at 4 pm yesterday (March 18), there were strong indications that Adityanath had stolen a march over Sinha.

"The mandate is for development, good governance and against caste politics."

The BJP swept to power in UP, winning 312 seats in a 403-member house, while its allies Apna Dal (Soneylal) and Suheldev Bhartiya Samaj Party got nine and four seats respectively.