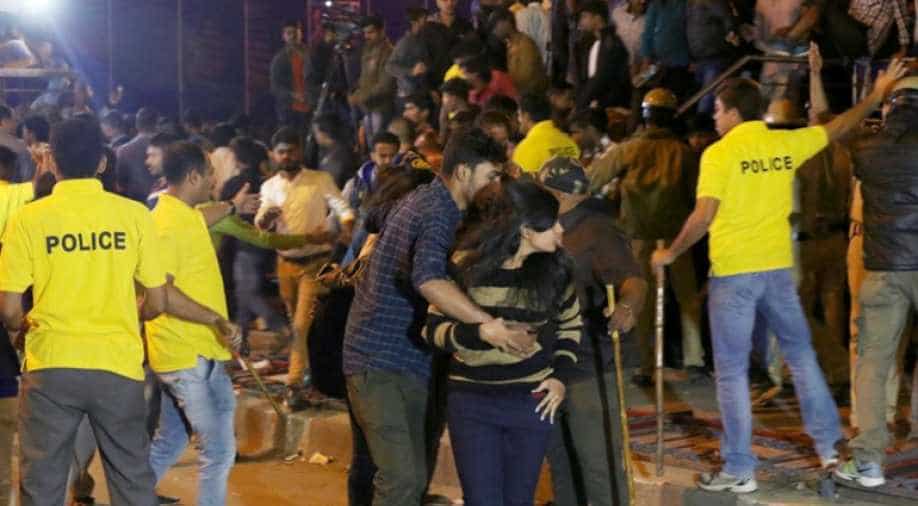 The men mobbed, groped and made lewd remarks to the women in the city's bustling areas of MG Road and Brigade road in the wee hours of  Sunday. The incident was captured by CCTV cameras installed in the area.

"There was need to look into how such events can be organised and regulated. We cannot have 10,000 police men," he said. "Unfortunately, what is happening is as I said days like new year Brigade Road, Commercial Street, M G Road, large number of youngsters gather. Youngsters who are almost like Westerners, they try to copy the Westerners not only in the mindset, but even the dressing."

"Such incidents do happen on New Year's day and on Christmas. We take a lot of precautions," he told news agency ANI, adding, that the government had installed more than 25 CCTVs.

The minister's remarks drew an angry response from the National Commission for Women (NCW) chairperson, Lalitha Kumaramangalam, who demanded the home minister should resign and apologise to the women of the country for making such remarks.

"Such remarks from the Home Minister is unacceptable and regrettable. I want to ask this minister are Indian men so pathetic and weak that when they see a woman in Western clothes on a day of revelry, they get out of control? When will the Indian men learn to respect women? The minister should apologise to the women of the country and resign," Kumaramangalam said.

Reacting to the police's claims that there are no official complaints of molestation, the NCW chief said pictorial information is enough for them to take action.

"There is enough proof in terms of pictorial information. They can take action regardless of whether an FIR was lodged. If there were 1,500 policemen and still they could not prevent such incidents, well then it's a very sorry state of affairs and police do not deserve to be the police if they can't protect women," she said.

Kumaramangalam said that the commission has taken suo motu cognisance of the incident and has written to the director general of police (DGP), the city police commissioner and home minister seeking a reply on what action has been taken immediately.

"This type of indisciplined behaviour, on the part of such elements, is not desirable, certainly we will take actions. We will identify some of the main culprits and we will take action," said Director General of Karnataka police, Om Prakash.

City police officially claimed that they did not receive any distress calls and did not register a single case of molestation or harassment, Bangalore Mirror reported.

Nagendra Kumar, deputy commissioner of police, Command Centre, Bengaluru, told Bangalore Mirror that even the city control room did not receive any such distress calls and most of the calls received during New Year celebrations on Saturday night were either regular enquiry calls or for traffic assistance.

“We got around 450 calls at the city control room when on Saturday night, especially after 10 pm till wee hours in the morning, and not even one was about women being assaulted or molested,” he said.

Sandeep Patil former deputy commissioner (central) of the city, under whose limits Brigade Road and MG Road fall, concurred, saying, " no case of molestation has been registered so far."

He told Bangalore Mirror that a number of women did approach the police seeking help as they got separated from their family members and friends.

“So we used our public address systems to locate and our men ensured they faced no hardship. No case of molestation has been registered so far,” he added.

A retired senior police officer told the daily that city New Year revellers were always unruly mob and the police should have deployed adequate security.

“It has been the case since the 70s. Handling the New Year crowd in Bengaluru is very difficult, but that means the police department should have a clear plan and be well-prepared to ensure there are no major incidents,” said Ajai Kumar Singh, retired director-general of police.

Women's rights activist, Ranjana Kumari, demanded action against the cops on duty at the time of the incident for failing to protect the women.

"I demand that all the policemen who were there should be suspended. Senior police officers should take action. Investigation should be done and also footage, which is available, on the basis of that those people should be immediately arrested and booked," said Kumari in New Delhi.

Nearly four out of five women in India have faced public harassment ranging from staring, insults and wolf-whistling to being followed, groped or even raped, Reuters reported, citing a survey by the charity ActionAid UK in May 2016.