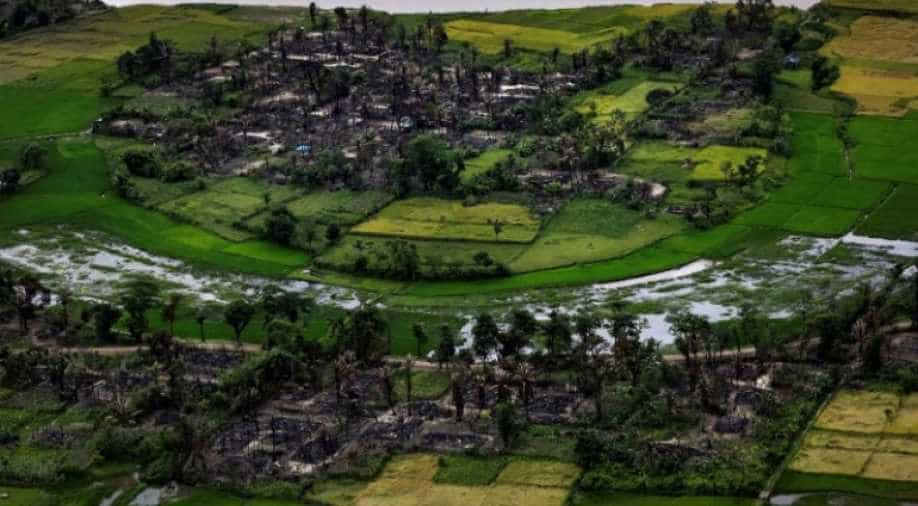 File photo of the remains of a burned Rohingya village is seen in this aerial photograph near Maungdaw, north of Rakhine State. Photograph:( Reuters )

About 730,000 Rohingya have fled Rakhine state, in western Myanmar, since a military crackdown in 2017 after Rohingya insurgents attacked security posts, UN agencies estimate.

The head of the UN children’s fund urged Myanmar on Monday to implement the recommendations of a panel on the Rohingya crisis led by former UN head Kofi Annan, saying it had yet to create conditions right for the return of refugees from Bangladesh.

Speaking at a forum in the capital, Naypyitaw, UNICEF executive director Henrietta Fore said children from the Rohingya Muslim minority, a persecuted and mostly stateless community from Buddhist-majority Myanmar were living “a precarious and an almost hopeless existence” in camps in neighbouring Bangladesh.

About 730,000 Rohingya have fled Rakhine state, in western Myanmar, since a military crackdown in 2017 after Rohingya insurgents attacked security posts, UN agencies estimate. Tens of thousands remain behind in Rakhine, where they are subjected to restrictions on movement and have limited access to healthcare and education.

Fore said Myanmar’s “commitment” to enacting the recommendations of Annan’s committee – which include ensuring freedom of movement and access to education – would help mend the lives of suffering children.

“We urge the government to seize this moment and translate this potential into reality for all children,” she said on the first visit by a UNICEF head in decades. “Taking these steps will also go a long way towards creating the right conditions for the return of refugees from Bangladesh.”

The Annan commission was created by Myanmar leader Aung San Suu Kyi in 2016 to find long-term solutions to deep-seated ethnic and religious divisions in Rakhine.

But implementation of its recommendations has been beset by crises and setbacks.

A day after the panel issued its report in August 2017, Rohingya insurgents launched attacks on security forces, provoking a military crackdown the UN investigators described as "ethnic cleansing" with "genocidal intent". Myanmar denies the charge.

In mid-2018, a Myanmar minister told Western diplomats that eight of Annan's recommendations — including one that asks authorities to take steps to amend the 1982 citizenship law that had rendered the Rohingya stateless — were problematic and could not be immediately fulfilled.

The commission's recommendations included points urging the government to "immediately expand primary education to the communities in northern Rakhine State, and intensify efforts to ensure that teachers assigned to Muslim villages resume their work, including by providing adequate security when necessary".

It also called on authorities to "ensure that all children in the state have access to education in Myanmar language" and that the tertiary education access is expanded.

In August, UNICEF warned of what it described as a "lost generation" of Rohingya children, with half a million in refugee camps in Bangladesh facing dangers including disease and floods and those still in Myanmar lacking access to proper education.

“We urge that the necessary steps are taken to enable their safe, voluntary and dignified return back to their homes where their rights are respected and they can once again live peaceably with their neighbours,” said Fore.