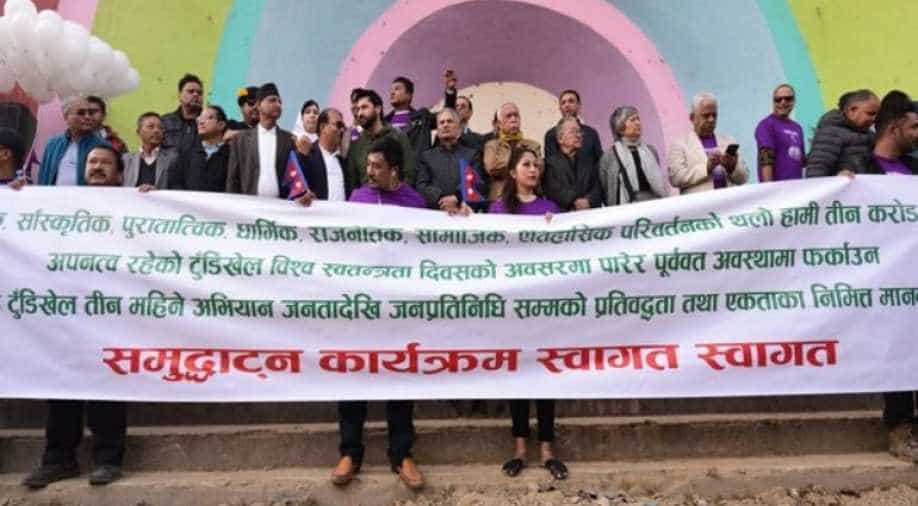 Activists and people who formed the human chain to preserve Tundikhel

Social movement "Occupy Tundikhel" has been launched in Nepal to protect one of the largest parade squares of South Asia.

The movement was announced in Kathmandu on Saturday morning and a human chain was formed around the open space of Tundikhel to draw attention to the issue and raise awareness amongst people.

Activists and people who formed the human chain to preserve Tundikhel, one of the last surviving open spaces in the heart of Kathmandu, carried placards and banners asking the government to preserve the open area which is now shrinking.

In an ANI exclusive, environment activist, Rupa Joshi said, "Seeing Kathmandu Valley shrink-shrink-and-shrink with concrete and less and less open space, and with my children- now, I have four grandchildren I look at their future; I am in my 60s and how many years do I have? But when I look at the younger ones and what are we leaving for them? Where are the open spaces?"

"There is so much greed for space that people are just grabbing land whether it belongs to a school or any other open space to build a mall or for any other purpose. How many malls do we need, how many shops do we need? How is that important for the children and young people?" she added.

Tundikhel, which also covers the Army Pavilion, dates back to at least the early 18th Century during the Malla period. It then served as a military parade ground, horse race track, spot for religious festivals, as well as a public park and grazing ground.

But over the years, it has shrunk in size and is still being encroached. It was used to dump rubble from the 2015 earthquake and even today debris from government construction activities that are underway is deposited here.

In the aftermath of the 2015 earthquake, thousands of people took shelter in the open space of the square for a long time.

Analysts claim that the movement is a step to preserve history, as it was once the largest parade ground of South Asia.

"After the earthquake of 2015, the youths of Kathmandu witnessed the loss of heritage sites. Then understanding about the preservation of their heritage developed amongst them. It led them to start the campaign to preserve temples and other cultural aspects," said Sudeep Shrestha, a journalist from the Kathmandu Valley.