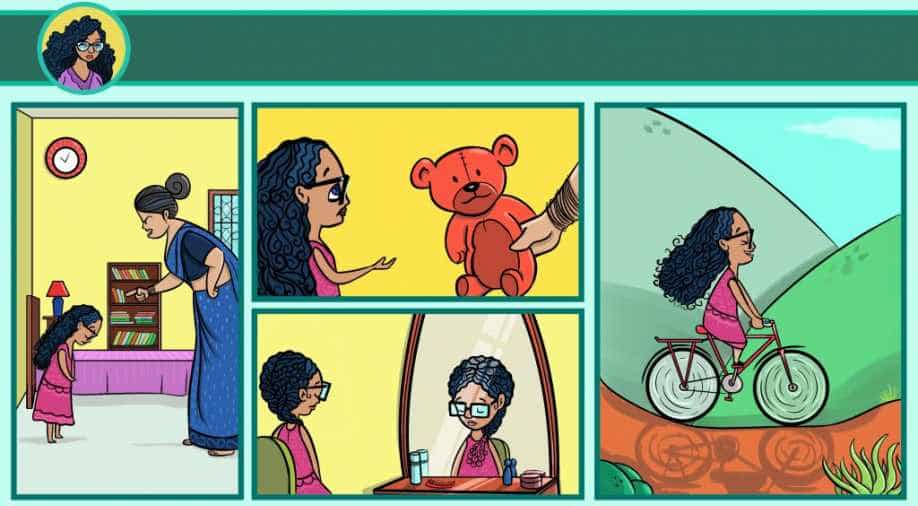 Dhee is not like the fun-and-frolic safe comic characters Photograph:( WION )

Comic books speak directly to our imagination and no matter our age, where we live or where we are from, they have the uncanny ability to cross cultural barriers, break boundaries and challenge taboos. They touch the child in us and feed our fantasies. Dhee, Bangladesh's first lesbian comic book character, manages to do precisely that -- and in a conservative, Muslim-majority country.

She is the protagonist of a comic strip launched last September by Boys of Bangladesh (BoB), a non-governmental organisation that supports lesbian, gay, bisexual and transgender (LGBT) rights. Dhee is a young Bangladeshi woman in her twenties who discovers she is attracted to other women. She is not a superhero. She does not have super powers. Nor does she have super weapons. She is just the (Muslim) girl next door, living with her family in the suburbs.

Curly-haired, bespectacled, average-looking, Bengali-speaking and dressed in traditional clothes, Dhee could be any of the young women out on the streets of Dhaka.

Dhee has a momentous challenge though: understanding her desires, accepting her sexuality and finding a way to tell a conservative society that she is lesbian. Her message is simple: there is nothing wrong with her. Nothing perverse or dangerous. She just loves other women and she wants to be free to do so.

A strip from Dhee.

The appearance of a lesbian comic character, the first of its kind in Bangladesh, received huge attention from the international media. Her story develops through ten simple strips with clear and colourful lines in cartoon style. She uses the language of kids to reach adults.

“We tried to keep everything as simple as possible, in order to make it understandable to everyone,” says Rajeeb, a BoB activist who did not want his full name revealed due to security concerns. “We wanted people to relate to homosexuality in Bangladesh. I would not define our society as entirely conservative. You know it depends. It is extremely conservative when it comes to the private sphere of life, particularly when you talk about sex and sexuality,” he adds. And this is exactly what Dhee needs to overcome.

Dhee asks herself what could she do .

The picture above deserves a translation. The headline reads: "Standing at this point of life I could not understand which turn my future will take. Can you tell me what should I do?"

From the top left image, moving clockwise, Dhee thinks about the options she has: "Marrying a guy after giving up my real identity? Going abroad with the hope of a new life? Committing suicide with all the pain and silence in my heart?"

And, fortunately, she finds a good answer: "I should accept myself and work for people who cannot speak freely about their identity."

Sometimes, the children in us create a lot of noise and they get wrong people to listen to. Dhee caused such a ruckus, she attracted the attention of some Bangladeshi newspapers which incited violence. Banglagazette.com called for prompt government intervention and stated, “Bangladesh has taken yet another step towards aping the West”.

The hardline Islamist political party, Khilafat Andolan, told dailysanghram.com that “homosexuals are enemies of civilisation and enemies of Islam.”

But comic writers are a defiant species. “I think that some of our scholars need to catch up with the times. Nowadays there are eminent views proposing a more tolerant and inclusive interpretation of Islam. Moreover, this conservative and strict version of Islam is actually imported. Islam does not openly condemn homosexuality,” says Rajeeb.

Comic books may be fun to glance across but often convey powerful messages. This is exactly what makes Dhee such a strong instrument of communication and a disruptor for many. Comic book characters live in a kind of no man’s land halfway between drawings and books, between seriousness and joke, between the worlds of kids and adults. Often considered too childish to be a real menace, they enjoy a fairly free space and are able to speak their mind with fearlessness. No surprise that they have been historically used both for satire and propaganda.

A few years back, the people’s love for comic books brought the first Comic Con to Bangladesh. Comic Con is the international festival for fans and producers of comic books. Ever since, it has been an annual affair.

Yousuf Abu Syed, one of the founders of the Dhaka Comic Con, is an excited man. He says, “We thought that a maximum of 500 people would come and we were astonished when thousands of participants, some of them even dressed as popular superheroes, turned up. We keep doing it every year and it is growing bigger.”

Bangladesh has its own indigenous comic book characters. “Comic Con came into being when the comic books industry in Bangladesh was going through a tough time. But now, we do have quality Bangladeshi comics for an affordable price, often for less than two US dollars. But this is a new thing, many of us have obviously grown up following the usual superheroes. When I was a kid, Bengali comics came only in black and white,” quips Syed.

At the Comic Con fans come in droves, often dressed as their favourite comic book character, they lollygag and meet other superheroes, take some selfies and, then, get back to reality. Comic Con becomes a meeting point for comic book fans and the industry. Publishers and young illustrators showcase their works. Stalls do brisk business.

“For me, it’s like reliving my childhood,” says a euphoric young woman dressed as Pikachu, one of the stars of the Pok?mon cartoon series. Most participants are in their twenties and many of them are students.

But Dhee is actually a breed apart from the fun-and-frolic safe comic characters who crowd the Comic Con. Her presence disturbs that pop and emotionally safe atmosphere. And Dhee’s creators, Boys of Bangladesh (BoB), are only too aware of this. But they want to press on.

“We are definitely keen to move forward with our project but it’s not easy. We are travelling around the country to promote these comic strips and the messages they carry but we are totally unfunded and that is a major issue”

One wonders what would happen if Dhee had the chance to walk around the stalls of Comic Con, exactly as other characters, meeting people and telling them her story. After all, they live in the same artistic world and speak the same language. But they just haven’t met yet.