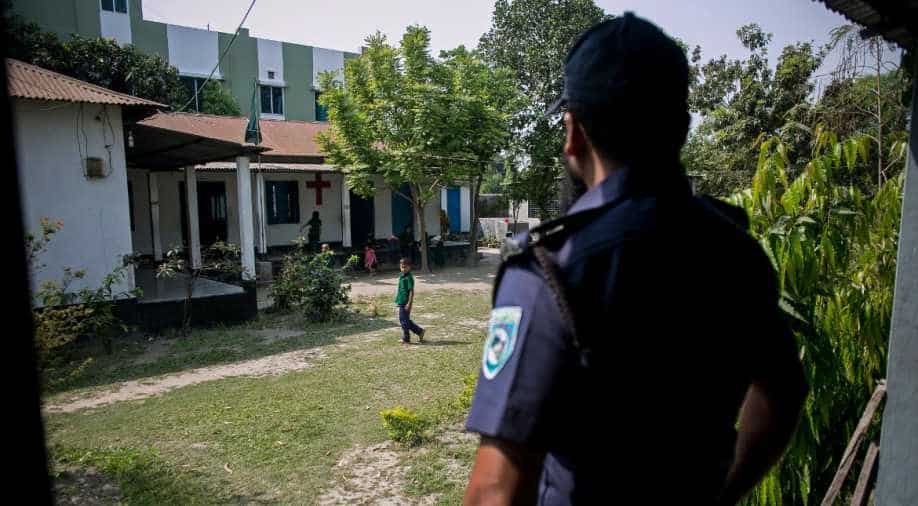 Follow Us
A teenage suspected Islamist militant being held in custody in Bangladesh was shot dead on Saturday in a gunfight, police said, days after he allegedly hacked and critically wounded a Hindu lecturer.

Golam Faizullah Fahim, 19, who was in custody for questioning, was killed when officers came under attack in a farmland area after taking him to a river in search of his Islamist associates.

"Miscreants fired at the police van as we came near a jute farm. A gunfight ensued. After the gunfight we saw Fahim was shot and wounded. He died after we brought him to a hospital," Sarwar Hossain, police chief of Madaripur where the shooting took place, told AFP.

Locals in Madaripur caught Fahim on Wednesday after he and two other suspected Islamists attacked and wounded 50-year-old mathematics lecturer Ripon Chakrabarti, a Hindu, police said.

The attack was the latest in a wave of brutal assaults on secular activists, writers and religious minorities by suspected Islamist militants.

Police later told reporters Fahim was a college student and was a member of banned Islamist group Hizb ut-Tahrir.

Hizb ut-Tahrir (Party of Liberation) is an international group which wants to combine all Muslim countries in a unitary Islamic state. The group is outlawed in several countries, including Bangladesh.

Six suspected Islamist militants have now been shot dead since Bangladesh launched a nationwide crackdown on local jihadist groups in the wake of a spike in murders of secular activists and religious minorities.

The drive has seen more than 11,000 people including 194 militants arrested over the past week despite widespread criticism by local and international human rights groups.

Rights activists also questioned the incidents of deaths in police custody, saying the militants were shot dead in "cold blood" in encounters staged by officers.

Nearly 50 people have been killed over the last three years in a wave of gruesome murders targeting Hindus, Christians, Sufi Muslims, secular activists and foreigners, with most blamed on or claimed by Islamist militants.

Many of the victims were hacked to death with machetes.

This month alone, an elderly Hindu priest was found nearly decapitated in a rice field and a Hindu monastery worker was hacked to death, while a Christian grocer was found murdered near a church.

The Islamic State group has claimed responsibility for the Hindu priest's murder and other recent attacks.

But authorities instead blame homegrown militant groups and say international groups IS and Al-Qaeda have no presence in Bangladesh.