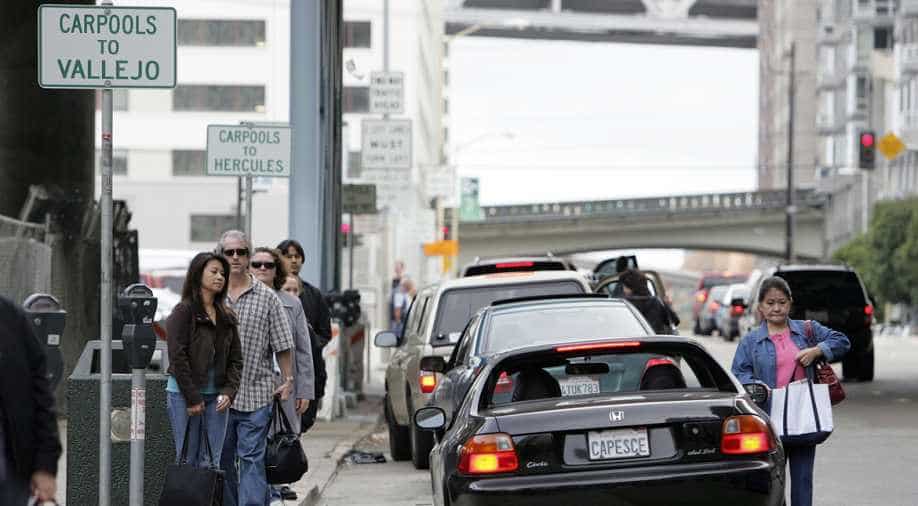 One of the solutions to combat air pollution is carpooling, let's share our rides. Photograph:( Getty )

These words provide us with a poignant reminder about what needs to be done to save our planet. Fast-paced consumerism and insatiable materialism have come to define our species and in the process set our planet on the path to destruction. Our rapacious greed has put a question mark on the future of the only known planet in the universe that can sustain life.

The time could not be more ripe to launch aggressive self-correction measures. Unfortunately, our leaders are still in a game of establishing onus on the basis of traditional responsibility, rather than coming together to take strong and decisive measures aimed at reducing carbon emissions. While the political economy of climate change goals has led to some sort of a stalemate in the international arena, there are solutions which can be adopted by cities to rein in rising air pollution levels without much dependence from political leaders. These solutions can be implemented by business models that inherently support environmental goals.

For example, one of the biggest sources of pollution is automobiles. While moving to cleaner and more efficient fuel-operated vehicles is the most ideal option for curtailing city pollution levels, in emerging economies considerable time is needed before complementary infrastructure can be created to support this move. Thus, there is a dire need to think of short-term solutions that can address the challenge of rising car ownership and pollution levels in the city.

Recently, the role of transporting people from point A to point B in a city has been assumed by technology aggregators. A complex innovation displayed in the simplest form is solving the inefficiencies that have haunted the urban transportation sector for centuries. But do these players solve other challenges through their technology? In particular, aren’t the aggregators simply adding more cars on the road and adding to traffic snarls and city pollution levels? The answer is no!

The sophistication of technology has allowed them to build products that marry innovation with traditional concepts aimed at reducing congestion and pollution. One such product is “carpooling” or “ridesharing” as these aggregators are calling it today. Simply put, the idea is aimed at efficient utilisation of existing assets while directly impacting a city’s space availability and carbon emissions generated by vehicles. The concept is old but the advancement in technology has navigated the challenges the idea encountered in a non-digital space such as optimising conflicting schedules, making sharing a ride comfortable, et cetera. However, amid all the talk about decongestion of cities and cheaper transport options that have been generated by these options, a quiet revolution has the potential of making significant value additions to our climate change goals.

Ridesharing promotes more people in fewer cars and results in the reduction of emissions, because the number of kilometres driven across a city and fuel burned are reduced significantly. Further, as more people embrace this means of transportation, a wonderful and complementary relationship is created between public transport and these services, which disincentivises car ownership substantially. At a time when cities like Delhi have a vehicular density of 80 vehicles per kilometre and 27 lakh personal vehicles with 1,463 new vehicles added to the city every day, one is compelled to think of scenarios which can reverse this trend.

A “stick” approach would entail levy of congestion charges and other related taxes, but a more innovative solution comes in the form of people using their existing personal vehicles to offer rides to other people travelling to the same destination or nearby. The experiment has already generated positive impact from both a decongestion and environmental perspective.

For example, Uber’s study of ridesharing in LA revealed that in eight months it managed to reduce 1,400 metric tonnes of CO2 emissions. In San Francisco, the monthly reduction totalled 120 metric tonnes. As this model is scaled, it will further benefit the environment not only because of reduced emissions but also because of the opening up of urban space which would otherwise be earmarked for public parking or extension of road lengths. The free space could be used for environmental goals, such as the creation of public parks.

It is estimated that every carpool helps remove four cars from the road, which is as good as planting 4,000 trees. Imagine the impact we can have on Delhi’s abysmal air pollution levels if we turned on the private ridesharing switch on each of its its 27 lakh personal vehicle.

This is essentially the way forward for ensuring sustainable development – building profitable business models led by technology-driven solutions that also benefit collective environmental goals. Such ideas require public and government support. An enabling regulatory landscape would help environmentally-conscious companies to scale their business and effect momentous transformation in the way we have traditionally operated.

To this end, while we continue to bicker over the Intended Nationally Determined Commitments (INDC) and Common but Differentiated Responsibilities (CBDR), there is a real opportunity for local government, citizenry and businesses to come together and bring about incremental changes to reduce emissions.