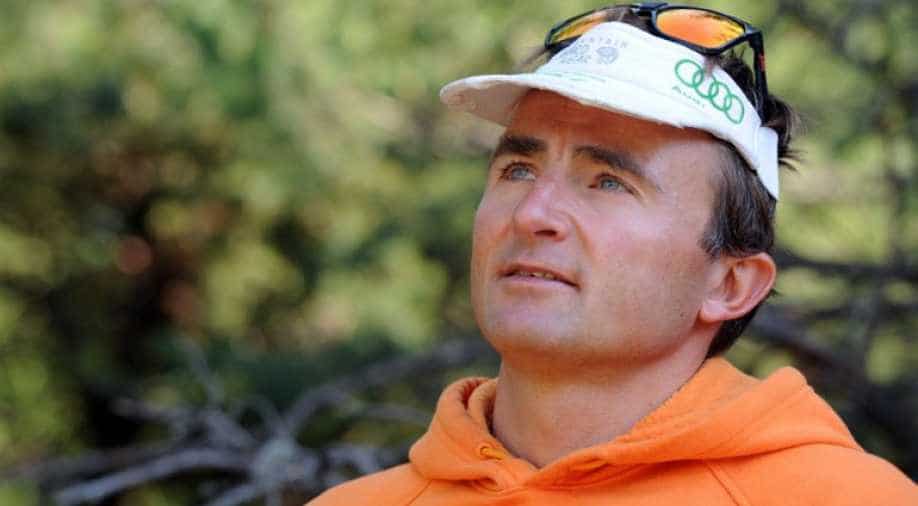 Swiss climber Ueli Steck was famed for his record speed ascents in the Alps, which earned him the nickname the "Swiss Machine". Photograph:( AFP )

The body of legendary Swiss climber Ueli Steck, who died on Mount Everest, was cremated on Thursday at a Buddhist monastery that lies in the shadow of the world's highest peak.

Steck -- one of the most feted mountaineers of his generation - became the first fatality of this year's spring season on Everest when he fell from a ridge during an acclimatisation climb on Sunday.

The climber's body was flown by helicopter on Thursday to the Tengboche Monastery that lies on the trail to the peaks that claimed his life.

Steck's wife Nicole and close family members arrived with the body from Kathmandu for the Buddhist funeral ceremony, according to an AFP photographer at the scene. They had flown to Nepal earlier this week.

Steck's body was carried from the helipad to the cremation site a few hundred metres from the monastery, which is surrounded by sheer Himalayan peaks including Everest's towering 8,848 metre (29,030 feet) summit.

The family surrounded the funeral pyre as it was lit, and monks in flowing maroon ropes offered prayers and played music.

A number of climbers were expected to trek down from Everest base camp -- some 20 kilometres (12 miles) from Tengboche -- to attend the cremation, according to Nimesh Karki of Seven Summits, a trekking company that helped Steck organise his Everest attempt. It was unclear if any had arrived in time for the ceremony.

Steck was famed for his record speed ascents in the Alps, which earned him the nickname the "Swiss Machine" - an epithet that he himself disliked.

"He lived with it, but Ueli was very modest," Billi Bierling, a climber and journalist who is currently translating Steck's latest book from German to English, told AFP.

"In a way he knew he was quite extraordinary, but on the other hand he thought that, 'If I can do it, everybody can'."

Steck was attempting to achieve another first this year by charting a rarely climbed route to summit both Everest and Lhotse, the world's fourth highest mountain, all without the use of supplemental oxygen.

Steck was due to summit Everest via the West Ridge -- a route that has recorded more fatalities than summits -- before climbing Lhotse.

The accomplished alpinist was on an acclimatization run to Mount Nuptse, which shares a common ridge with Everest, when he slipped and fell more than 1,000 metres (3,280 feet) early on Sunday morning.

During his more than two-decade long career, he scaled some of the world's most daunting peaks, often alone and without basic safety equipment such as fixed ropes or bottled oxygen.

Tributes to Steck have poured in from the climbing community since his death.

Most have lauded a career that saw him become one of the most prominent names in mountaineering, though he has also received some criticism in the Swiss press for a series of controversies that also stalked the climber.

Steck made global headlines in 2013 when he and two other Western climbers came to blows with a group of Nepali guides on Everest.

After the incident he swore he would never to return to Everest, but he was back in the Himalayas just months later to scale Mount Annapurna, the world's tenth highest, becoming the first mountaineer to complete a solo ascent of the 8,091 metre peak.

Controversially, he offered no photographic proof of his accomplishment, saying an avalanche -- that nearly claimed his life -- had knocked his camera out of his hand.

Nevertheless, he was awarded the Piolet d'Or, mountaineering's top accolade, for the 2013 climb.