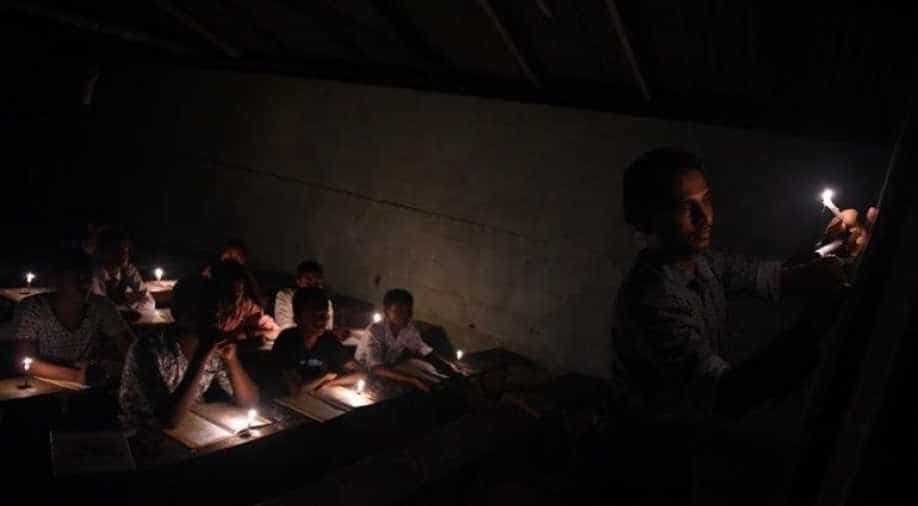 Sri Lankan students work in classes lit by candles after a power cut in Biyagama, a suburb of the capital Colombo, on March 15, 2016 Photograph:( AFP )

Power was restored in Colombo after seven hours, but some other parts of the island nation were yet to be reconnected

The entire nation of Sri Lanka was left without power Monday in a seven-hour outage following a failure at a key electricity facility, officials said.

Minister of Power Dullas Alahapperuma said an unspecified "technical issue" at the Kerawalapitiya power complex just outside the capital Colombo was the cause of the blackout, which hit the entire nation of 21 million people at about midday.

Power was restored in Colombo after seven hours, but some other parts of the island nation were yet to be reconnected.

It was the worst disruption since March 2016, when the whole country was without electricity for more than eight hours following a massive system breakdown.

The public utilities regulator said there would be a probe into the failure and gave the state-run electricity monopoly, the Ceylon Electricity Board, three days to explain the massive disruption.

The power cut caused chaos on already congested roads in Colombo, with traffic lights not operating and police struggling to man key intersections.

Water supply was also affected as there was no electricity to operate the pumps.

Hospitals and other critical infrastructure in the country had power generators. The main airport has remained mostly shut because of the coronavirus pandemic.

Sri Lanka generates just over half of its electricity through thermal power. The remainder comes from hydro and wind power.

Kerawalapitiya is an oil-fired thermal power station with a 300-megawatt capacity, about 12 percent of the country's electricity demand.

Localised power failures are not uncommon but nationwide outages are rare.