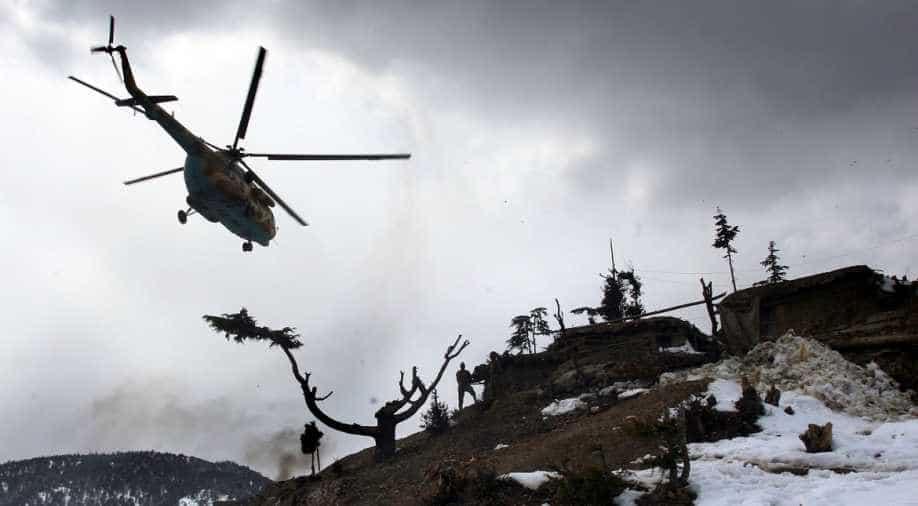 A Pakistani Army helicopter passes over a combat outpost near the Afghan border in the tribal area of North Waziristan, Pakistan Photograph:( Getty )

Pakistani and Afghan soldiers clashed overnight at the main border crossing at the end of the Khyber Pass, officials said today, with at least one killed and several wounded, further straining relations between the militancy-plagued neighbours.

One Afghan soldier was killed and six were wounded, an Afghan official said. The Pakistani army said one of its soldiers was wounded in the fighting at the Torkham Gate crossing in the mountainous region of northwestern Pakistan and eastern Afghanistan.

Both countries blamed each other for starting the fighting, which broke out at roughly 9 p.m. local time on Sunday and continued into the night.

"We currently have agreed on a ceasefire with Pakistan. We hope this problem will end through the work by diplomatic addresses," the Afghan government's chief executive, Abdullah Abdullah, said on Twitter.

Relations between the neighbours have been strained in recent months. Kabul has accused Pakistan of harbouring militants seeking to topple the Afghan government, including the notorious Haqqani network, blamed for high-profile attacks in the capital.

Pakistan denies supporting militants and said it was constructing a border gate near Torkham, a Pakistani town close to the frontier, to prevent militants crossing from Afghanistan into Pakistan.

"In order to check movement of terrorists through Torkham, Pakistan is constructing a gate on its own side of the border as a necessity to check unwanted and illegal movement," Pakistan's army said.

"We have received reinforcement and are ready to defend our country until the last drop of blood in our bodies," he said.

The Pakistan-Afghanistan border has long remained porous and disputed. Afghanistan has blocked repeated attempts by Pakistan to build a fence on sections of the roughly 2,200-km (1,370-mile) long frontier, rejecting the contours of the boundary.

Last month, Pakistan build a border post between Pakistan's South Waziristan and Afghanistan's Paktika province and handed it over to Afghan officials.

Hours later, Afghan authorities shut the post, saying that the actual border lay about a kilometre inside Pakistani territory.