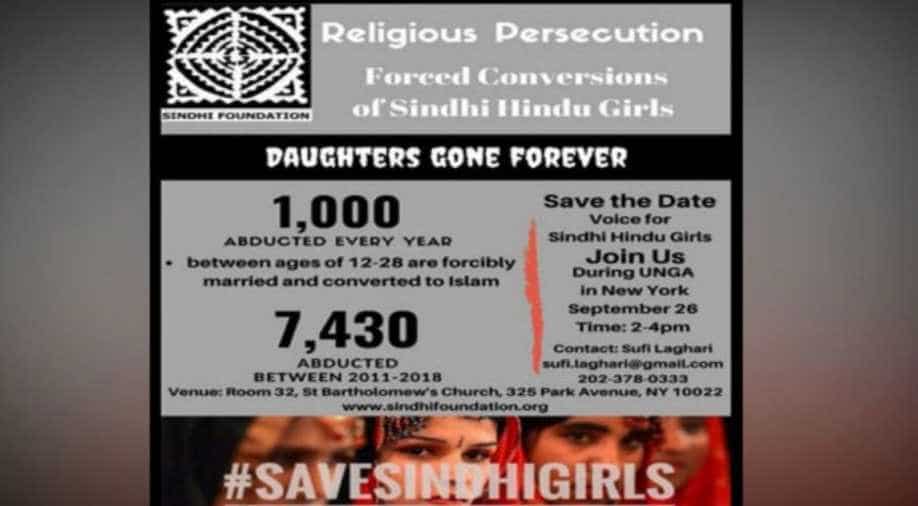 Sindhi Foundation, which has frequently raised the issue of forced conversion of girls in Pakistan, will hold a demonstration under the banner of SaveSindhiGirl.

In a bid to highlight religious persecution in Pakistan, a US-based Sindhi organisation is planning to hold a protest against abduction and forceful conversion of Hindu girls from the community during the upcoming United Nations General Assembly (UNGA) session in New York on September 26.

Sindhi Foundation, which has frequently raised the issue of forced conversion of girls in Pakistan, will hold a demonstration under the banner of SaveSindhiGirl.

The body has noted that there is an escalation of forced conversion in the country.

Every year, around 1,000 young Sindhi Hindu girls between the age of 12 and 28 are abducted, forcibly married and converted to Islam.

Every month between 40 to 60 Sindhi girls are converted.

According to Pakistan's own human rights commission from January 2004 to May 2018, there were 7,430 cases of such abductions of Sindhi girls in Pakistan.

The actual number is estimated to be much higher as most of the cases go unreported.

According to the Human Rights Commission of Pakistan, families who report their daughters as missing are often ignored by the police and their First Information Report (FIR) is never submitted. Therefore, girls are left with their abductors, where they are often coerced into silence through threats or use of violence against them or their families.

During the UNGA meeting, Prime Minister Imran Khan is expected to address the session.

The foundation has said that there is involvement of influential political leaders with links with the Army in the forced conversion of young girls.

Among them is one prominent name, Mian Mitho, a religious leader and politician, who has participated in countless conversions of young Sindhi girls.

He has close connections with both the Army and Imran Khan who have allowed him to do so without receiving any punishment for his actions.

Pakistan has been condemned internationally for cracking down on the minorities living in their countries.

Islamabad has also reportedly been discriminating against its religious minorities which is manifested in various forms of targeted violence, mass murders, extrajudicial killings, abduction, rapes, forced conversion to Islam, etc., making the Pakistani Hindus, Christians, Sikhs, Ahmadiyyas, and Shias one of the most persecuted minorities in the region.

Last month, the United States, the United Kingdom, and Canada had raised the issue of suppression of religious freedom by China and Pakistan and slammed the two Asian nations for "persecuting and repressing" their religious minorities.

During the meet on Safety of Religious Minorities, the US, UK, and Canada expressed concerns over the increasing, widespread and undue restrictions on religious freedom in the two countries.

They also highlighted the discrimination suffered by the Uyghur community in China and of Christians, Ahmadis, Hindus and other minorities in Pakistan.