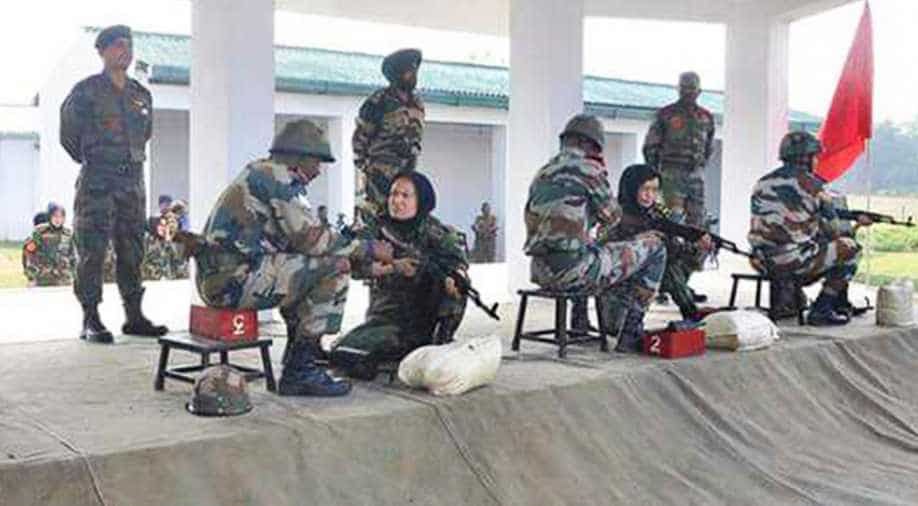 India's only academy to impart training to women cadets and officers, OTA is hosting women officers from the Afghanistan Armed Forces for the second time, the first being last year with 20 women.

Head scarf-clad Zuhra Nabizada showed no traces of emotion as she handled the machine gun with the ease of a professional during a training session at the shooting range of the Officers Training Academy here.

She is part of a group of 19 women from the Afghanistan Armed forces honing their skills at the Academy.

Wiping the sweat off her sunburnt face, Afghan Air Force's Second Lieutenant Nabizada said this is her second visit to India.

"The first visit was in 2014 to Dehradun to take part in a Taekwondo match," she said.

India's only academy to impart training to women cadets and officers, OTA is hosting women officers from the Afghanistan Armed Forces for the second time, the first being last year with 20 women.

"Compared to last year, the team this year comprises many young officers," Safi said, adding that his country sees the exercise as a knowledge-sharing experience.

The month-long training that began November 26, includes weapons training and drill besides others.

Indian Army's Major Ritu Jaswal said the officers were focused and showed keen interest in what was being taught.

"Each country has a different weapon system... Most of the time they use MI-16 assault rifles, here they get the opportunity to learn to use the Indian Small Arms System - light machine guns," she said.

"However, weather is the major hurdle they face here, as the present temperature in their country is below 5 degree Celsius."

December is the time when Chennai experiences cooler climes, Jaswal, who acted as an interpreter for a majority of the women officers who knew only Pashto and Dari, added.

Nabizada, a trainee pilot, said it was not just about weapons, but the session also fostered her leadership skills and boosted her self-confidence.
She is the only one of her nine other siblings to have chosen a career in the armed forces.

The squad has mostly women below 30 years, while a 50-year-old officer is the seniormost.

About changes made to the training curriculum since last year, an officer said the duration has been extended to four weeks from three weeks last year.

"This has given us more time to teach the officers about everything that is happening in OTA. They also consider it as a lifetime experience," the officer said.

According to OTA officials, the officers also visited various places in the city during the training period which will end on December 26.

Media personnel were allowed to witness a training session in which the women officers showcased their skills in handling light machine guns at the OTA shooting range, abutting Chennai Airport.