SAD, Punjab party with Sikh base, woos marginal social groups ahead of polls 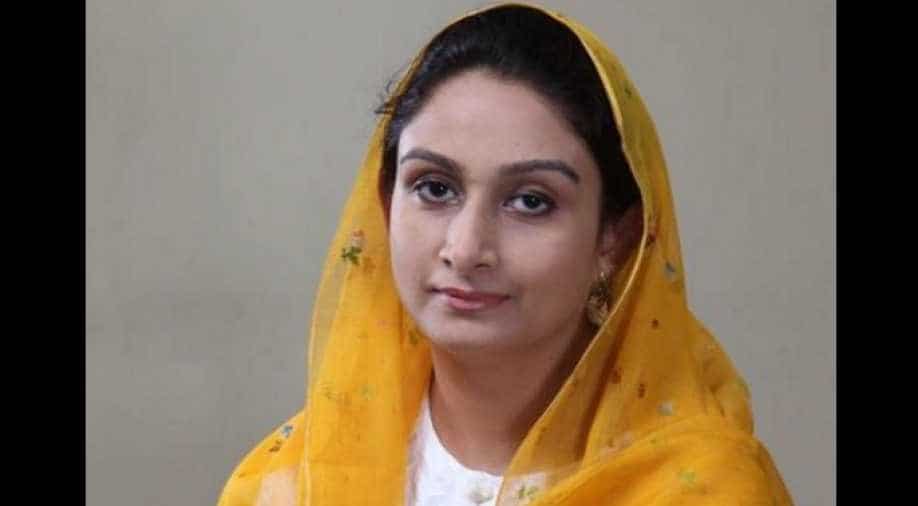 Harsimrat Kaur also spoke freely on the issue of Kashmir and the Shiromani Akali Dal's debacle in the Punjab elections. Photograph:( Twitter )

Central minister for food processing Harsimrat Kaur Badal told WION about the achievements of her party, Shiromani Akali Dal (SAD), in Punjab and said drug use was only 1.2 per cent in her state. She said Punjab gained a bad reputation because of its good record in taking action against drug smugglers that gave the impression that the state had a drug problem.

Q: You have been voted to power twice. Why should people vote for you again?

A: We have been able to restore peace and order in Punjab despite being a border state. Whether it is narco-terrorism or other forms of it, we have been able to give a stable government. There has been no caste agitation in Punjab like Jat or Patidar agitation in other states. So I will count it as an achievement. I am happy to say, be it electricity or water, we have done well. We have become a power surplus state with the cheapest rate of electricity in the country. Our record of road connectivity is very good and our welfare schemes, like atta (wheatflour), dal (lentil) or Shagun (for girl child), have done well.

Q: Despite the fact that you have been appreciated for your heritage initiatives and developing rural infrastructure, there is another side to the story. Unemployment rate is high including debt to GDP ratio.

A: Unemployment rate has come down. We have increased the state's revenue. We have brought down liabilities. Look at air connectivity in Punjab. Besides Gurgaon, there is no other airport in Haryana. We have five airports. We have concentrated on power and water supply. Our work cannot be denied. Amarinder Singh (former Congress chief minister of Punjab) cannot name one thing he did in five years as chief minister.

A: Congress is the main opponent. Kejriwal (of AAP) is not a factor anymore. There was a hype during election. Punjab witnessed 10 years of the Congress-led alliance's  anti-incumbency and eight years of ours. That’s the reason why four (AAP) MPs got elected. In these two years of electing them, we have seen what happened to them. One of them came drunk to Parliament. There is infighting in AAP. Kejriwal is the most discredited leader one can find in Delhi.

Q: Isn't  this election different from the ones in past as this has become a three-cornered contest?

A: I maintain that AAP is the B team of the Congress. Despite threatening to jail (former Delhi chief minister) Sheila Dikshit, Kejriwal went ahead and formed the government in Delhi with Congress' help. Congress tried it in 2012 with us when People's Party of Punjab (PPP) was founded. The experiment died without a whimper. The person who fought against me lost. It is an old story.

Q: The fact of the matter is that Punjab did send four MPs from AAP to Lok Sabha.

A: It is like a two-party system in Punjab. It was because anti-incumbency was at its height both at the state and central level.

A: It’s true. But it happened for good. The AAP bubble would not have burst if that didn’t happen. AAP did not put up any candidate for the by-elections and that’s a sign that they have become unpopular.

Q: What about Navjot Singh Sidhu (former Bharatiya Janata Party leader). He will contest from Congress. Will it impact Shiromani Akali Dal?

A: A rolling stone gathers no moss. He (Sidhu) first wanted to join Kejriwal, then he formed his own party, and now he is out shopping with the Congress. He has lost credibility. He was busy with his shows but kept on blaming the government.  With the government in power at the Centre (national government), Sidhu could have done a lot. (But) He fought with all the local leaders.

Q: Amarinder Singh says this is his last election. He is creating an emotional appeal with it?

A: He says it every time. This is going to be his last election. He blackmailed Rahul Gandhi and threatened to break the Congress and I doubt the Gandhis will forget that. Congress will dump Amarinder after they have used him. That is why Sidhu and Manpreet Badal (former SAD leader who merged his party, PPP, into Congress) are in the party.

Q: Prime Minister Narendra Modi recently praised your father-in-law, Parkash Singh Badal, for the work he has done in Punjab?

A: One has to remember history and we felt that people are forgetting their heritage. Mr Badal concentrated on making a war memorial and then he beautified the Durbar Saheb (Golden Temple). Valmiki’s memorial was made by our government. There was no due given to Bhagwan (Lord) Valmiki (saint venerated by the communities considered to be of a lower caste in India) apart from the history he came with. The scheduled castes form a substantial part of the population in India and no memorial has been made for him.  He focused on other communities. He also worked on the memorial for Bhagwan (Lord) Ravi Das Guru (also venerated by 'lower caste' communities in India). This is the only place where something has been made in his name.

This was also mentioned by the prime minister. He said that while on one hand he has created the temple, on the other hand schools have been created for the poorest of the society. These schools only serve the poorest of the poor where kids from government schools with more than 85 per cent marks are taken in. Food, lodging and every need is taken care off. There are six such schools whose 300 students passed engineering and medical entrance exams. When you go to Durbar Saheb, please also see the Durgayana temple where Hindus worship. Even Jallianwalan Bagh has been re-done. The work showcases harmony.

A: Our neighbour (Pakistan) is behind it. They wanted to disrupt Punjab as well. Jail break was an unfortunate attack. Our police did a splendid job in both the cases. In the latter case, the terrorist was caught. Police action was taken by dismissing people.

A: Demonetisation had had a positive impact on India. I don’t think there is a single person in India who can deny that it was aimed at finishing black money in the country. Public by large is okay (about it), but the Opposition is trying to use the issue because of the public inconvenience it created. Look at the by-polls results. We won most of them.

Q: Drugs is a real problem in Punjab. What has your government done to stop it?

A: It is unfortunate that drug issue is being politicised. Rahul Gandhi (Congress vice-president) said that 70 per cent of Punjabi youth are drug addicts. He said that based on a drug survey done at a rehabilitation centre. It was for a limited number of people, but he used the data for the state.

Q: But the problem exists and it cannot be denied?

A: Rahul Gandhi was wrong. The Army conducted recruitment (in Punjab)  and tested everyone for drugs. Less than 1 per cent of Punjabis were found using drugs. A similar drug test was done on government application where only 1.2 per cent tested positive. We have a live border with Pakistan. People go to work their fields on the other side. Smuggling becomes easier. The first line of defence is India's Border Security Force (BSF). It is their job to prevent it.

Q: Are you happy with the work of the BSF (Border Security Force)?

A: The current situation shows that BSF needs to do more. Congress left the border porous.

Q: It is a grave charge you are making?

A: Yes, I am. For 10 years they didn’t do anything. We have done a good job on seizing drug consignments. Our conviction rates are higher than other states. The impression it conveyed was that Punjab was flooded with drugs. The drugs were not meant for Punjabis. We are just on the drug route (into India). In the process of catching them, we got defamed by our opponents.

Q: Will this election showcase Sukhbir Badal as the chief ministerial candidate?

A: It has been made very clear that he feels honoured to work under him. We will fight elections under the leadership of Parkash Singh Badal. It is the combination of both Badals that works for us.