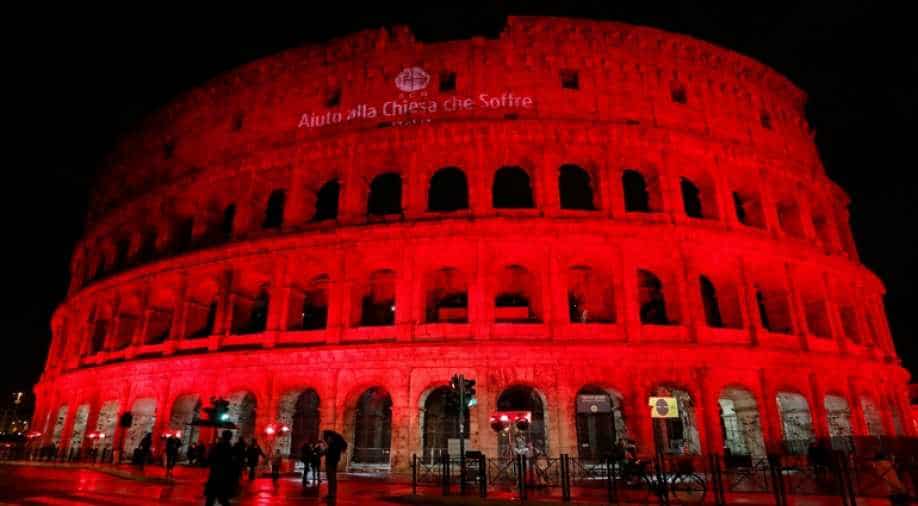 The Colosseum is lit up in red to draw attention to the persecution of Christians around the world. Photograph:( Reuters )

Rome's ancient Colosseum was lit in red on Saturday in solidarity with persecuted Christians, particularly Asia Bibi, a woman condemned to death under Pakistan's blasphemy laws.

Hundreds gathered on a rainy night outside the Roman amphitheatre that is a symbol of the martyrdom of early Christians to hear the husband and daughter of Asia Bibi.

The Catholic woman has been living on death row in Pakistan since 2010 when she was condemned for allegedly making derogatory remarks about Islam after neighbours objected to her drinking water from their glass because she was not Muslim.

Human rights groups such as Amnesty International say the blasphemy law is increasingly exploited by religious extremists as well as ordinary Pakistanis to settle personal scores.

"The aim of the blasphemy laws is crush people who believe differently," Archbishop Nunzio Galantino, secretary-general of the Italian bishops conference, told the gathering.

The law does not define blasphemy and evidence might not be reproduced in court for fear of committing a fresh offence. There are no penalties for false accusations.

Asia Bibi's case drew international attention after the murder of two politicians who tried to intervene on her behalf.

At the Rome gathering, her husband Ashiq Masih said his wife was innocent of blasphemy. "This is just hate against Christians, who are considered impure," he said.

The husband and daughter, who broke down in tears as she addressed the group, were earlier received by Pope Francis, who told her: "I think often of your mother and I pray for her".

European Parliament President Antonio Tajani, who has been tipped as a possible Italian prime minister after next week's election, said that persecution of Christians was "a genocide".

"A message must be sent from this place. It is the duty of Europe to defend these values (of religious liberty) wherever on earth they are trampled on," Tajani said.

Rebecca Bitrus, a Nigerian Christian woman who was held for two years after she was abducted by Boko Haram Islamist militants, told of how she was repeatedly beaten and raped.

During the event, organised by the Catholic group "Aid to the Church in Need," there were live link-ups with Aleppo, Syria, and Mosul, Iraq, both of whose minority Christian populations have been hit hard by wars.