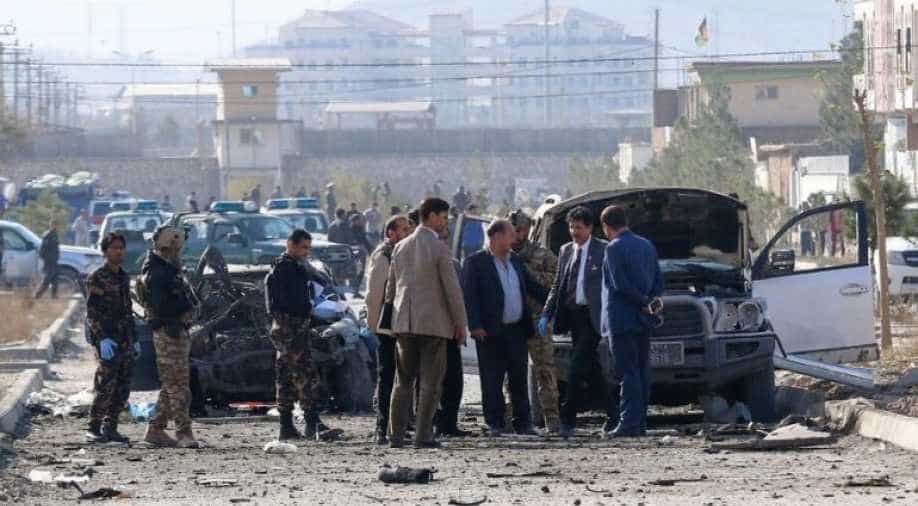 Representative: Security personnel and investigators gather at the site of a suicide attack in Kabul on November 13, 2019. At least seven people were killed and seven wounded when a car bomb detonated during Kabul's busy morning rush hour on November 13, Photograph:( AFP )

The bombing, which occurred in Kandahar, the birthplace of the Taliban, came a day after a blast in a mosque in Kabul's fortified Green Zone killed two people including a well-known imam

A roadside bomb tore through a small bus in southern Afghanistan on Wednesday, killing nine civilians including women and children, officials said.

The bombing, which occurred in Kandahar, the birthplace of the Taliban, came a day after a blast in a mosque in Kabul's fortified Green Zone killed two people including a well-known imam.

Also read: Mosque Blast in Kabul kills 2, including an imam

Several victims were women and children, said Baheer Ahmad Ahmadi, spokesman to the provincial governor, who also confirmed the toll.

No one claimed the Kandahar attack, but Barekzai blamed the Taliban.

In Kabul on Tuesday, an imam and a worshipper were killed in a prayer-time bombing at a popular mosque in the fortified Green Zone in Kabul.

That bombing, which the Taliban condemned, came a day after seven civilians were killed in the north of the country in a roadside bombing authorities blamed on the insurgents.

On Wednesday, the UN mission in Afghanistan said homemade bombs used by the Taliban to target Afghan security forces have killed at least 10 civilians in the past two days.

The UN urged the militants to "stop using these illegal improvised mines".

Despite these attacks, overall violence across much of Afghanistan has dropped since May 24 when the Taliban instigated a rare three-day ceasefire to mark the Eid al-Fitr holiday.

Officials have acknowledged a lull in violence, though they blamed the militants for some deadly attacks in recent days.

Before the ceasefire, violence had surged since the Taliban signed a landmark agreement with the United States in February.

The deal paves the way for the withdrawal of all foreign forces by May next year.