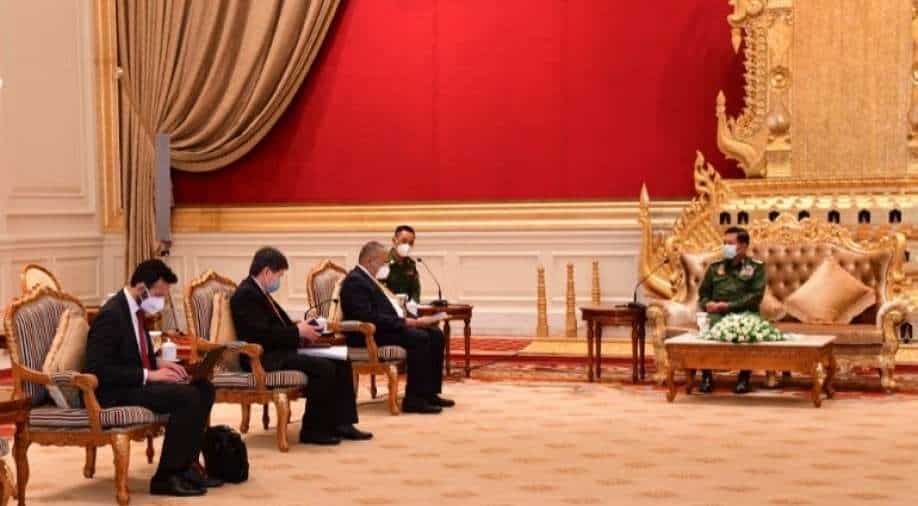 Myanmar's junta has shown little sign of heeding April's five-point agreement among the 10 ASEAN countries, including Myanmar, which calls for an end to violence, political talks and the naming of a regional special envoy

Envoys from the Association of Southeast Asian Nations (ASEAN) called on Myanmar's junta to free all political prisoners and discussed implementing a regional 'consensus' to end turmoil since the February 1 coup, the regional bloc said.

Myanmar's junta has shown little sign of heeding April's five-point agreement among the 10 ASEAN countries, including Myanmar, which calls for an end to violence, political talks and the naming of a regional special envoy.

The ASEAN statement dated June 5 said the objective of the visit was to discuss how Myanmar would reach 'a peaceful solution in the interests of its people' by implementing the five points.

It said they had also 'called for the release of all political prisoners, including women and children and foreigners' - an appeal that was not on the consensus but is supported by many ASEAN members.

Reuters was unable to reach a junta spokesman for comment.

The state-run Global New Light of Myanmar said the meeting covered 'implementation of the recommendation of initial survey of ASEAN' and 'terror acts' by junta opponents and the army's plan to hold elections.

The junta has failed to impose control since seizing power from elected leader Aug San Suu Kyi, who is among more than 4,500 people detained since the coup. At least 849 have been killed, a rights group says. The army disputes that figure.

Opponents of the junta have voiced frustration at the lack of tough action by ASEAN.

Myanmar's crisis is also expected to be a topic at a special ASEAN-Chinese foreign ministers meeting in Chongqing this week. The junta's foreign minister, Wunna Maung Lwin, will also attend.

China's state-run Global Times newspaper quoted the junta leader as saying Myanmar was willing to coordinate implementation of the consensus. It reported that the ambassador had said China was ready to support implementing the consensus.

Opponents of the junta have been wary of the role of China, which unlike Western countries has not been vocal in criticising the coup.

The army said it seized power after election authorities rejected its accusations of fraud in a November 2020 ballot swept by Suu Kyi's party. She now faces several charges and is due to appear in court again on Monday.