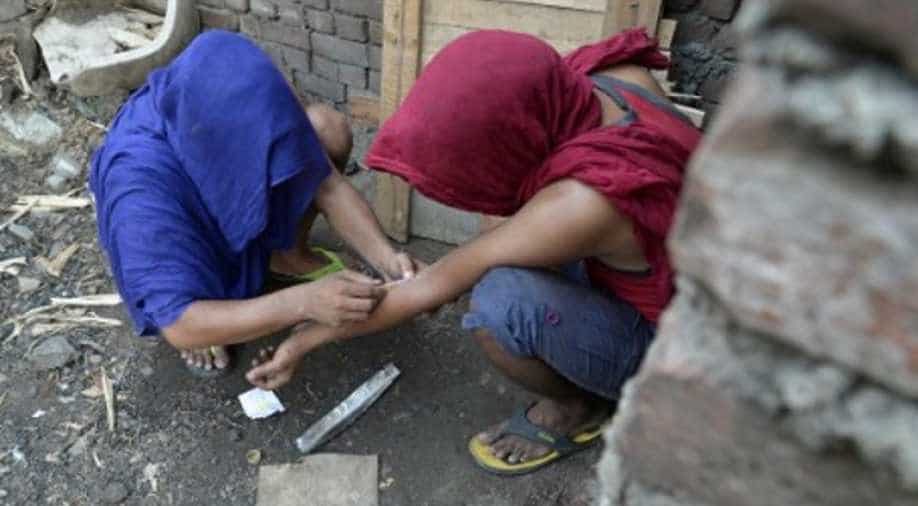 A study conducted by Society For Promotion Of Youth & Masses (SPYM) and researchers at AIIMS found that heroin was the most common drug used, followed by opium, doda or bhukki. Photograph:( AFP )

All that remains of Pargat Singh is a framed photograph and memories of him held dear by his family. The 30-year-old, who started taking drugs a few years back, died last December leaving behind a eight-year-old daughter, an inconsolable mother and two siblings, one of whom has now suddenly found himself in the shoes of the family’s breadwinner.  This is not an isolated case. It is taking place in village after village in Punjab. Drug abuse is obliterating a whole generation of youth and devastating thousands of families.

Kazikot—a small village in Punjab’s border district of Tarn Taran—is where Pargat Singh lived…and died. His death and that of so many others is a recurrent theme. Many who fell prey to drugs did reform but drugs still flow freely here.

Three hundred rupees is all it takes for youngsters like Jimmy (name changed) to procure a shot each of a muscle relaxant called norgesic and an anti-allergic called pheniramine maleate - controlled drugs that cannot be bought over the counter but are available in the village. Once Jimmy manages to procure the dose, he looks for a deserted corner in the village, mixes both drugs and injects them into his veins. Many outsiders routinely come to Kazikot to get their fix. Those with money prefer to inject heroin.

“Around 10-15 youngsters from our village are serving sentences in jail after being arrested for drug abuse,” says Kazikot’s Sarpanch Harpal Singh. He hastens to add that the situation is much better now and that drug abuse in Kazikot has indeed come down because of a massive crackdown by the police. What rankles the residents of this village is the “bad name” their village has got because of the drug menace.

Punjab’s drug problem first came under the spotlight when Congress leader Rahul Gandhi said in 2012 that seven of 10 Punjabi youth were hooked on drugs. His remarks were based on an affidavit filed by the Punjab government in the High Court in 2009 which was based on a 2006 study conducted by Dr Ranvinder Singh Sandhu, a professor of sociology at Amritsar’s Guru Nanak dev University.

The affidavit quoted Dr Sandhu’s study as having said that drug addiction in Punjab was 70 per cent but it blundered by not mentioning that the study had been done on a sample size of just 600 drug addicts. Despite the controversy over figures, the affidavit was not too off the mark when it stated that the whole of “Punjab is in the grip of drug hurricane which weakens the morale, physique and character of its youth” and that the “vibrant punjab that had ushered in the green revolution is today living in dazed stupor as 67 percent of the rural households in the state have at least one drug addict” and also that “drug addiction has become a stigma that belies claims of prosperity in the state”.

The government’s affidavit had further said that “the vibrancy of Punjab is virtually a myth” and that “many sell their blood to procure daily dose of deadly drugs, even beg in streets to satisfy their addiction”.  It went on to add that opiates, their derivatives and synthetic opiate drugs are the most preferred drugs in almost 70 per cent of the addicts and that 7 out of 10 college going students abuse one drug or the other, three out of 10 girls have abused one drug or the other and 66 per cent of the school-going students abuse gutkha or tobacco. It added that 16 per cent of the state was hooked on hard drugs.

The same affidavit stated that drug traffickers had changed their overland route and that of all the narcotics drugs transited through India, around 40 percent were going through Punjab. “Punjab alone accounted for roughly over one-fifth of the total recoveries of heroin in the country. The traffickers are using porous areas on the Punjab border, trains and buses for smuggling afghan heroin coming via Pakistan which is moved for distribution within and outside the country,” it added.

A drive to some border villages in Tarn Taran district is illuminating. All that separates India and Pakistan is a barbed wire fence over vast tracts of land. While there are Border Security Force (BSF) outpost set-up all along the border, there are huge areas which are not under surveillance. That also explains why neatly wrapped packages containing heroin are simply thrown over the fence into India and are quickly collected. In villages like Bidhi Chand Chhina and Naushahra--two of the many Indian villages located just meters away from the international border with Pakistan--the smuggling and availability of drugs like heroin is an open secret.

The numbers speak for themselves.  Since 2014 and until January 24 this year, the Punjab Police arrested close to 37,000 people for drug abuse under the Narcotic Drugs & Psychotropic Substances act. Close to 31,000 cases under the NDPS act were registered in Punjab during the same period.

A look at the quantum of drug seizures by the border security force in Punjab in the past five years underscores the gravity of the situation. Between 2012 to 2016, a staggering 1,547 kilograms of heroin was seized on the India-Pakistan border in Punjab. This roughly translates into an average 309 kilograms per year. At 362 kilograms, year 2014 saw the highest seizures. This year, already 8 kilograms of heroin has been seized from the border areas.

In 2015, a study titled "Punjab Opioid Dependence Survey (PODS)" was conducted by Society For Promotion Of Youth & Masses (SPYM) and a team of researchers from National Drug Dependence Treatment Centre (NDDTC) of Delhi’s All India Institute Of Medical Sciences (AIIMS), in collaboration with Department Of Health And Family Welfare of the Punjab Government.

The study was carried out in the 10 districts of Bathinda, Ferozepur, Gurdaspur, Hoshiarpur, Jalandhar, Kapurthala, Moga, Patiala, Sangrur, Tarn Taran. Together these 10 districts comprise about 60% of the population of Punjab and are representative of the entire state on many parameters like population, male:female ratio, urban:rural ratio, and location at international or inter-state border.

This study was conducted over a three-month period and data for this study was collected from 3,620 opioid dependent individuals across 10 districts at government de-addiction centres by trained counsellors under the supervision of psychiatrists and nodal-officers working with the Punjab government.  Informed consent was obtained from all the respondents and clearance was obtained from the institute ethics committee of AIIMS, New Delhi. The data was collected in the digital format and was subsequently analysed by the researchers at AIIMS using special analytical techniques.

Here’s what the study found out:
--the study estimated the size of the opioid-dependent population in Punjab at a staggering 2.32 lakh.
--76% opioid dependent individuals are in the age group of 18 to 35 years
--99% are males and 54% are married
--89% are literate and have some hold college degrees
--most are employed as unskilled workers or labourers and farmers.
--56% belong to rural areas and almost all (99%) report Punjabi as their mother tongue.

The study found that heroin was the most common drug used by this group, followed by opium, doda or bhukki. Around 14 per cent drug users were found to be using a variety of pharmaceutical opioids. It also said that about one-third take their opioid drugs through injections and among them almost 90% inject heroin.

While 'peer-influence' was the found to be the main reason for taking drugs, the study also said that an average heroin using individual spends about Rs 1,400 a day on drugs--an opium users spends Rs 340 per day while a pharmaceutical-opioid user spends Rs 265 per day. It also found that a large majority of drug users cited suffering from physical, mental or social adverse consequences as reasons for their addiction. “While only a minority report having been arrested and having been jailed, almost everyone who had been to jail reports continuing drug use, while inside the jail,” it added.

At the Swami Vivekanand Drug Deaddiction & Treatment Centre in Amritsar—one of the biggest in the state, there’s a steady stream of patients coming for treatment. In fact, ever since it was set up in 2012, this centre has already treated about 23,000 patients. On an average ten new patients come in every day, officials say.

“The number of patients coming in for drug de-addiction treatment steadily rose in the past few years. In fact, in 2014, around 9,500 patients came in for treatment, ” says Dr P.D Garg, Professor & Head Of Department Of Psychiatry, Swami Vivekanand Drug Deaddiction & Treatment Centre in Amritsar.

“In school, we started off with cigarettes, then moved on to liquor and then to drugs. “White” or “Chitta” is the craze in Punjab these days…the whole state is after it. The government is involved in the sale of these drugs because how can such a trade flourish with the government’s support,” says a young drug addict visiting this de-addiction centre, accompanied by his mother.  “I have picked up bodies of my friends who died after injected drugs, at times because they used the injection incorrectly,” he says, adding that there are thousands like him in the state.

Then there are localities like Maqboolpura in the heart of Amritsar which are constant reminders of the havoc drug abuse has wreaked on Punjab. Maqboolpura is now known as the “colony of widows” because a large number of women living here are said to have lost their husbands to drug abuse.

For the first time, an election in Punjab witnessed the issue of drug abuse being talked about so vociferously. A lot of politics was also played over it. Leaving aside the rhetoric, the fact that this great human tragedy is finally being acknowledged is probably the only silver lining in this cloud.