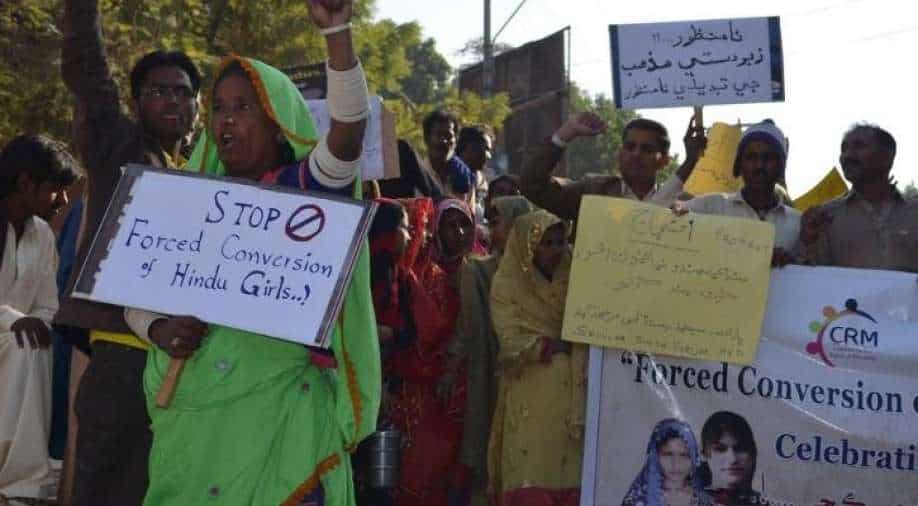 Arzoo Raja was abducted in broad daylight from outside her house in Karachi’s Railway Colony on October 13.

Many people in Karachi took to streets to protest the alleged abduction and forced conversion of a Christian girl to Islam.

Arzoo Raja was abducted in broad daylight from outside her house in Karachi’s Railway Colony on October 13.

The parents of the 13-year old were later told by police that she had converted to Islam according to her own free will and married her 44-year-old abductor Ali Azhar. Arzoo’s family lodged a police complaint and filed a petition in a local court to seek her safe return.

Following this, in a shocking ruling on October 27, the Sindh High Court validated the child marriage and refrained police from arresting the prime suspect.

The girl's mother Rita Masih said she and her family had been threatened by men in civilian attire on court premises.

Hearing of Arzoo Masih in Karachi High Court. Parents are not allowed inside while the abductor allowed to be present in the courtroom. Look at the condition of her family members.
Shame on the authorities.@ShireenMazari1 is this how you are protecting minorities?@sherryrehman pic.twitter.com/nHG5TzY9ml

Around 400 people, mostly Christians,  gathered outside St Patrick's Cathedral and the Karachi Press Club on Wednesday to demand a fair trial and justice from the Sindh authorities, police and judiciary.

The protesters, including the girl's family, slammed the Pakistan government and police. They shouted slogans, slamming the government for its 'indifference' towards minorities. They also expressed dismay over the lack of media coverage of the issue, saying that the plight of minorities was not given the attention it deserved.

A cross party group of British parliamentarians also condemned the abduction, forced conversion and forced marriage of the teen.

Abductions, forced conversions and forced marriages of girls and women from the minorities background has become a serious concern in Pakistan. It is estimated that approximately 1,000 -- mostly Hindu and Christian -- girls, are abducted, forcibly converted and forcibly married every year.