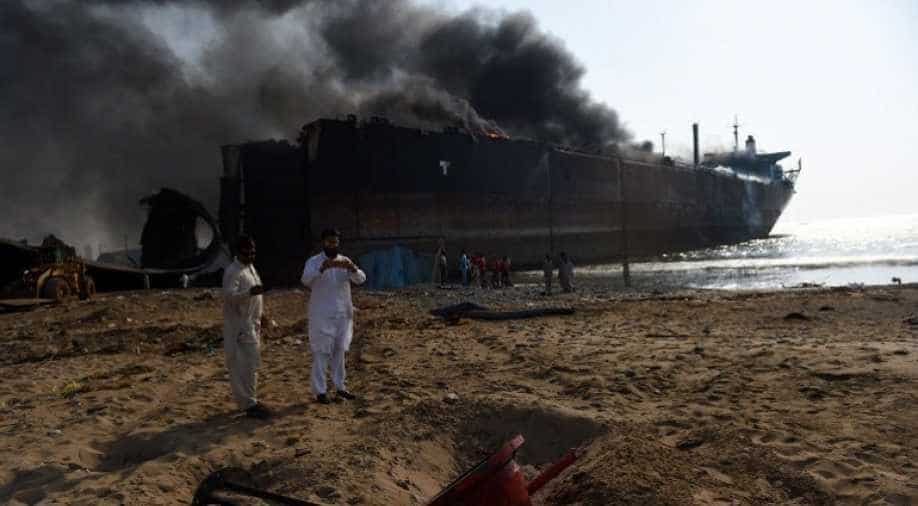 Local firefighters supported by the navy and coastguard were still battling to extinguish the fire Wednesday, commissioner of Kallat region Muhammad Hashim said. Photograph:(AFP)
Follow Us

The death toll from an explosion and fire at a Pakistan shipbreaking yard has risen to 16, officials said on Wednesday, as a search continued for more victims.

At least 59 others were wounded on Tuesday when a gas cylinder exploded and started a fire inside an oil tanker at the Gadani yard in the southwestern province of Balochistan, 50 kilometres (30 miles) west of Karachi.

"We have found four more bodies in the sea. These bodies have minor burn injuries, so we are unsure whether they died inside the tanker and fell down in the sea or they jumped down to save themselves from the fire," he said.

Muhammad Hashim, the commissioner of Kallat region of which Gadani is a part, confirmed the latest toll.

It was not clear how many people may still be missing.

Local firefighters supported by the navy and coastguard were still battling to extinguish the fire Wednesday, Hashim said.

He said the contractor for the tanker work had been arrested and all shipbreaking at the yard has been banned while safety standards are reviewed.

Industrial accidents are common in Pakistan, with workplaces often forgoing basic safety measures and equipment in the absence of legislation to protect labourers.

A devastating fire at a textile factory in Karachi killed 255 people in 2012.