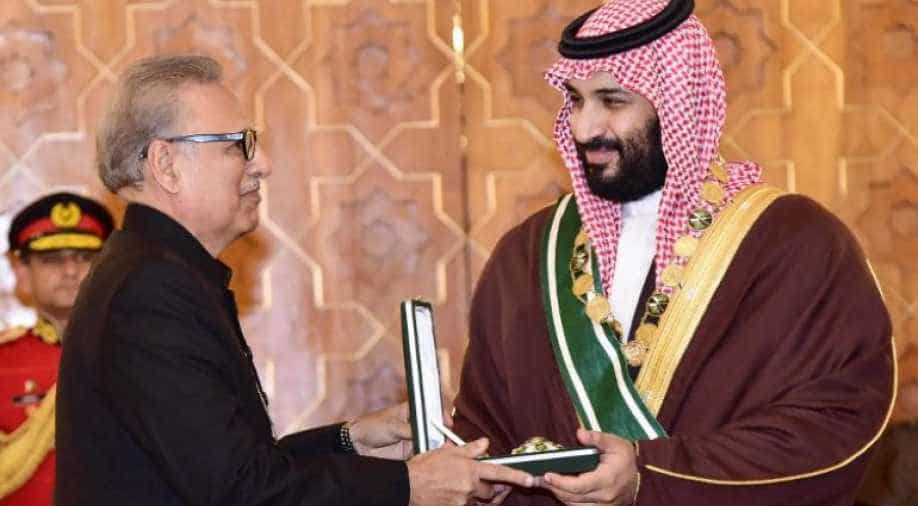 The ceremony, telecast live on the state-run television, was held a day after the prince announced multi-billion dollar investments in Pakistan.

Pakistan on Monday conferred its highest civilian award to the crown prince of Saudi Arabia at the end of his two-day visit to the South Asian country.

The ceremony, telecast live on the state-run television, was held a day after the prince announced multi-billion dollar investments in Pakistan.

The Saudi prince said the relationship between the two countries was based on the principle of Islamic solidarity.

The award ceremony was held at the Presidential Palace and was attended by Prime Minister Imran Khan and Army Chief General Qamar Javed Bajwa.

Bin Salman met with Alvi and Bajwa before the ceremony to discuss Pakistan's role in peace talks between the United States and the Afghan Taliban.

Bin Salman's Pakistan trip comes as his global image has taken a hit after the brutal murder of journalist Jamal Khashoggi in October last year at the Saudi Arabian embassy in Istanbul.

The Saudi delegation travelling with the prince signed seven trade agreements on Sunday and $20 billion investment deals in areas including mining, petrol and renewable energy.

These investments are said to be a major help to Pakistan overcome its financial crisis with a 6.6 per cent budget deficit of the gross domestic product amid declining foreign exchange reserves for which it has sought $12 billion bailout from the International Monetary Fund.

In another gesture towards Saudi's historic partner, Bin Salman ordered the release of 2,107 Pakistani prisoners in Saudi Arabia, according to Minister for Information and Broadcasting Chaudhry Fawad Hussain.

Some 2.5 million Pakistanis work in Saudi Arabia and remittances sent by them are fundamental for the economy of the country, but a larger perception of them being abused and thousands being imprisoned exists.

At the conclusion of his two-day visit to Pakistan, Bin Salman was scheduled to travel to India to meet Indian Prime Minister Narendra Modi.

The tour comes at a time of escalated tensions between India and Pakistan following Thursday's attack against a security convoy in Indian Kashmir, which left 42 paramilitary troopers dead. Pakistan has dismissed India's allegations that Islamabad was involved in the attack.

Saudi Foreign Minister Adel al-Jubeir, who is travelling with the prince, told reporters in Islamabad that his country would try to de-escalate tensions between the two neighbours and see how differences between them could be resolved peacefully.

India has vowed to retaliate and "isolate" Pakistan diplomatically in the international community.