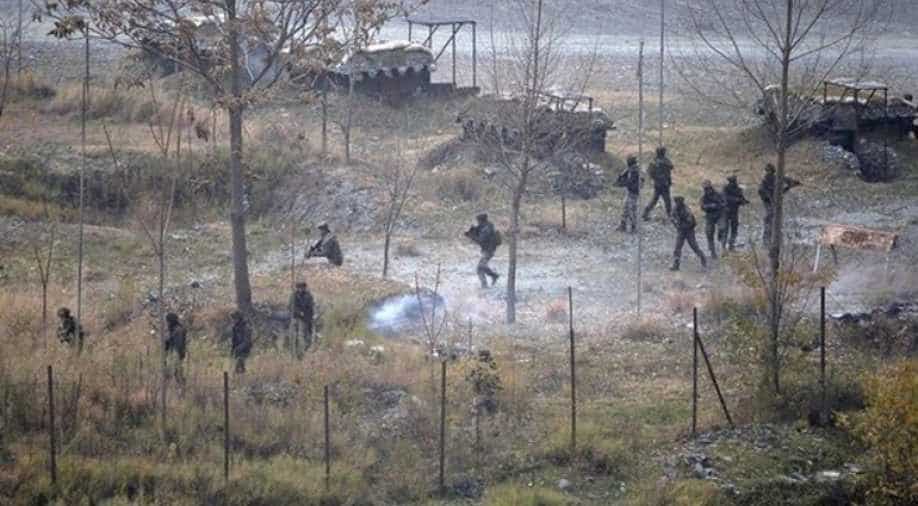 A BSF and an army personnel were killed after Pakistan troops opened fire in Poonch district. Photograph:( ANI )

The Indian Army might just have walked into a death trap set up by Pakistan's Border Action Team which operates across the LoC, official sources said ||The Indian Army has warned of retaliation, saying it will appropriately respond to the attack

Pakistan has denied mutilating bodies of two Indian soldiers in the troubled state of Kashmir.

"Pakistan Army did not commit any ceasefire violation on LoC (Line of Control) as alleged by India. Indian blame of mutilating Indian soldiers' bodies is also false," a statement from the Pakistan Army's Inter-Services Public Relations wing said.

"Pakistan Army is a highly professional force and will never disrespect a soldier," it said.

On Monday afternoon, Indian Army's Northern Command issued a press release today saying, "in an unsoldierly act by the Pakistan army the bodies of our two Indian soldiers in the petrol were mutilated", the press release added, "The Pak army will be appropriately responded".

"The government of India strongly condemns this act. The whole country has full faith in our armed forces which will react appropriately to the act," he said.

The incident comes after two soldiers were killed as Pakistan troops fired rockets in the Krishna Ghati sector of Poonch district in Jammu & Kashmir early today. The firing began at 8:30am local time (IST) as Pakistan used rocket launchers and automatic weapons on the Indian posts.

The Indian Army might just have walked into a death trap set up by Pakistan's Border Action Team (BAT), PTI quoted official sources as saying.

As they were looking for landmines, the patrol was taken by surprise by the Border Action Team which had laid an ambush over 250 metres deep inside the Indian territory, official sources said.

"It was a pre-planed operation by Pakistan army. They had pushed in the Border Action Team over 250 metres deep inside Indian territory and set up the ambush for a long period to carry out the attack," a senior officer said in Jammu

"Their target was a patrol party of 7-8 members, which had come out of a post," the officer said, adding that as the posts were engaged, the patrol team members ran for cover.

The BAT, the core of which is formed by the SSG (Special Services Group), is specifically employed for action across the LoC.

Its primary task is to dominate the LoC by carrying out disruptive actions in the form of surreptitious raids.

There have been several BAT attacks in the past in which jawans have been beheaded or their bodies mutilated.

On October 28, 2016, militants attacked a post and killed an Indian army soldier and mutilated his body close to the Line of Control (LoC) in the Machil sector

In January 2013, Lance Naik Hemraj was killed and his body mutilated by BAT. It also beheaded Lance Naik Sudhakar Singh. Constable Rajinder Singh of the BSF suffered injuries in the attack.

In June 2008, a soldier of the 2/8 Gorkha Rifles lost his way and was captured by BAT in Kel sector. His body was found beheaded after a few days

During the 1999 Kargil conflict, Captain Saurabh Kalia was tortured by his Pakistani captors who later handed over his mutilated body to India.

In February, 2000, terrorist Ilyas Kashmiri had led a raid on the Indian army's 'Ashok Listening Post' in the Nowshera sector and killed seven Indian soldiers.

This is for the eighth time Pakistan has violated ceasefire in last two months by resorting to shelling and firing.

In an unsoldierly act by the Pakistan Army, two jawans were killed in unprovoked firing by Pakistan today morning and their bodies were mutilated. WION brings you more on this story (WION)

The valley has been roiled by violence in recent months, with security forces opening fire on stone-throwing protesters.

Indian troops last week shot at a crowd of demonstrators outside an army garrison where militants had earlier killed three soldiers, hitting one civilian who later died.