Pakistan battles locusts by turning them into chicken feed 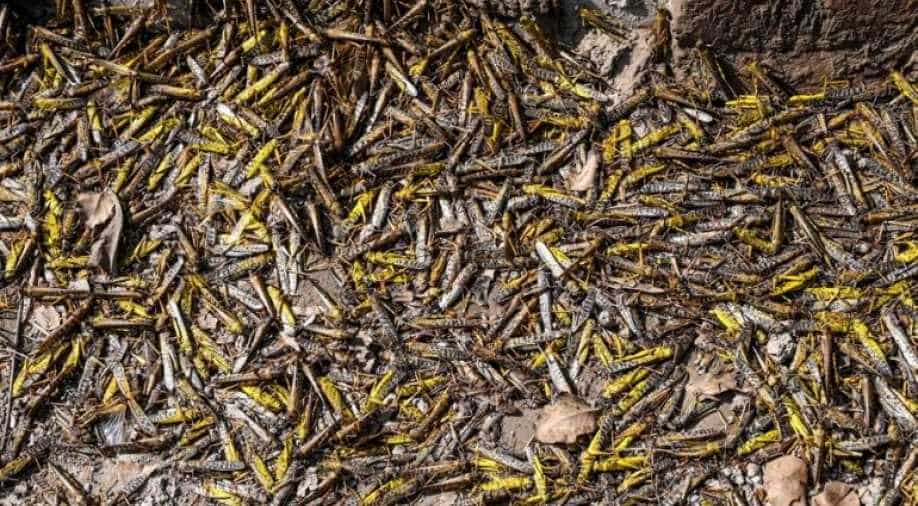 In this file photo taken on February 23, 2020, dead locusts are seen on the ground at a farm in Pipli Pahar in Pakistan's central Punjab province Photograph:( AFP )

Chickens in Pakistan have been feasting on captured locusts under an initiative to combat swarms of the insects that are threatening food supplies in the impoverished country.

Prime Minister Imran Khan has endorsed plans to expand a pilot project in the bread-basket province of Punjab, where villagers earned cash to gather locusts that were then dried out, shredded and added into poultry feed.

Farmers are struggling as the worst locust plague in 25 years wipes out entire harvests in Pakistan's agricultural heartlands, leaving people scrambling for income.

Muhammad Khurshid from Pakistan's food ministry and biotechnologist Johar Ali set up the programme, drawing on efforts in war-ravaged Yemen, where authorities have encouraged people to eat the protein-rich locusts amid famine.

The pair chose Punjab's Okara district, where farmers had not used any pesticides that would make locusts unsuitable for consumption.

"We first had to learn, and then teach the locals how to catch the locusts. Nets are useless against them," Khurshid told AFP.

At night the creatures cluster on trees and plants, making them easy to scoop up as they lie motionless in the cooler temperatures until the sun begins to rise.

For a reward of 20 rupees (12 cents) per kilogram of locusts, locals worked all night to collect them.

One farmer who lost all her crops to the insects said she and her son earned 1,600 rupees ($10) during a single locust-gathering outing, helping to offset the financial damage.

Organisers struggled at first to convince farmers to join the hunt, but by the third night word had spread and hundreds joined in -- turning up with their own bags to stuff full.

With 20 tonnes of captured locusts, authorities ran out of money to pay the collectors and the programme was paused.

The ministry, which recently announced the results of February's pilot, is now preparing to expand the project to other locations.

Multiplying in monsoon
The harvested locusts went to Hi-Tech Feeds -- Pakistan's largest animal-feed producer -- which substituted 10 percent of the soybean in its chicken food with the insects.

"There was no issue with the feed, the locusts have a good potential for use in poultry feed," general manager Muhammad Athar said, after trying the modified product on 500 broiler hens.

While the project is not a solution to the devastation caused to crops, it can provide hard-hit farmers with a fresh revenue stream and relieve pressure on authorities struggling to distribute locust-beating pesticides.

Locust swarms have gnawed their way through crops across East Africa, the Arabian Peninsula and parts of India this year, and experts fear their numbers will explode as monsoon rains arrive this month.

The crisis is so severe that the government has declared a nationwide emergency and appealed for help from the international community.

Bananas, mangoes, vegetables and other crops are all vulnerable -- raising fears of food shortages -- as are the wheat and cotton harvests that provide Pakistan with vital revenue.

According to the UN's Food and Agriculture Organization, Pakistan could suffer about $5 billion in losses if 25 percent of its crops are damaged.

A reduced harvest could also push prices up and risks worsening food insecurity.

About 20 percent of the population are already undernourished, with almost half of all children under five stunted, according to the World Food Programme.