Opinion: I need to speak out in support of Hindu-Muslim marriage. This is why. 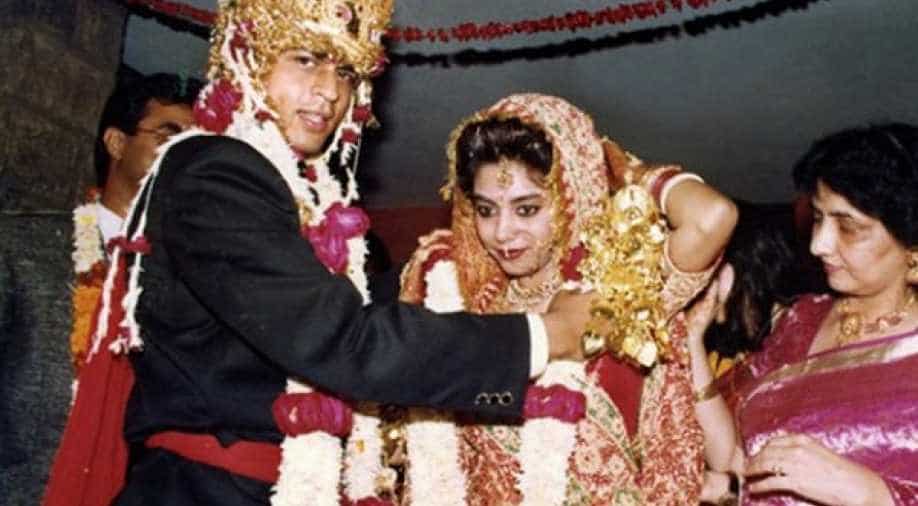 Bollywood has some very successful fairy-tale inter-faith marriages. SRK and Gauri is just one of them. Photograph:( DNA )

I find that I ask myself a similar question regularly these days. It's this: Where are we headed?

Most recently, it was when I read reports of a young couple's decision to marry being questioned by self-appointed 'protectors' of a faith.

Where does the nation go from here? If love between two people of different religions needs sanction from all and sundry? Are inter-caste weddings next on the list requiring sanction?

It strikes me as strange that 'incestual' marriages between uncle and niece within the Hindu tradition continue in parts of this country, and yet we have trouble digesting consenting adults choosing to marry just because they're born to different religions.

Perhaps, this estimation is too vague.  Given that the rage (at least from media reports) is, for the most part, comes to be directed at marriages between members of two specific religions: Hinduism and Islam. More intriguing is that these flag-bearers of propriety are more incensed when these unions involve Hindu women and Muslim men.

Here's what I think: an abiding Indian tradition of tolerance is being hacked away, slowly, and unfortunately, no longer insidiously but openly. In fact, in doing so, we're mirroring the very image of a hard-line form of faith that these very same mascots of Hinduism openly castigate. How are these saffronites of Hinduism any different from the bearded Mullahs of Islam?

This is not the Hindu faith I grew up with. It is some hydra-headed monster which is politically motivated and propagated. And, if they aren't stopped with vocal disavowals of the venom they're spreading, tolerance, acceptance and fellowship will become chimeras, to be replaced by stances hardened in bigotry.

Here's why the incident in Ghaziabad has evoked these emotions in me: I was that young girl's father a few years ago, when my own younger daughter told me that her Muslim boyfriend and she had decided to get married.

If I say I was entirely on board from the word go, that would be an untruth. I had my concerns. The reportage on extremist Islam has left the majority of Muslims open to unwarranted criticism. They are asked to demonstrate their differences and publicly express their rage at Islamist terrorist attacks. They may be subject to more scrutiny when they travel overseas. They may face trouble when they go looking to rent an apartment.

These were my concerns for my daughter and her decision to marry outside of Hinduism. Add to that the work of destiny: her first name is Islamic. A beautiful two-syllable Arabic name; a powerful name with a powerful story. And yet, by marrying a Muslim the assumption would be that she too is Muslim; that her husband and she were a Muslim couple, open to the scrutiny I've listed above.

The conviction that my daughter and son-in-law had put some of my concerns to rest. What really made things easier was the manner in which my nonagenarian father reacted to their announcement. A military veteran and almost entirely blind in both his eyes, he pronounced his happiness at their decision after shaking my son-in-law's hand: 'a firm handshake,' he said, 'is a fine way to know a man. Yours has just the right strength. Do well by my grand-daughter; I'm certain she'll do well by you.'

My daughter and son-in-law chose to marry the very same way that the couple in Ghaziabad did. Through legal sanction from the Indian Constitution, under the Special Marriage Act. I shudder to think what my reaction could have been had a mob of men claiming to protect my faith had come knocking on my door to demand answers to a marriage sanctioned by law.

Thankfully for us, they didn't. And yet, if they needed to they could have.

After all the rigmaroles of the SMA made my family's address public, as that of my son-in-law's parents. My daughter's agency as a 30-year-old adult was a trifling when faced by the lengthy processes of legal sanction: she and her husband needed our sanction, his parents sanction, their intent to marry had to be advertised so that anyone who 'objected' to it could make their displeasure known. What is the point of it all? Other than to dissuade consenting adults whose faith takes a back seat when confronted with love?

Unfortunately, criticism of fanning the bogey of 'love jehad' has been far from forthcoming from the quarters that matter: strong, political voices that use megaphones like social media to their advantage with nary a concern on most days. The silence is deafening.

For me, the Ghaziabad story stands out in many ways, because the fringe's ability to work with impunity and without fear of repercussion is no longer a rural outpost. It has come knocking on the door of the cities that forms part of the national capital region. It has invaded the privacy of an educated, well-placed and, from what I understand, wealthy family.

The protection that we thought we gave ourselves from the narrow-minded bigotry of populism stands threatened. By educating our children, raising them to eschew prejudice, in showing them the beauty of pluralism and the confines of purism, we thought we were safeguarding them; wrapping an impenetrable cloak of fortitude around them. And yet, today, my family, my wife, and I, as well as many others like us, stand bare to the elements of fanaticism.

I'm a military veteran, a man who spent his youth and adulthood standing shoulder to shoulder with Indians of every faith, caste, creed and gender. Not so that very pluralism and diversity could be brought to its knees, but to make sure it's a legacy passed on in eternity.

I write this because if I didn't I'd form part of a silent majority. I'd form part of a system that is already intruding in our ways of life in unimaginable ways, but for fear, that by staying quiet I'm no better than our political elite: sanctioning through silence, allowing this intolerance to consume us and everything that's good in us.

To end, I am reminded of a famous quote by Pastor Martin Niemoller, during the height of the Nazi programs in the late 1930s, which turned German society into a behemoth that consumed millions:

First they came for the Communists

Because I was not a Communist.

Then they came for the Socialists

Because I was not a Socialist.

Then they came for the trade unionists

Because I was not a trade unionist.

Then they came for the Jews

Because I was not a Jew.

Then they came for me

And there was no one left

To speak out for me.