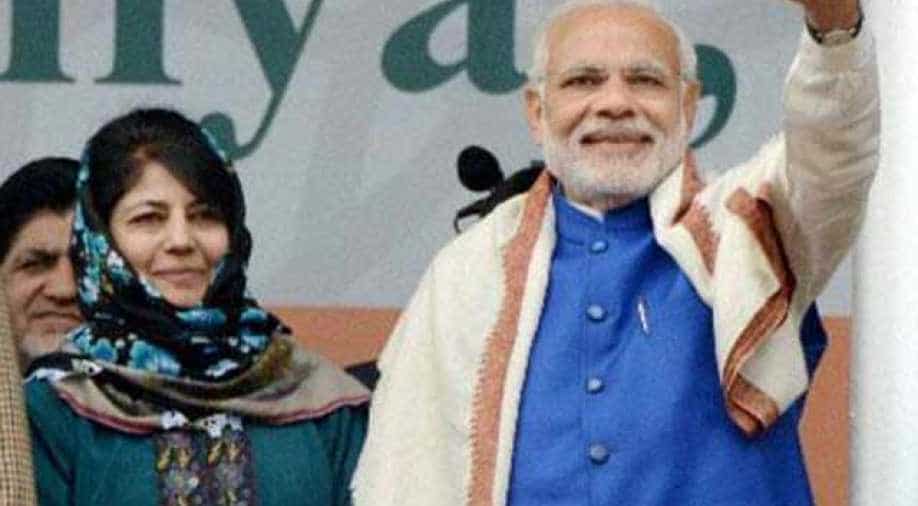 Jammu and Kashmir Chief Minister Mehbooba Mufti today said only Prime Minister Narendra Modi can resolve the Kashmir problem as he has a strong mandate and appealed to him to pull the valley out of morass.

Mufti, whose government is battling spiralling protests in the valley, said the situation is the result of pent up anger due to failure of the UPA government to continue with the policy started by the previous NDA government in Jammu and Kashmir during her father Mufti Mohmmad Sayeed's rule.

"I say today with authority and I will be criticised for it also. If anyone can find a solution to Jammu and Kashmir problem, it is Prime Minister Narendra Modi.

"He (PM) has a strong mandate. Whatever decision he takes, the country will support him," said Mufti, whose party is running a government in coalition with the BJP.

"If anyone can take us out of the sticky spot, it is Prime Minister Modi. The nation will support whatever he decides...it is may earnest appeal...," she said.

The CM was addressing a gathering after inaugurating a flyover here.

Hailing the Prime Minister's decision to visit Lahore on December 25, 2015, she said that it was a sign of strength not weakness.

"He has the mandate of the people. This is his biggest power. He went to Lahore and met the PM of that country. This is not a sign of weakness but an indication of strength and power," she said.

She took a dig at former Prime Minister Manmohan Singh, saying he did not have the courage to visit Pakistan.

"Before him (Modi), a Prime Minister had also desired to go to Pakistan for over ten years. He wanted to see his home there," she said, with naming Singh.

"He also would have tried to end the confrontation between the two countries, and bring J&K out of this unfortunate situation, but he had no courage to do that."

She gave credit to former prime minister Atal Bihari Vajpayee and former chief minister Mufti Sayeed for starting the "chapter of peace" in Jammu and Kashmir in 2002.

"They tried their best to bring out Kashmir out of this unfortunate situation. He was successful to a large extent in shortest of period," Mehbooba said.

"There was ceasefire (along Indo-Pak border) during Vajpayee's rule. There were talks with L K Advani (in Kashmir). There was beginning of the process of opening (cross -LoC) roads."

The chief minister said militancy declined during that period and there was peace on the borders.

"These were not small developments. But unfortunately Mufti was out of the government and Vajpayee ji left, and the process came to grinding halt," the PDP leader lamented.

She alleged that the UPA regime at the centre and the state government did not carry forward the process thinking "everything is peaceful and there is no need to do anything further".

This lava has now spread to the streets and we are forced to face this situation," she said.

The CM said while her government is trying to improve the situation in Kashmir, there are some forces which do not want it.

"Mufti sahib, who had seen a dream, shook hands with the Prime Minister of our country Narendra Modi, who has got the mandate of the people," she said.

As the chief minister was speaking, former Minister and senior Congress leader Gulchain Singh Charak interrupted her speech and demanded setting up of two civil secretariat in Jammu and Srinagar capital cities.

Charak, who later walked out of the hall in protest, was heckled by some workers after conclusion of the function.