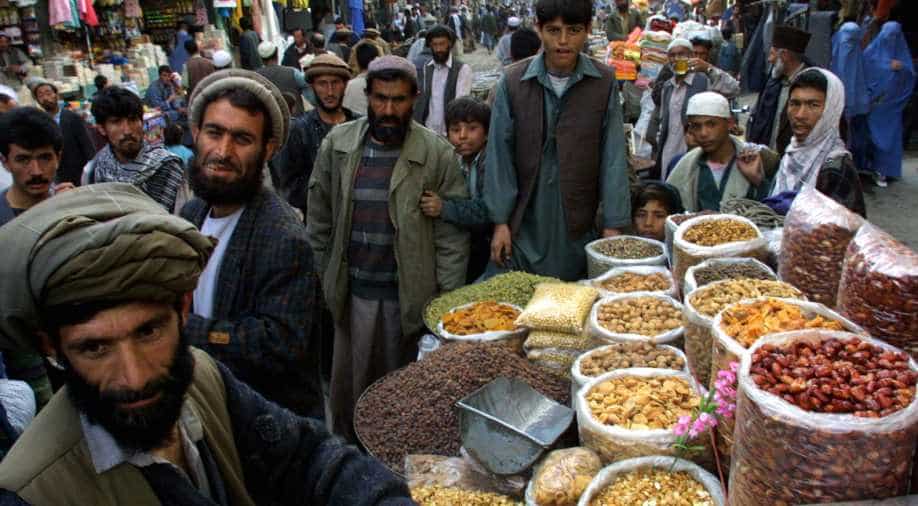 An Afghan man sells dried fruits and nuts at a market in central Kabul. Photograph:( Getty )

Afghanistan's government is boosting its revenues by imposing a new tax regime. The aim is to stop the country's dependence on international aid, but several private business did not welcome the move complaining that it hits them hard, making it difficult to hope in a possible economic recovery.

After decades of conflict, Afghanistan's economy is struggling to get back on track. The country is ranked 183 out of 190 countries in the World Bank's Doing Business index and the tax drive does not make it easier.

Local firms complained that they are constantly targeted by tax officials who do not give them any possibility to delay payments nor any other flexible approach and this chocks their businesses preventing them to plan new investments or hire new resources.

"I personally planned to start two or three small manufacturing businesses but I decided not to," says Sadiq, a local businessman. "I haven't been as disappointed at any time in the past 30 years."

Afghanistan's finance ministry says it expects to raise almost 2.5 billion USD in revenues in the first three months of 2017. It is 500 million USD above target and it could be a vital achievement since cash for aid and foreign armed forces begins to slow.

International donors pledged to invest 15.2 billion USD to 2020, but after that, the future is unclear and the country is willing to move on and find its own way to develop.

"Taxes are nobody's favourite, especially those who have to pay and that's why you see resentment," said Khalid Payenda, director-general for macro fiscal policy at the finance ministry.

"Their (the government) only concern is raising a certain amount of revenue. How it's done is of no concern to them," said Mustafa Sadiq, whose firm Omaid Bahar Fruit Processing usually employs around 200 staff and double that number at peak times. "They're not increasing the volume of business, they're just increasing taxes on whatever there is left."

The government needs to increase its revenues since much of the country's 20 billion USD, mainly carpets and fruit, has always operated informally, paying no taxes at all.

This new reform comes in a difficult moment for the Afghan private sector: 2016 saw a loss in new companies registration which dropped by 30 per cent and many local firms are suffering due to cheap imports from Pakistan and Iran.

The Afghan Taxation system had already been reshaped at the end of 2015, when the government decided that the main tax rate was doubled from two to four percent. Afghan companies must now pay four times a year.

"If the government is under pressure, then so is the private sector," said Fawad Saafi, whose Millifactories group makes products ranging from PVC tubes to foam mattresses. His workforce has dropped from 700 to under 200 as economic growth stalls and business dries up.

Several companies reported about bribery and arbitrary tax collection saying that too often the system is inefficient and open to abuse.

"The feeling amongst many business people is that if some bureaucrats drive past a successful business they'll find a way to extract money from it," said Franz-Michael Mellbin, EU Special Representative to Afghanistan. "That makes for a really hostile business environment and it doesn't need to be."

The real challenge in a country where corruption and tax evasion are rampant lies in the implementation of a functional collection rather than on imposing new tolls.

In Afghanistan economy is also strictly connected to security. Large parts of the country are under control of Islamist insurgents and creating jobs could be a very effective way to prevent young citizens to join their ranks, the only way the country has to secure peace and therefore prosperity.