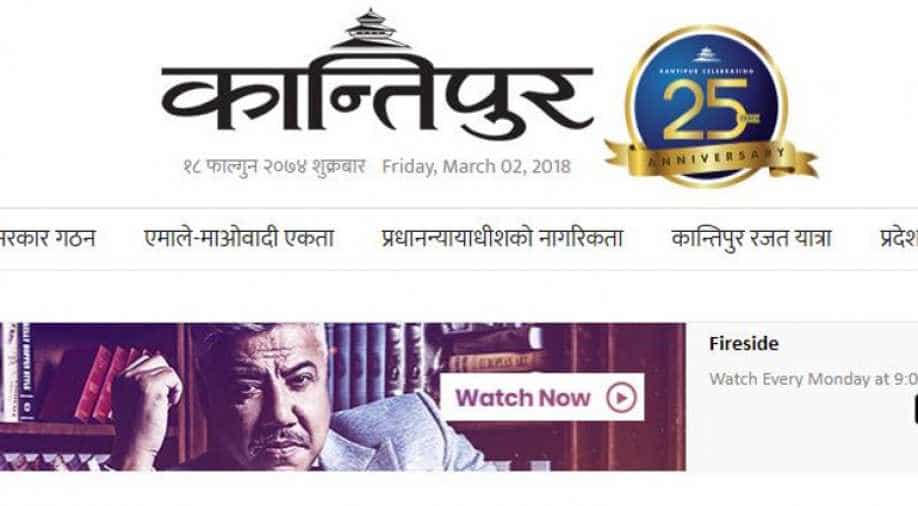 Screenshot of the masthead of the Kantipur Daily website. Photograph:( WION )

Nepal's largest newspaper is due in court Friday summoned by the country's chief justice for articles critical of him, in a case widely condemned as an attack on press freedom.

The Kantipur Daily was subpoenaed by chief justice Gopal Parajuli on contempt of court charges for a series of articles that said the country's top judge had given different dates of birth on various official documents.

Judges in Nepal have to retire at 65 and the suggestion is that Parajuli knocked years off his age to hold office for longer.

In the subpoena issued Sunday by Parajuli -- who will preside over the case despite being directly implicated in it -- the newspaper is accused of using "objectionable language" and repeating "imaginary facts".

"The articles published by the Kantipur Daily are intended to obstruct the judicial process and weaken the judiciary by disrespecting the court and spreading confusion about the court and its justices," according to the order seen by AFP.

Multiple news outlets have carried reports that the chief justice's official documents show as many as five different dates of birth, but only the Kantipur Daily -- Nepal's largest newspaper by circulation -- has been singled out by the court.

Media watchdog Reporters Without Borders slammed the move against the newspaper and urged lawmakers to impeach the top judge.

"It shouldn't be necessary to remind a chief justice that you cannot be judge and party at the same time," said Daniel Bastard, the watchdog's Asia-Pacific expert.

"This is a completely unacceptable case of prior censorship that could have dire consequences for media freedom if it sets a legal precedent."

Akhilesh Upadhyay, the editor-in-chief of Kantipur Daily's English-language sister publication, The Kathmandu Post, said the court order was motivated by a personal vendetta and said the newspaper would fight the charges.

"He has put a muzzle on the press," he said in an interview with AFP earlier this week.

Parajuli was appointed chief justice nine months ago, and even by the youngest age on his official documents, is due to retire in two months.

Kantipur Daily's editor-in-chief, the chairman, a company director and a reporter are due in court Friday.

They could face up to a year in jail if found guilty.

Nepal's media industry has boomed since the country's king was overthrown a decade ago following a brutal civil war, spawning dozens of newspapers.

A new constitution passed in 2015 proclaims complete press freedom and bans censorship of news, which was common during monarchic rule.

Journalists in the Himalayan nation do still face intimidation and arrest, particularly if reporting on issues deemed by authorities to affect national unity.

Nepal ranks 100 out of 180 countries in Reporters Without Borders' press freedom index.