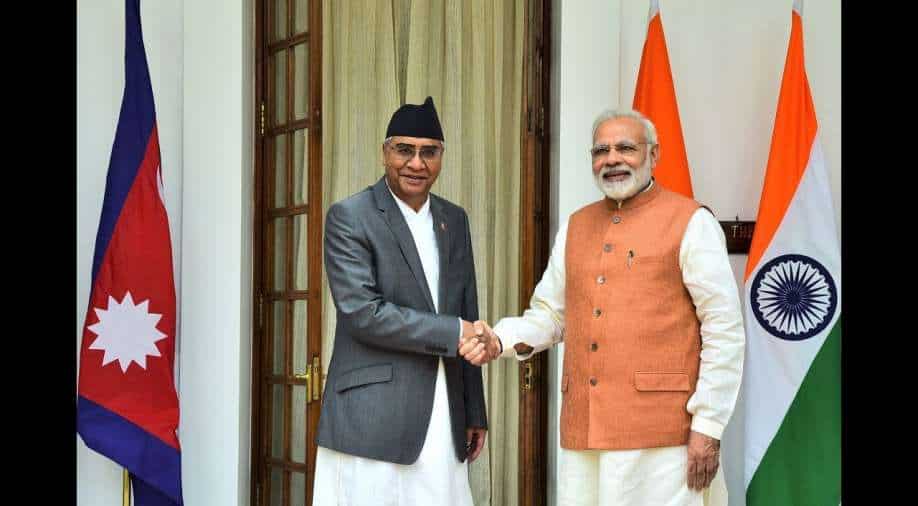 The train service would cover a distance of 35 kilometres from Jayanagar in India's Bihar state to Kurtha in Janakpur, Nepal

This will be his first official bilateral visit since he assumed the Prime Minister’s office in July last year.

However, there has not been any official announcement from either side.

As per sources, Indian Prime Minister Narendra Modi and the Nepali PM will jointly inaugurate the Kurtha-Jaynagar Railway on April 2 in New Delhi.

The train service would cover a distance of 35 kilometres from Jayanagar in India's Bihar state to Kurtha in Janakpur, Nepal.

The Department of Railways in Nepal told WION that they have not received any information on the visit of the prime minister.

Director-general of the department Deepak Kumar Bhattarai said, “Our department has not received any information on the visit but the preparation for the inauguration has been underway since long and we are hopeful that in near future the railway will come into operation."

Speaking on the benefits of the railway line for Nepal, Bhattarai said, “Nepal Railway Company Limited will manage the operation of the railways. All form of transportation is important for Nepal. India's railway network is among the largest in the world, and is benefiting people from all walks of life. This railway line will do the same for Nepal and will complement all modes of transport.”

India has borne the cost of the construction of the tracks and stations, Bhattarai said.

“Built as part of Government of India’s commitment of NPR 8.77 billion for Jaynagar-Bijalpura-Bardibas rail link, it passes through the historical city of Janakpur and will further boost people-to-people connectivity between India and Nepal,” Indian Embassy in Nepal had earlier said in a tweet.

The new railway line is being constructed under the India-Nepal Development Partnership programme, with financial grants being provided by the Government of India. It covers a total distance of 69-kilometres between Jaynagar-Janakpur-Bardibas. Construction work on this project started in 2014.

As per the plan, the railway track for this project is being constructed in three phases. Construction of the first phase of the project of 35-km links Jaynagar and Janakpur/Kurtha.

The 35-km rail link connecting Jayanagar and Kurtha will come into operation after the joint inauguration of the prime ministers. It will take one and a half hours to reach Jaynagar to Kurtha.

The train would take a halt at eight stations and can carry 1,350 passengers at a time.

“Initially, the train will run once a day from Kurtha to Jayanagar on a regular basis. It is expected that the Nepal Railways Company Limited will increase the frequency gradually”, another official at the department told WION.

“Railway fare for the 35-kilometre section is Rs 90 (US $1) per person in ordinary class and five times more will be charged per person in the AC class,” the official added.

It is expected that the railway line will increase the trade between the two countries.

Since February, Nepal has been conducting dry tests of the railways and the ‘results have been satisfactory’.

India will also send 26 technical personnel, including drivers and engineers.

With the operation of the Jaynagar-Janakpur section of the Nepal Railway, religious tourism is likely to boom as many people from India would get an opportunity to visit Janakpur, which happens to be the holiest place for the Hindu pilgrims of the world as Goddess Sita, wife of Lord Ram, was born there.

Over the years, Nepal has been receiving active cooperation from India for the development of its infrastructural facilities, like roads, airports, and Integrated Check Posts at the customs offices.

In this effort, the Jaynagar-Janakpur train service has added a new milestone in Nepal-India relations.

Apart from this, Director-General Bhattarai said a study of a railway line from Raxaul, India, to Kathmandu is also underway which is being funded by India.

"The study is being funded by India, but there is no confirmation if India will be part of the implementation of the project."

The initiation of the visit was exchanged between the two countries in October last year, as per sources, but the visit was later cancelled due to increasing Covid cases.