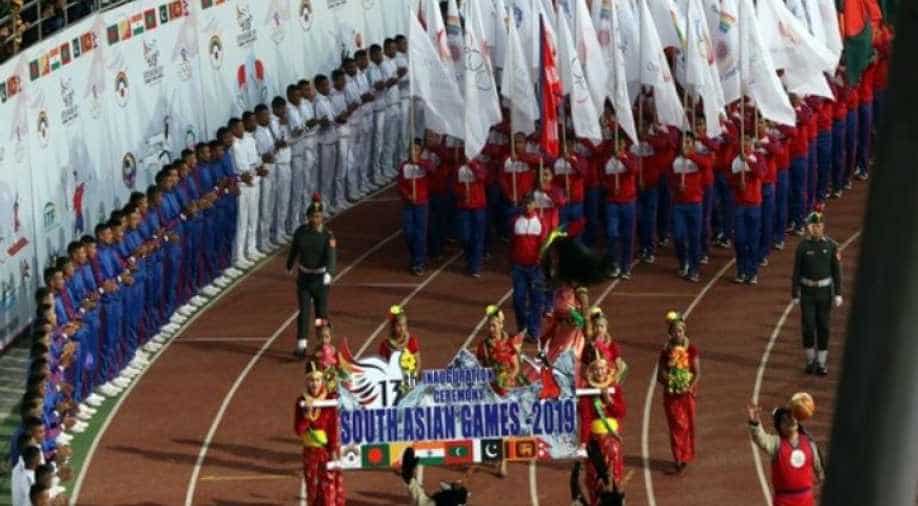 The Nepali President declared the multi-sports event of SAARC open at the newly-constructed Dasharath Stadium in the presence of about 30,000 people

The Nepali President declared the multi-sports event of SAARC open at the newly-constructed Dasharath Stadium in the presence of about 30,000 people.

The inaugural ceremony kicked off with march-past by athletes from the SAARC countries, India, Nepal, Pakistan, Bhutan, Afghanistan, Maldives and Sri Lanka. The SAG's torch was brought to the stadium after it was toured in all the seven countries.

The ceremony saw a glittering performance of a troupe of 7,500 artists and students, who performed the traditional Lakhe dance, in the stadium, that was decked with lights, flowers, frills and flags.

The ceremony was marked with the bursting of fireworks amid the cheers and applause of spectators at the stadium. 'Krishnasaar (blackbuck antelope) is the official mascot of the 13th SAG.

The SAG is being held in Nepal for the third time and after a gap of 20 years. Last time, Nepal hosted the regional game back in 1999.

During the 10-day event, around 3,000 athletes from the seven SAARC countries will compete in 26 different sport disciplines in different venues across Nepal, including Kathmandu, Pokhara and Janakpur.

The athletes will be competing for 324 gold medals and the same number of silver medals.